Goblins: Life Through Their Eyes

Hangingout and spending time with his son and members the Goblin Party.
Lecturing others.

Defend his fellow clanmates and Goblins from attacking Adventurer Parties.

Level up his adventurer status.(All Ongoing)
Rescue Fumbles from the city of Brassmoon.
Save the captive monster races from the Brassmoon dungeon
Defeat Dellyn Goblinslayer.(All succeeded)

Thaco is one of the main characters of the D&D inspired dark fantasy webcomic series, Goblins: Life Through Their Eyes. He is a Goblin elder of the Cryptic Fall Clan as well as one of the oldest and strongest warriors within the clan, the father of Complains of Names and a Monk Class Adventurer of Goblin Adventuring Party and later its defacto leader after the death of Chief.

Thaco and the rest of the GAP party are currently fighting to save their dimension from the unleashed hell demon, The Sacred that was imprisoned in the Axe of Prissan.

Before the events of the main story, Thaco was was captured in his youth by Delly Goblinslayer and Saral Caine, a pair of sadistic adventurers. During these period Thaco would received his signature scars and lose left ear from Golbinsalyer's daily torture sessions and at some point he would eventually escape captivity and return home. 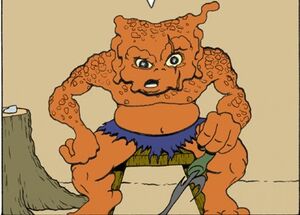