Daughter of Zeus
Lieutenant of Artemis
Pinecone Face (by Percy)

Lieutenant of the Hunters of Artemis

Thalia Grace is the daughter of Zeus (the Greek God of the Sky) and the late Beryl Grace, the older sister of Jason Grace (whom Beryl had with Zeus's Roman form Jupiter), the lieutenant of the Hunters of Artemis and a character in the Greek mythology series Percy Jackson and the Olympians and it's Greco-Roman sequel series The Heroes of Olympus.

In the films, she as portrayed by Paloma Kwiatkowski, and Katelyn Mager younger.

Thalia was born on 22 December 1987[1] to an actress named Beryl Grace and the Greek sky god Zeus. When Thalia was seven, Zeus returned this time in his Roman form Jupiter and had a son with Ms. Grace named Jason. When her mother gave Jason away to Hera, Thalia left home and when she was twelve she met another demigod, a fourteen-year-old son of Hermes named Luke Castellan and they ran away from two separate homes, and together they ran across the country fighting monsters.

Eventually, they found a seven-year-old daughter of Athena named Annabeth Chase and eventually found by a satyr named Grover Underwood who brought them to Camp Half-Blood. Thalia gave her life for her friends who ran on ahead while she fought a horde of monsters. But Zeus taking pity on his daughter turned her soul into the tree that resides on Camp Half-Blood Hill.

At the very end of the Sea of Monsters Thalia makes her debut. With the Golden Fleece returned, it healed more than the restoration of the tree, it also released Thalia, who would forever be a main character of the series.

Thalia is a main character in the third book. She leads the quest to take on the Titan Atlas. She is believed to be the demigod that the ultimate prophecy revolves around, but in the end, she instead joins the Hunters of Artemis.

Thalia returns for the final battle, where she and her hunters help the fight on Olympus alongside Percy Jackson and friends.

It is revealed in the Lost Hero main character Jason Grace is actually Thalia's little brother, who had been missing since he was a child. The two reunite, and she makes an appearance alongside her hunters.

She meets with Reyna at San Juan to help with the giant Orion, who is hunting them.

Thalia is an exceptionally brave, strong, and caring girl, though she can be profoundly stubborn, prideful and assertive, much like her father Zeus.

In some ways she's similar to Artemis, as she enjoys being around her fellow hunters and is a great fighter. Is also very loyal to those she trusts and respects. Unlike her fellow hunters, Thalia does not mind being around boys. When Thalia meets Apollo for the first time, she refers to him as "hot", and not just because he is the sun god.

Thalia Grace has acrophobia, a fear of heights which is ironic because her father Zeus is lord of the sky. 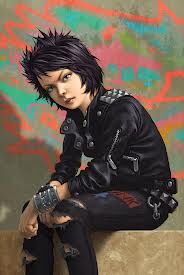 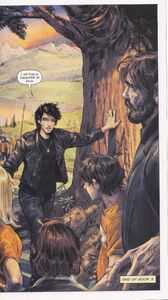 Thalia in the graphic novel. 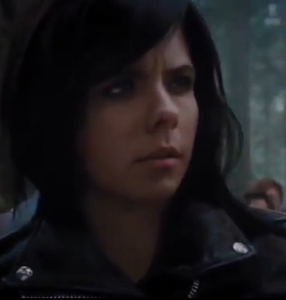 Thalia in the Sea of Monsters film.
Add a photo to this gallery

Retrieved from "https://hero.fandom.com/wiki/Thalia_Grace?oldid=2151086"
Community content is available under CC-BY-SA unless otherwise noted.