Prevent his son from becoming a hitman (determinant), Help Shepard against the Collectors and Reapers

Thane Krios is a major character in the original trilogy of the video game series Mass Effect. Specifically, he is a main character in Mass Effect 2 and a supporting/posthumous character in Mass Effect 3. He is part of an endangered species called the drell who was trained by the hanar as an assassin and becomes one of Commander Shepard's squad for the suicide mission against the Collectors, which he considers fitting as he is dying from Kepler's Syndrome, a terminal disease exclusive to his people.

He was voiced by Keythe Farley.

Thane is a drell assassin. The Illusive Man calls Commander Shepard to recruit multiple high level operatives, and Thane made the list. It is learned that Thane has Kepler's Syndrome which gives him a limit time before he dies. He befriends the commander, but besides that the only person who he truly feels for is his son Kolyat.

Thane returns in Mass Effect 3, where he defended the Salarian Councilor against Cerberus assassin Kai Leng, but died in the process.

Despite the fact that he's dying from a terminal illness, Thane is generally a very calm and collected person who speaks in a gruff, monotone voice; it is noted by Shepard that he doesn't act like a dying man. Thane is determined to make the universe a better place before he dies, as atonement for his life as an assassin, as he considers his assassinations of horrible people merely "removing the bad" from the universe rather than "making things better". Due to the fact that he's dying, he isn't at all bothered by the fact that the attempt to take down the Collectors was a suicide mission, even claiming that such a mission will do nicely as his last job.

Having been trained to be an assassin since he was 6 years old (and been killing since he was 12), Thane rarely feels any regret or remorse for killing, often saying that he brings death to those who deserve it. He claims that his employers were the ones who killed his targets and his body was merely the tool they used, even comparing it to a gun. He also says that, as an assassin, he is a weapon, and that he is not the one who chooses to kill. This is because drell see their body as a vessel and accept that it is not always under their control. In other words, he isn't conscious when he kills his contracts. He compares this to the human belief that there is a soul distinct from the body responsible for moral reasoning after the body's death and that their belief is just a bit more literal.

However, while this philosophy spiritually absolves Thane of his crimes, that convenience is undermined by the eidetic memory native to his species; the ability to perfectly recall every single act of murder he committed over the years, as well as every mistake he's ever made, has weighed down on his conscience. Thus, Thane cannot help but feel regret over his actions at times. Of particular note is his wife's murderers, since he killed them of his own free will rather than because he was following the orders of a superior. He can lose himself in bad memories just as easily as he can in good ones, and while it's easy to escape memories where he's taken bullets, since he can look at himself and see that he's fine, it's much harder to escape memories of despair. It's because of this that he admits to sometimes envying the imperfect memory of humans (and other species in general). Despite this, Tali considers him to be very confident for being able to hold himself together in spite of being able to remember all this, saying that if she could remember every mistake she made, she'd be a nervous wreck.

Although he often says that the people he kills deserve death, Thane nonetheless shows a subtle but definite degree of self-loathing; when Shepard first meets him, he prays after killing Nassana Dantius and states that prayers for the wicked must not be forsaken. When Shepard questions him on why he's praying for her, he explains that the prayer is actually for him. It's because of this that he attempts to prevent his son Kolyat from becoming a hitman and making the same mistakes he did. He even tells Kolyat that, while he may have taken many bad things out of the universe, he is the only good thing he ever added to it. Thane is also very strict about his methods, shown in his absolute focus on protecting civilians and disapproval towards Renegade-Shepard's rough interrogation techniques, as well as questioning his/her execution of Joram Talid.

Thane is unusual among drell in that he follows the old polytheistic religion of his species rather than adopting those of the hanar or asari and spends much of his time in prayer and meditation, even within his work. To find a target, he prays to Amonkira, the lord of hunters; when defending another, he prays to Arashu, goddess of motherhood and protection; after taking a life, he prays to Kalahira, goddess of oceans and the afterlife. 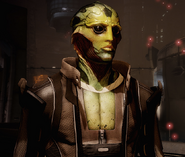 Thane with his son, Kolyat

Add a photo to this gallery
Retrieved from "https://hero.fandom.com/wiki/Thane_Krios?oldid=1733912"
Community content is available under CC-BY-SA unless otherwise noted.