The Ancient One (Marvel Cinematic Universe)

The Ancient One
Sorcerer Supreme

Sorcerer Supreme
Leader of the Masters of the Mystic Arts

Protect the world from mystical threats.
Save her former student Kaecilius from his corruption by Dormammu (failed)
Guide Doctor Strange to become better sorcerer that can succeed her and ensure he won't become as bad as Kaecilius (succeeded).
Stop Kaecilius and the Zealots (succeeded post-mortem by Doctor Strange).
Give Hulk the Time Stone to save the future (2012 version, succeeded).

The Ancient One is the overarching protagonist of the 2016 movie, Doctor Strange, and a minor character in Avengers: Endgame.

She was the Sorcerer Supreme and the leader of the Masters of the Mystic Arts, who mentored Doctor Strange in the use of magic following his car accident.

She is portrayed by Tilda Swinton.

The Ancient One's past remains a mystery, as Karl Mordo notes that no one knows her age but that she is of Celtic origin. She comes from a lineage of sorcerers who were dedicated to defending the world from mystical threats, and maintaining the natural law of the world. Once she was given the title of sorcerer supreme, the Ancient One would teach anyone who would travel to Kamar-Taj, and they would become her disciples. Believing that the world needed to be protected from dangerous threats, the Ancient One would harness energy from the dark dimension to live for centuries. By modern day, the Ancient One learned of Doctor Stephen Strange, knowing that he would become her successor and believed that he would be one of the best sorcerers of the millennia.

In 2012, when the mad Titan Thanos tasked the Norse god Loki with invading Earth, he also intended for his minion to obtain the Infinity Stones to wipe half of the universe. Knowing that the time stone was in danger of being taken, the Ancient One protected the New York Sanctum from the Chitauri. The threat was stopped by the avengers, who managed to destroy the Chitauri's command center and apprehend Loki. The Ancient One continued to help her students live and go beyond their demons, but failed with one named Kaecilius, who decided to get energy from the dark dimension to obtain immortality. Though she had forbidden this, Kaecilius learned that she was harnessing energy from the dimension, and decided to leave the mystic arts with his followers. She would battle her former disciples, but failed to defeat Kaecilius, as he escaped to another location.

Stephen Strange arrived to Kamar-Taj with Karl Mordo, and the Ancient One managed to convince the skeptic that magic was real. Despite him begging to be taught how to use it, the Ancient One denied him, as he reminded her of Kaecilius with his arrogance and persistence. However, she would go back on her word after being convinced by Mordo, and she decided to teach him how to harness eldritch magic alongside Karl. During his training, Kaecilius and the Zealots arrived to the temple, and after they were briefly subdued, Strange accused her of drawing power from the dark dimension. She denied his accusations, but the truth was revealed by Kaecilius in New York's mirror dimension in front of both Strange and Mordo. The Ancient One then attempted to stop Kaecilius, but was mortally wounded by him before falling to the Earthly plane.

Despite her injuries, Strange decided to take her to Metro General Hospital and have her receive medical attention from Christine Palmer and Nicodemus West. Before dying, the Ancient One left her body into the astral world to speak with Strange, where she revealed that she knew when she would die and that she hated drawing power from the dark dimension. She then explained that she did so because sometimes to bend the rules, and that Strange understands that. The Ancient One also advised him to work with Mordo to stop Dormammu, and vanished from the astral plane. Strange would heed her final words, and managed to stop Dormammu by making a bargain to leave Earth alone and to take the Zealots with him.

After Dormammu was stopped, Doctor Strange was given the title of "sorcerer supreme", and continued to serve the mystic arts to protect the world from threats. However, the Ancient One's actions also had a negative effect on Mordo, who became disillusioned with her cause after she harness magic from the dark dimension, and Strange abusing the Eye of Agamotto when dealing with Dormammu. As a result, Mordo would start to travel across the world to eliminate sorcerers who were abusing their powers.

According to Karl Mordo, the Ancient One is "steadfast, but unpredictable; merciless, yet kind." This is shown when she was willing to kill multiple Zealots in combat and initially refuse to help Stephen Strange when he first came to Kamar-Taj due to his arrogance, though she did so for the sake of protecting the world from the rogue sorcerers and to ensure that other sorcerers did not become like Kaecilius and his followers.

While she enforced rules on the Masters of the Mystic Arts against breaking the laws of nature or using their power for god-like feats, such as manipulating time or becoming immune of death, she was willing to break her own rules to continue to personally ensure that they were followed and that the world was safe, though she never wanted to do so.

This lead her to draw power from the Dark Dimension to become immortal, an act which she herself forbade. Since Doctor Strange was similar to her in her breaking the laws of nature to save the world, she believed that he and Mordo, the latter of which was completely devoted to following her rules, would need to balance each other out in order for them to protect the world when she died. 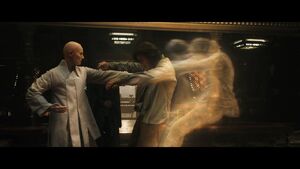 The Ancient One pushes Strange in his astral form.

The Ancient One preparing to introduce Strange to the mirror dimension. 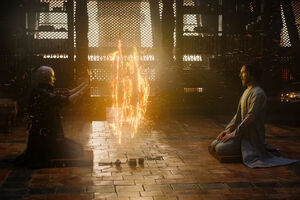 The Ancient One teaching Strange magic.

The Ancient One in Avengers: Endgame.