The Basterds were a group of 11 (initially 9 soldiers), 8 Jewish and 3 non-Jewish, whose sole mission was to inflict terror in the Nazi occupied France during WW2. They were led by Lt. Aldo Raine.

The Basterds were founded sometime after the start of World War II. 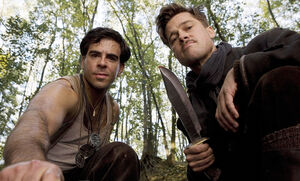 Aldo and Donny at the end of the film