Regarded as one of the best soldiers in history:

End the Cold War and do whatever her commanding officers demand (main), keep up the act of defecting to the Soviet Union, let her apprentice finally kill her (succeeded)

The Boss is the false secondary antagonist of Metal Gear Solid 3: Snake Eater and the former mentor of the game's protagonist, Naked Snake. She was the founding leader of the Cobra Unit, in which she was known as The Joy.

She was voiced by Lori Alan in her few appearances, who is the same voice actor of Diane Simmons in Family Guy, and voices Pearl Krabs in SpongeBob SquarePants. Kikuko Inoue voiced the character in Japanese.

When Naked Snake is sent on a mission to infiltrate a guarded factory and retrieve Nikolai Sokolov, a Soviet scientist wanting to defect to the USA, The Boss offers herself as a radio contact to offer guidance and support. However, once Snake is sucessful in bringing Sokolov to safety, The Boss reveals herself and summons her reunited unit to take Sokolov, then claims that she is defecting to the GRU faction of the Soviet Union.

She then presents Yevgeny Borisovitch Volgin, Colonel of the GRU, with two Davy Crockets as a gift. To protect his identity, Volgin tries to kill Naked Snake, but The Boss intervenes and throws Snake into a deep gorge, claiming that she should be the one to do it as he was her pupil. She, however, seemed to know that he would in fact survive, which he does.

Naked Snake is sent back into Tselinoyarsk with three tasks: rescue Sokolov, kill Volgin and eliminate The Boss. Shortly after he arrives, he meets up with The Boss, who easily strips him of his weapon and tells him to abandon the mission, saying that he could reach the border within a few hours. She then destroys the drop pod Snake arrived from creating a large explosion to attract guards, before leaving the scene on her horse and injuring Snake's hand. Snake sees her later in the mission near a warehouse, assuring Volgin that her unit would be able to eliminate him. Snake later sees her in Volgin's base, Groznyj Grad doing the same.

When Snake is caught impersonating Volgin's lover in order to locate Sokolov, The Boss intervenes, revelaing his identity and easily overpowering him. She is also present at Snake's torture session, claiming that a transmitter on him was placed by her to track him (though in reality it was placed by EVA, an ally of Snake pretending to work for Volgin), and almost cutting his eyes out when Volgin tells her to prove her loyalty, but is interrupted by EVA. She overpowers him once more when Snake is caught reentering Groznyj Grad, but with more difficulty. Volgin reveals his ownership of the Philosopher's Legacy, a massive secret cache of funds contributed by world superpowers, and gives the microfilm detailing its location to The Boss telling her to keep it safe. The Boss also offers to take EVA away, after she is found out to be a spy.

After Naked Snake defeats Volgin, EVA finds him, revealing that The Boss had let her go and that she was waiting for him at Rokovoj Bereg, a large field of white flowers. When Snake arrives, The Boss confesses her past to him, that she had lost a child she had given birth to on the battlefield, and was seperated from her unit when the Cold War broke out, even being forced to kill her old lover, The Sorrow. She comments on how soldiers could only exist as tools for governments, with enemies and allies changing at a whim, and that the US and Soviets could very likely become close allies again after the Cold War. She thanks Snake for listening to her story before commanding him to finish his mission, even calling for Russian fighters to bomb the area in ten minutes to ensure that at least one of them would die.

After a grueling battle where she is finally defeated by her most beloved disciple, she gives Naked Snake the microfilm containing the location of the Philosopher's Legacy, telling him to keep it safe. She gives him her gun, the Patriot, telling him to use it to kill her. Naked Snake would then see what appeared to be her ghost along with that of The Sorrow, finally smiling together while fading away.

The next day, EVA would reveal to Naked Snake the true motives of The Boss. Her mission was initially to interrupt the Virtious Mission and defect in order to gain Volgin's trust to find the Philosopher's Legacy, but after Volgin fires the American Davy Crockett on Russian land, plans would have to change. Her mission was then to subtly assist Snake while keeping near Volgin, before allowing herself to die by his hand.

She accepted that she would have to be branded a traitor by the country she sacrificed everything for, but wanted Naked Snake to know the truth so she could live on in the memory of her pupil. After the ceremony where Naked Snake inherits her title, becoming Big Boss, he places the Patriot and a bouquet of flowers on her grave before giving her a final salute.

The Boss's Horse is a character appeared for the first time in "Metal Gear Solid 3: Snake Eater".

The Boss's Horse an Andalusian that served as The Boss' trusted steed.

The horse dies during the events of "Metal Gear Solid: Peace Walker". 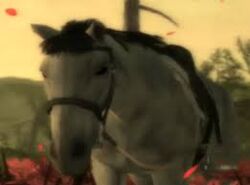 Retrieved from "https://hero.fandom.com/wiki/The_Boss?oldid=1895603"
Community content is available under CC-BY-SA unless otherwise noted.