Heroes Wiki
Register
Don't have an account?
Sign In
Advertisement
in: Articles under construction, Male, Animals,
and 41 more

The Cat in the Hat (Live-Action)

Dr. Seuss' The Cat In The Hat

Having fun also teaching Sally and Conrad how to enjoy themselves.

Help Sally and Conrad turn their lives around and defeat Larry Quinn (all succeeded).

Sally and Conrad Walden live in the city of Anville with their single mother Joan Walden who works for neat-freak Hank Humberfloob. One day, Mr. Humberfloob firmly warns Joan that she will be fired if her house is messy for the upcoming meet and greet party?

At the house, Conrad trashes the house, causing their dog Nevins to run down the street in fright. Joan punishes Conrad for a week while re-cleaning the house. Their next door neighbor, Larry Quinn, whom Joan is dating to Conrad's dismay, brings back Nevins and Sally is grateful.

When Larry leaves, Joan is called back to the office again, leaving the kids with Mrs. Kwan, a lethargic babysitter and making sure that they're forbidden to enter the living room which's being kept pristine for the upcoming party.

Larry is constantly on the lookout for any trouble that Conrad causes as he wants nothing more than to send him away to military school, earning Conrad the reputation of "troublemaker" while his sister is characterized as "perfect and well-behaved".

Once their mother leaves and Mrs. Kwan is falling asleep, Sally and Conrad discover a humanoid, oversized talking Cat in a Hat in their house. Then, the Cat wants them to learn to have fun, though the children's pet Fish doesn't want the cat around while Joan is away.

In a series of antics, the Cat ruins Joan's best dress, jumps on the living room's couch and bakes cupcakes that explode. In the process, he even releases two troublemaking Things from a crate that he explains is actually a portal from their world to his.

Despite the Cat's warning, Conrad picks the lock anyway. When the crate's lock attaches itself to the collar of the family dog, Nevins, which escapes, the Cat and the kids go out to find it.

Then, Larry sees Nevins running across the street and sees that this is an opportunity for Joan to send Conrad to military school as punishment and allow him to move in.

Then, Larry goes to see Joan, but the Cat (disguised as a hippie) intervenes and tricks Larry into handing over the dog whichhe and the kids escape.

While distracting them, Larry sees the group drive past and races back to the house, telling Joan to meet him there. During this time, "the mother of all messes" has been emitted from the unlocked crate and enters the house.

Then, Quinn catches the kids out the front and pushes them into the house where they find it surprisingly immaculate. A hidden Cat reveals himself to Larry who stumbles back in fear sneezing (he's allergic to cats), tearing through a wall and falling off a bottomless cliff, revealing the Cat's world.

The trio navigate their way through the oversized house by riding Mrs. Kwan and find the crate sucking up things that disappears forever once gone through. Sally is nearly sucked up, but Conrad manages to put the lock back on the crate to save her and the house.

The house returns to its normal proportions, but immediately falls apart. Then, Cat tells the kids that he had planned the whole day including making not opening the crate his only rule as he knew that Conrad could not resist and also admits that he never really lost his magic hat.

The kids angrily tell the Cat to leave the house for the destruction he has caused and then brace themselves for their mother's arrival.

However, the Cat happily returns to clean up his mess with his invention the great cleaning contraption called "D.I.R.T." much to Conrad and Sally's surprise and delight. Afterwards, when everything is restored to its original cleanliness, the Cat says goodbye to Conrad and Sally as they plead with him not to go but he departs just as Joan is coming in.

Then, Quinn arrives and thinking that he has busted the kids, but when Joan sees the clean house (and a really messy Larry), she disbelieves him and dumps him. He cries, sneezes in his hands, disgusting Joan (it's possible that she has learned of his sloppiness and his true nature).

He asks her to marry him, but she closes the door and Sally locks him out of the house. Then, Conrad and Sally jump for joy as Mrs. Kwan falls asleep again. 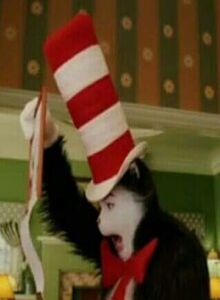 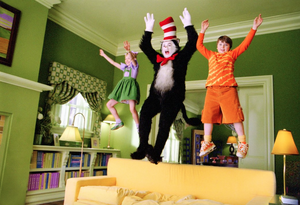 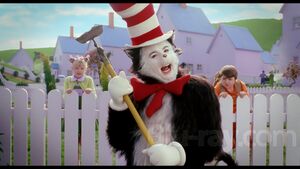 All Right Nevins time to die 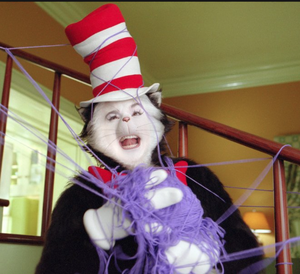 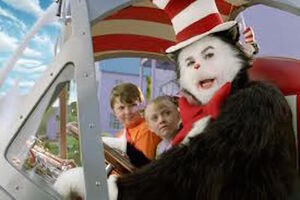 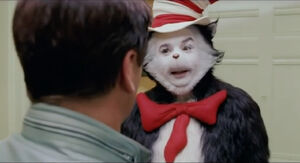 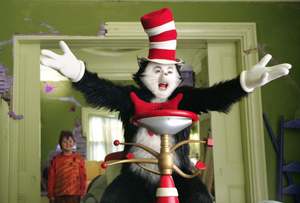 The Cat cleans up. 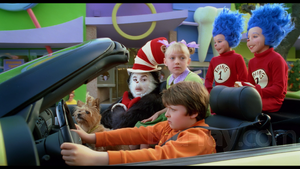 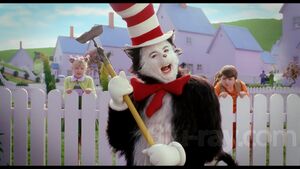 The Cat in the Hat with Conrad and Sally