Chief Herbert Dumbrowski, also known as The Chief', or simply Herbert by his close associates, is a main character of T.U.F.F. Puppy. In "Internal Affairs", it is revealed that his full name is Herbert Dumbrowski. Whoops! We shouldn't have said his name because that's private. He was once T.U.F.F.'s number one agent during his youth. But as he became the chief, he succumbed to various age-related detriments, including a bionic foot, artificial hip, false teeth, and short-term memory loss. {C Although he is small, he still retains combat skills, as well as super strength for a flea, considering he is able to "judo-flip" criminals as big as gorillas. 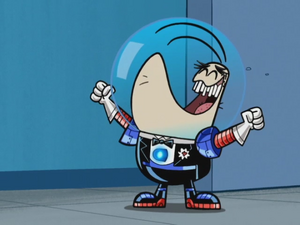