The Eds are the three protagonists in the hit show Ed, Edd n Eddy. The group consists of three boys sharing the same name, Ed, Edd and Eddy, who spend their days scamming the local neighborhood kids for money. The Eds have a strong friendship bond as evidenced in the show. The boys are rarely seen apart and are willing to work with one another to achieve a common goal. Until the Big Picture Show movie, their last scam went wrong that not only did it failed, but also severely injured the kids (except for Sarah and Jimmy) causing the Eds to escape the Cul-De-Sac from the injured kids. They intend to find Eddy's brother hoping he would help them, but instead Eddy's brother revealed himself a villain after he violently abused Eddy. Ed removed a bolt from Eddy's brother's house door to slam him. After defeated Eddy's brother, the Eds were forgiven by the kids until Jonny (Captain Melonhead) attacked the redeemed Eds only for the kids to beat him up. After beaten up Jonny, Kevin invited the Eds to come to his house for a jawbreaker party.

Edward, also known as Ed, is the older brother of Sarah, a member of the Eds (which opal so consists of his best friends Double D and Eddy) and is one of the three protagonists/main protagonist of Ed, Edd n Eddy. He is, without a doubt, the strongest of the three Eds, and rivals up there with Rolf for strongest on the show itself, having lifted homes and cars with little to no effort. In a nutshell and dimwitted, though, he can be described as kind-natured and absentminded, barely paying attention to current situations enough to truly learn from them. Yet despite his lack of focus on the day-to-day, he is fully focused on his movies and comic books, and commonly misinterprets them as reality. Even worse, though, than his inability to differentiate reality and fiction, is his hygiene, which to say the least is filthy. His low hygiene does provide humor though, even if a bathtub of gravy is disturbing.

Eddward, or also known as Edd (mostly referred to by his nickname "Double D", from his name having two D's, and to differentiate him and not to mix him up with Ed as confusion), is one of the three protagonists/deuteragonist of Ed, Edd n Eddy. He is a young inventor, hard-working student, neat freak, and of course the smartest kid in all the cul-de-sac. He is the most intelligent and well-behaved of the Eds, an observation that seems to be unfortunately unappreciated by his peers. He wears a trademark sock-like black ski hat all the time, used not only as a hat, but also as a catalyst to one of the show's biggest mysteries.

Of the three Eds, Double D is the most respected and most liked by the others due to his harmless nature, intelligence, inventions, love of peace and order, and his commitment to doing the right thing. Even Kevin at times can be respectful towards him when it's convenient. The other kids usually come to him for help and advice, or if they need something fixed. He also does a lot of research and field work, on his own from his friends, and when he isn't with Eddy and Ed, the others often invite him to do things with them and become friendly. However, being an active part in Eddy's schemes, Double D is usually punished alongside his friends as a result, and sometimes his intellectual and thinking, nitpicky nature can wear on the nerves of the others.

In the later episodes, when going to Peach Creek Jr. High, he is a straight-A student in all of his classes. He shows a strong hate toward sports because of a past, never-discussed dodgeball incident. He even went as far as escaping school to get out of gym class. Though, he is nearly incapable of performing any exercise anyways due to extreme physical weakness. He is also in the photography club at school and the editor of the school newspaper.

Double D is almost always the voice of reason and conscience of the Eds, pointing out the weaknesses in Eddy's scams or explaining how morally wrong they are, even though he is almost always ignored. Being as intelligent as he is, he is able to construct complicated machines from cardboard, signs, and various other pieces of junk the Eds can find. They often make trips to the Junkyard specifically to look for stuff like this.

His outfit consists of a reddish orange T-shirt, purple shorts, very tall red socks (seen going up and past his knees), and of course, his black hat. Part of his winter outfit consists of an orange zip-up fleece coat and he wears a plaid tie for school.

He is voiced by Samuel Vincent who also voiced as Krypto from Krypto the Superdog, Martin Mystery and Dexter.

Edward , also known as Eddy, is one of the three protagonists/tritagonist of Ed, Edd n Eddy and the self-appointed ambitious leader of the Eds.

Eddy is often selfish, and mostly works for his own interests, sometimes even neglecting his friends. Because he is frequently overambitious, deceiving, loud, and power-hungry, his peers often socially reject him. Kevin describes him as being "desperate" on more than one occasion, as Eddy is indeed starved for social acceptance and he is irritated by the fact that his rival Kevin is the most popular kid, whereas he is not even as popular as Plank.

A good example of his selfishness and greed is in "Brother, Can You Spare an Ed?" After manipulating Ed into buying jawbreakers instead of fudge for Sarah, Double D comes up with the idea of paying back Sarah, with interest. Eddy (more for himself than for Sarah) comes up with a scam that has Kevin giving Edd and Ed painful wedgies and hanging them from a tree, and afterward Eddy uses them as piñatas in a piñata scam with Jonny trying to get a prize out of them.

Eddy somewhat lives in his own world, in which everyone loves and admires him. In this world, he is more intelligent than Edd and is the literal King of the Cul-De-Sac. This dream world was shown during his part of Jonny's bedtime story in "Once Upon an Ed".

Eddy is possibly paranoid of Kevin as displayed in "The Luck of the Ed". After Ed forgets where he hid Eddy's prized magazines he suspects Kevin of stealing his magazines and that Ed, Double D and Jimmy are all in on the imagined heist.

Eddy has also displayed cowardly behavior on more than one occasion, where saves his own hide (or get free jawbreakers) rather than help his friends. Despite his horrible treatment, he shows that he does care about them and really cherishes their friendship. Although they were some episodes who showed these trait (like in "A Fistful Of Ed" or "Momma's Little Ed"), the most prominent one is in the movie, which matches with his character development: He saved Ed from an angry Rolf in the car chase, cried for an apology to Double D by admitting his faults, and smiles when Double D comforts him after showing remorse from his actions in the end of the movie.

He is voiced by Tony Sampson. 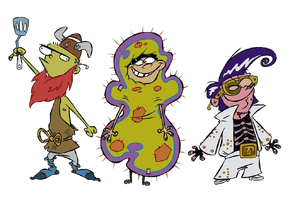 The Eds by has Halloween Costumes 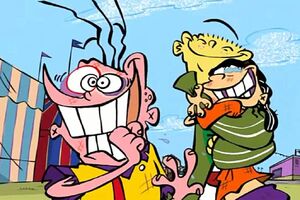 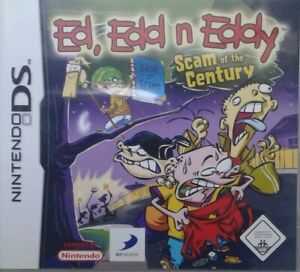 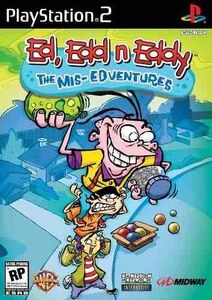 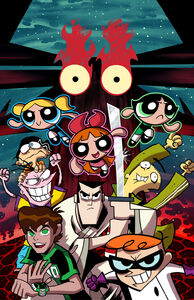