The Flash is a superhero in DC comics and media and is among the fastest heroes in the DC universe, he stars in his own series as well as being a regular member of the Justice League and has a joking personality.

The Flash in Mortal Kombat vs. DC Universe

The Flash as he appears in Injustice: Gods Among Us 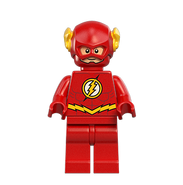 The Flash in DC Super Friends

The Flash in the CW show.