Stop the villains and criminals of Central City
Find the man who killed his mother and framed his father (succeeded).

Bartholomew Henry "Barry" Allen is The Flash from the Silver Age and later the Modern Age of comics. He is a superhero and a forensic scientist, who can channel the speed force, allowing him be the fastest man alive. Though there are many iterations of The Flash, Barry Allen is the second iteration, and is considered the most iconic iteration from DC comics.He is the main protagonist of The Flash franchise.

He was created by the late Robert Kanigher, the late John Broome, and the late Carmine Infantino, and first appeared in Showcase #4 in October of 1956.

As a boy, Barry Allen idolized the Golden Age Flash, Jay Garrick, and was inspired by the Scarlet Speedster to do his part to enforce the law, becoming a police criminologist upon graduating college. One night, while preparing for his first date with reporter Iris West, Barry was struck by a bolt of lightning that his the chemicals he was working with.

He would later discover that the chemicals had given him the power of super speed, being able to move at velocities exceeding the speed of light. Taking inspiration from Jay, Barry put together his iconic scarlet and yellow uniform, becoming the new Flash.

After several years of protecting Central City, Barry died in Crisis on Infinite Earths when he sacrificed himself to save the Multiverse from the Anti-Monitor's anti-matter cannon...converting to electricity and becoming the very lightning that gave him his powers. During the Final Crisis, Barry returned from the dead, and is once more the Flash.

Upset over the murder of his mother when he was a child, Barry goes into the timestream and rescues her. When Barry returns, he realizes that the present has been drastically altered. Bruce Wayne is dead, Superman is a government specimen and Wonder Woman is at war with Aquaman. Barry gets Thomas Wayne, the Batman of that reality, Cyborg and Superman and they try to stop the conflict in order to find out who the real villain is.

Barry runs into the Reverse Flash, who tells him that although he's relishing this reality, Barry was the sole culprit. It turns out that any tampering with the timestream through use of the Speed Force will damage and alter the present, even in ways it won't be normally (ex. Barry saving his mom shouldn't have changed Superman's arrival on earth, Bruce's parents being gunned down, etc).

Barry decides to go back and stop his past self from saving his mother. The two Barrys get into a fight but the wiser Barry wins out in the end, creating the New 52 reality. When Barry tells Batman about all this, he confirms the events by giving Bruce a letter from his father. Moved by his father's words of comfort, Batman tells Barry he's one hell of a messenger.

Bartholomew Henry "Barry" Allen was born in Fallville, Iowa to Henry and Nora Allen, and was born with a twin-brother two weeks late. Barry's twin-brother was pronounced stillborn by Dr. Gilmore, but he was actually born healthy, and was given to the Thawnes after they lost their child during birth. Barry and his twin-brother being born late was a foreshadowing of the former being always of being late. When Barry was a child, his mother was killed and his father was convicted to the crime, causing Barry to have a strong sense of justice, wanting to prove his father's innocence.

During his youth, Barry read the adventures of his favorite superhero Jay Garrick, who was the original Flash, and would act out his adventures with his friend Daphne Dean. In high school, Barry was known for being easy going, and gained a fear of roller-coasters after going on a date with a girl who put motion into his life. Barry later gained an interest in chemistry, which would help with his farming skills, and later helped him won first place in the Fallville County Fair Agricultural Competition.

The prize also included a scholarship to Sun City University, and Barry later graduated with a major in organic chemistry and a minor in criminology in three years. During his senior year, Barry helped the authorities apprehend a bank robber, and was offered a job at the Central City Police Department Scientific Detection Bureau. Barry accepted the offer and moved to Central City, and began dating news reporter Iris West.

One night, Barry returned to an experiment during an electrical storm, and a bolt of lightning streaked through a window. The lighting streak shattered a chemical cabinet and covered Barry in the electrified chemicals, and Barry decided to return home in a taxi. He had to chase the taxi, and when doing so, he ran straight past it as if it was standing still. Wanting to collect his thoughts, Barry decided to go to a diner, where he caught the spilled items from a waitress. The next day, Barry saved Iris from a stray bullet, and he realized that the chemical accident gave him superhuman speed.

Barry decided to use his powers to help people, and designed a costume that would work with a battery powered ring that he wore on his finger. He decided to call himself The Flash, which was a tribute to Jay Garrick, and decided to conceal his identity by wearing a mask. Barry worked by defeating criminals, and one of the first villains he faced was the Turtle Man.

Later in his heroic career, Barry became a founding member of the Justice League of America, and befriended the Green Lantern Hal Jordan. Barry and Hal became best friends, and the two went on many adventures both with and without the Justice League. Later on, Barry discovered that Jay Garrick was a real superhero, and became friends with the original Flash. It was later revealed, however, that Barry was part of the conspiracy of wiping Doctor Light's memory as revealed in Identity Crisis.

While dating Iris, her nephew Wally West later became a speedster himself after Barry set up the chemicals that caused him to become one. Wally wished he could become like the Flash, and a thunderstorm came and caused Wally and the chemicals to make him a speedster, and was called Kid Flash by the public. Later on, Barry proposed to Iris, who accepted and the tow married despite Professor Zoom wanting to foil the ceremony. Barry hid his superhero identity from Iris, but she knew he was The Flash due to him speaking in his sleep during their honeymoon.

Barry feared that the accident had made him less human, and that he wouldn't be able to have children with Iris. After performing many tests on himself, it was determined that he could have children, and Barry revealed his identity to Iris. Despite this, Barry lost his wife from Professor Zoom at a masquerade party, and Barry chased him into the timestream and left him there. Later on, Zoom returned to kill Barry's new fiancé Fiona Webb, but the speedster killed the professor, and was charged with manslaughter.

Later on, Barry was brought to the 30th century where he found a reborn Iris, and the two had twins named Don and Dawn Allen. Barry made a stop in time to help Wally fight against Zoom, and since there were two of them, he sent his Zoom through the timestream. Afterward, Barry returned to the 30th century, and decided to retire from his life as a superhero.

Barry was brought out of retirement during The Crisis on Infinite Earths, as the 30th century was beginning to fall apart and reality starting to become fractured. Barry returned to the 20th century to warn his allies, but he was pulled into the Antimatter Universe by the Anti-Monitor, and he was mentally tortured by Psycho-Pirate. The Flash was able to use the Psycho-Pirate to turn all of Anti-Monitor's servants against him, and was able to destroy the Anti-Monitor's anti-matter cannon. However, as a result of doing so, Barry entered the Speed Force forever due to running beyond his speed.

There are several different accounts on what happened after Barry's death, as one showed him transforming into electricity as he went back in time, and struck his past self, explaining how he got his powers. In the Terminal Velocity storyline, it introduced the concept of the Speed Force, portraying the force as the Valhalla for speedsters. Barry was shown joining the ranks of legendary speedsters, and became the lighting bolt that struck him in the chemical accident. In the Marvel Universe, there was a character who had amnesia, who remembered that name was something like Buried Alien, and he adopted the alias Fastfoward.

Oliver Queen later met Barry when he visited an aspect of Heaven, and the speedster gave him advice on the afterlife. Thessaly also encountered him at the Dead Legends Café, and is portrayed as a amnesiac who doesn't remember his own name, but holds some of his heroic characteristics. During the Infinite Crisis, Barry aided his grandson, Bart Allen in dealing with Superboy-Prime, alongside Johnny Quick and Max Mercury.

Barry returned in Final Crisis, as he is seen chasing the bullet that killed Orion through time, and was being chased by the Black Racer. While running through time, he meets Wally West and Jay Garrick, telling them to run before accelerating one month into the future with Wally. The two found the world conquered by Darkseid, and discovered that Wonder Woman, Batwoman, Catwoman and Giganta have been corrupted by the Anti-Life. After breaking Iris free from the Anti-Life Equation's hold, Barry and Wally met with Jay, and Barry explained his plan to lead the Black Racer to Darkseid and let his soul claim him.

Barry and Wally managed to lead Black Racer to Darkseid's base, and the two managed to have the Black Racer remove Darkseid's essence from Dan Turpin by using his own Omega Beams against him. Afterward, though his family and friends were happy that he was back, Barry was uneasy, being unable to explain how he escaped the Speed Force. Barry met with Hal Jordan, and told him to inform the others that he wasn't going to the parties celebrating his return. Going on patrol, a rogue speedster named Savitar escaped the Speed Force through Barry, but disintegrated when Barry managed to catch him. 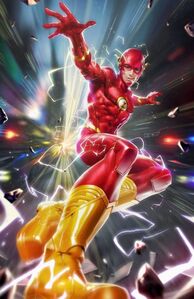 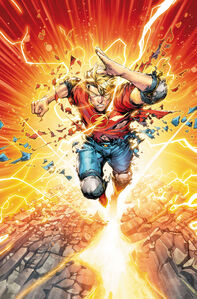 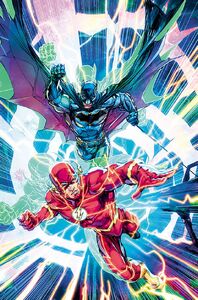 The Flash and Batman. 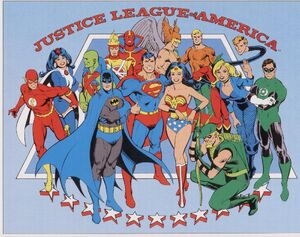 The Flash with the Justice League. 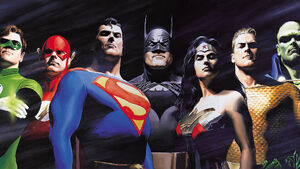 The Flash with the other founding members of the Justice League - Superman, Batman, Wonder Woman, Green Lantern, Aquaman and Martian Manhunter. 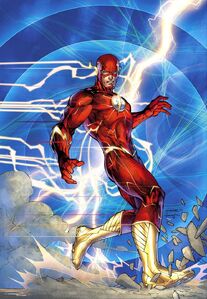 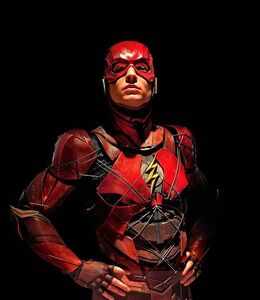 The Flash in the DC Extended Universe. 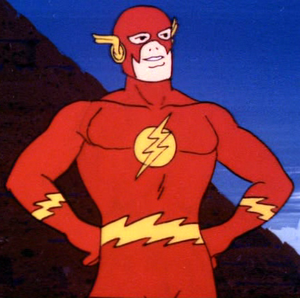 The Flash in Super Friends. 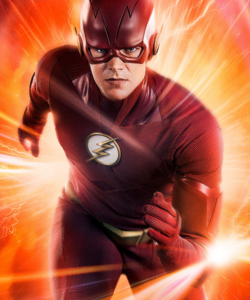 The Flash in the CW's Arrowverse. 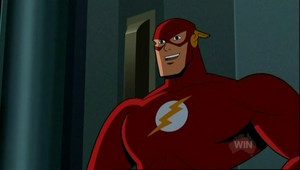 Flash in Batman: The Brave and the Bold. 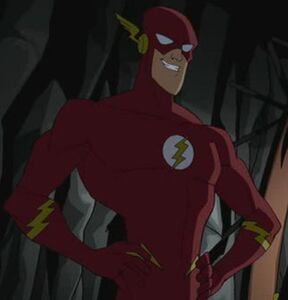 The Flash in The Batman. 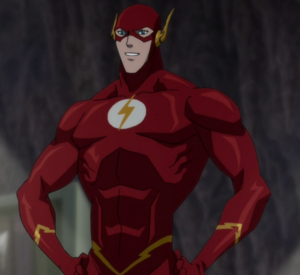 The Flash in the DC Animated Film Universe.

The Flash in Family Guy. 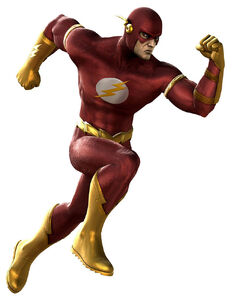 The Flash in Mortal Kombat vs. DC Universe. 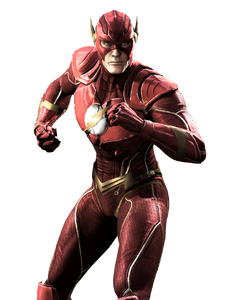 The Flash in Injustice: Gods Among Us. 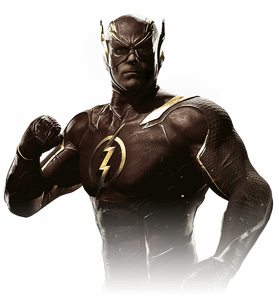 The Flash in Injustice 2. 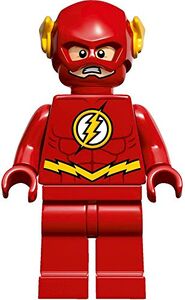 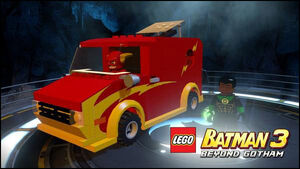 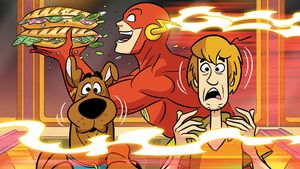 Flash taking Shaggy and Scooby's snack.
Add a photo to this gallery

Retrieved from "https://hero.fandom.com/wiki/The_Flash_(Barry_Allen)?oldid=1938941"
Community content is available under CC-BY-SA unless otherwise noted.