Find the man who killed his mother

Defeat Professor Zoom
Save the earth from evil threats and supervillains

He's voiced by Justin Chambers and Christopher Gorham, as a youth by Grey DeLisle.

Barry Allen was a young man raised by his mother Nora, who became an orphan when his mother was murdered at his home on her birthday. Years later, even after becoming the superhero known as the Flash, Barry still mourned for the death of his mother and wished that he could change things so that his mother would still be alive.

In the present day of the original timeline, Barry dealt with Eobard Thawne, the Reverse Flash, and the members of his Rogues Gallery as they infiltrated the Flash Museum to cause trouble and for the Reverse Flash to set up bombs that would destroy the Flash along with the Museum. Superman, Batman, Green Lantern, Wonder Woman, Aquaman, Captain Atom, and Cyborg showed up to help destroy the bombs before they detonated and to bring the criminals to justice. After the Reverse Flash and the Rogues Gallery members were apprehended, Barry ran off to do something.

The following day, Barry woke up in front of his computer in the police station to find out things have changed, that a superpowered being known as Citizen Cold is on the loose. As Barry tried to run off to deal with it as the Flash, he realized that he neither had his Flash ring on hand nor his superspeed powers, and thus fell down a flight of stairs. He soon found out that his mother Nora was still alive and was waiting for him to take her out for dinner on her birthday. His next revelation was that his wife Iris West was now married to someone else and had a daughter through her husband.

Realizing that he must be in a different timeline, Barry went to Gotham City to seek out Bruce Wayne as the Batman. Instead, he encountered Thomas Wayne, Bruce's father, who in this new timeline lost his son Bruce to a murderer and his wife Martha to insanity, and thus became the superhero known as Batman. When trying to explain what he was doing in the Batcave, Barry had the Flash ring drop out of his pocket when Thomas pushed Barry around. Barry opened the ring, hoping to prove to Thomas the truth of his claim that he was the Flash and came from a different timeline, and instead got the costume of the Reverse Flash coming out.

Though Thomas had difficulty believing Barry, he nonetheless helped in trying to restore Barry's superspeed powers by recreating the same accident with lightning and chemicals that gave him the powers in the first place. Unfortunately, in the first attempt to do so, Barry suffered third-degree burns and had to be treated for them by Thomas, who managed to save Barry before he burned to death. During his recovery, Barry saw memories of events that have happened in the new timeline and realizes that he is beginning to lose the memories of the original timeline. Thomas and Barry attempted again to restore Barry's superspeed powers by recreating the same experiment, and this time was successful as Barry managed to save Thomas from being impaled on top of the fence surrounding Wayne Manor as he fell.

With his superspeed powers restored, Barry changed the Reverse Flash costume into a Flash costume and attempted to break the time barrier in the hope of restoring the original timeline, but found out that he couldn't because someone else in that timeline was somehow co-opting the Speed Force that gave Barry his superspeed powers. The Flash discovered through the photos taken by Lois Lane in New Themyscira that the Reverse Flash was in this timeline as well, and so gained the help of Thomas Wayne, Cyborg, and the S.H.A.Z.A.M. kids to infiltrate New Themyscira to stop the war between Aquaman's Atlantean forces and Wonder Woman's Amazonian forces at least long enough to draw out the Reverse Flash.

When the Reverse Flash finally showed up, Eobard revealed to Barry that it was Barry, not Eobard, who was responsible for creating the new timeline by going back into time to change one event: to save Barry's mother. In Barry's use of his superspeed powers to break the time barrier, Eobard said, he created a "time boom" which altered other events not even directly related to the murder of Barry's mother to change everything and create this new timeline. As the Reverse Flash continued to pummel Barry into submission, Eobard waited for the destructive wave of Aquaman's quantum energy weapon to destroy everything, telling Barry that as long as he is in the same timeline, Barry wouldn't have enough Speed Force energy to break the time barrier again. But after the Reverse Flash was shot in the head by Thomas Wayne, the elder hero gave Barry a letter to give to his son in the other timeline before dying. Then Barry ran and broke through the time barrier, accosting his earlier self before he tried to save his mother from her murderer.

Barry again woke up in front of his computer in the police officer and then realized that everything was changed back to the way it originally was, with some minor changes. After visiting his mother's grave with his wife Iris, Barry went to visit Bruce Wayne to deliver the message Thomas wrote to his son before he ran off.

After discovering a Parademon attempting to plant a Mother Box in Central City, he subdued it, and brought both the creature and device to S.T.A.R. Labs for study. A few days later, while coming back from a burrito run for the CCPD forensic department, Barry called Dr. Silas Stone to see whether or not they had found out anymore about the creature and device. When S.T.A.R. Labs was attacked by an army of Parademons, Dr. Stone and his team were in the Red Room attempting to save Silas's son life, Barry called just as the Parademons began to break into the room. He was told by Dr. Stone that they were in trouble, and rushed down to S.T.A.R. Labs as the Flash to assist them.

After defeating several Parademons with ease, and being saved by Silas' son Victor, who had been turned into a cyborg after an accident with a Mother Box, he left for downtown. Flash then helped Victor fight off the attacking Parademons. He then left to give the father and son some privacy. Later When Green Lantern and Batman were fighting more Parademons in Metropolis Flash came to their aid. After a friendly greeting with his old friend Green Lantern, Flash was awestruck at meeting Batman who was impressed by his work in Central City. Joined by Superman, Shazam, Wonder Woman and Cyborg the group watched as the Parademons leader Darkseid approached. Despite their efforts to fight him off Darkseid overpowered them and captured Superman. While Batman went to go rescue Superman the rest of the team came up with the plan to blind Darkseid.

Wonder Woman using her skills and agility was able to blind the first eye with her sword. As the team fought him they managed to restrain him allowing Flash to blind his second eye with a crowbar. However Darkseid was still not down. Cyborg decided that to truly defeat Darkseid they had to send him back through one of the mother boxes portals. After finally getting the Motherbox to activate the portal opened and together with help from a returning Batman and Superman; Flash and the others managed to push Darkseid back through the portal. Saving the Earth. Afterwards he reported to the rest of the heroes about Superman's capture. Barry later followed Green Lantern's plan, After Darkseid's defeat, Barry suggested to the rest of the group that they leave before the approaching civilians blamed them again, though he was surprised as they celebrated them instead. He later attended a ceremony honoring him and the rest of the heroes at Capitol Hill. Later when the team was being honored the president asked if they had a name only for Shazam to come up with the name Super Seven much to the others chargin.

The Reign of Superman

Flash was among the heroes who took part of the assault on Apokolips against Darkseid, however the mission went wrong, some Heroes were killed by Darkseid's Paradooms and others were captured. Flash was made a walking generator and ran endlessly to keep Apokolips moving. Two years later, the remaining heroes found him, rescue him, and when Constantine read his mind he discovered he cause the first flashpoint. After Darkseid was finally defeated and only thirty-one percent of the earth's molten core was taken, Constantine convince Barry to create another Flashpoint. Though Barry is reluctant at first. because he promised Iris to never do it again, but Constantine reason with him of the chances of fixing the timeline.

Accepting this, Barry ran back in time to restart the timeline to ensure it never falls into Darkseid's hands again, creating a new timeline. 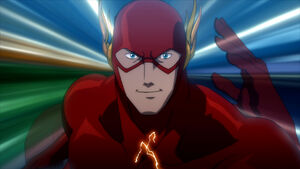 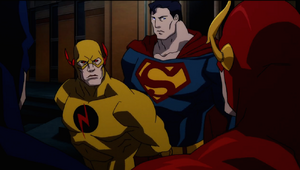 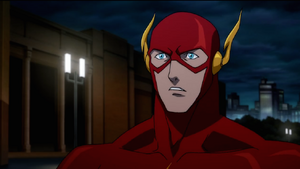 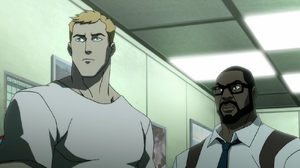 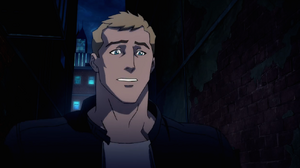 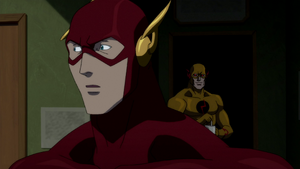 Thawne reveals himself to Barry 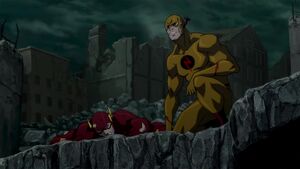 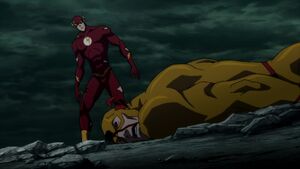 Barry was see Thawne is killed by Batman (Thomas Wayne)