NOTE: ONLY THE FLASH FROM THE REBOOT GOT REJECTED IN THE PG WIKI, THE ORIGINAL WASN'T PROPOSED.

The Flash has blond hair, blue eyes, and light skin. He wears a hoodie with a red and yellow color scheme and the signature Flash logo on the front as well as lightning bolt decoration around the sides.

He is voiced by Josh Keaton in the English version of the cartoon.

The Flash appears in the crowd by Amanda Waller. He is later shown getting outrun by Cheetah.

He is in the courtyard as Hal Jordan is thrown by Wonder Woman. He is later seen in the hallway with Doctor Light.

He is part of the super-suit design class.

He appears with Beast Boy and Hal Jordan complementing the girls' video.

The Flash is a representative of the Science Club and later appears at the meeting.

He watches Amanda Waller's announcement of Bumblebee as the Hero Of The Month. 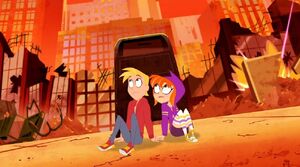 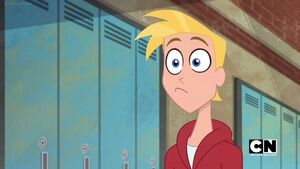