The Goth Kids are anti-heroes in South Park. Originally social set-pieces, they have been reused several times each time more fleshed-out. Pete can be distinguished by the red dye in his hair, Henrietta is the sole female goth and has identity issues with her mother, Firkle is the youngest member and Michael is the name of the cane carrying tallest member.

The Goth Kids first appeared in the episode Raisins. When Stan sank into a depression after being dumped by Wendy, he joined their gang. The Goth Kids spend all their time drinking coffee, writing depressing poetry, smoking and commenting on how everyone but themselves are "Britney and Justin conformist wannabes". Stan eventually gets sick of being miserable and leaves their gang, though they keep in touch, like the time Stan required one of them to be part of his dance troupe.

When the vampire craze hits South Park, the Goth Kids get frustrated with the fact that the vampire kids dress like them only much less melancholic. They briefly try dressing normally in the hopes of not being mistaken for them, but because none of them are considered particularly attractive, this image wasn't very flattering. They eventually stop the vampire craze by kidnapping the head vampire kid and destroying the fashion store that was supplying the other kids with goth-themed clothing and accessories, restoring their image.

The Goth Kids were part of a cult that worshiped Cthulhu. They were hoping that when Cthulhu ascended to Earth they would be able to bask in the chaos, but unfortunately Cartman got to Cthulhu and made him his sidekick. Disillusioned, they helped Kenny and the others find a way to defeat Cthulhu.'

Michael, is the oldest goth kid and vocalist in the Goth Kid's band. He occasionally walks with a cane, however he is seen walking without it, including giving it to Raven (Stan). He is taller than the others with curly black hair. His large nose is visible along with his ears, unlike most South Park kids. He is possibly half-Asian, half-Caucasian because in "Goth Kids 3: Dawn of the Posers", it is revealed that he has an Asian mother and Caucasian father. Although, this could be his stepmother because in the episode "Raisins", he states "Love didn't work out for my mom and dad, so why should it work out for me?", suggesting that his biological parents are divorced.

In "You Got F'd in the A", he helps Stan's dance team out in an effort to be the biggest non-conformist of all by not even conforming to goth standards. He also suggests bringing Yao into the group.

Michael appears in "The Ungroundable", being mistaken for a Vampire kid. The Goth Kids kidnap the head Vampire Kid and suggest ramming a stake through his heart, but end up sending him to Scottsdale, Arizona instead.

In "Goth Kids 3: Dawn of the Posers", Michael, Pete, and Firkle go to the CPS agency in an attempt to report Henrietta's parents' child abuse for sending her to a disciplinary camp that turned her "emo". Later in the episode, his parents end up sending him to the same camp to help "make him normal."

Pete is the second-oldest male goth kid and seems to be around the same age as Henrietta. He has teased hair that's shaved around the bottom half and is dyed red near the roots. He also has a long fringe, which he is constantly seen flipping out of the way when it gets in his eyes. Apparently this long fringe of hair, which touches his face, has caused him acne problems, resulting in apparent pockmarks as mentioned by another student in "The Ungroundable". He wears purple buckled winklepicker shoes and a silver bolo tie with a red center. When he speaks he has a very soft voice, even when yelling; implying that he does not speak often. He also plays the bass guitar in the Goth Kids' band. He shows a little concern over the position he and the other goth kids are in when they were about to kill Mysterion. Despite not wanting to kill anyone he ends up going along with the other goths after Michael said that killing is expected when you're a minion of Cthulhu.

Pete is shown to have some magical abilities, as he talks with the ghost of Edgar Allan Poe through his coffee in "Goth Kids 3: Dawn of the Posers". In the same episode, he is shown knowing how to drive a car, despite being 10 years old.

Henrietta Biggle is the female goth kid. She is overweight and has medium length, straight hair parted in the center. She is seen as a heavy smoker, much like the others, and uses a vintage cigarette holder. Her bedroom is another place where the Goths hang out where they read depressing poems about how much they hate conformists. The posters on her wall include parody band names, Skippy Puppy and Blauhaus, these are fictionalized versions of real life bands Skinny Puppy from Canada and Bauhaus from England.

She plays the keyboards in the goth kids' band. Their only known song was "Talent Shows are for Fags" played ironically at the elementary school talent show in the episode "Erection Day".

She can also drive as seen in "The Ungroundable" when they stole her mother's car. She was the first goth to have her name revealed. She hates her mother, often being over-dramatic and claiming she is abused even though all her mother is kind and generous, offering her and her friends cookies. (except once when she called Henrietta a "fatty").

It is revealed in "Coon vs. Coon & Friends" that Bradley Biggle is her brother, though not by blood, because as the story progresses we learn that he is actually an alien.

During the events of "Goth Kids 3: Dawn of the Posers", Henrietta's parents send her to a camp attempting to improve her attitude. When the camp turned her "emo", she wore her hair parted on the side and grew her bangs longer with a green headband and the ends of her hair dyed pink. She wore running black mascara, pink lipstick, and pink striped gloves.

Firkle is the youngest of the goths. He is referred to as a midget in "The Ungroundable," by an unknown student when wearing regular clothes. He has short black hair, with a long side-swept fringe, and is in kindergarten. He says that most people are "Nazi conformist cheerleaders", and that he is the biggest non-conformist there is.

He plays drums in the Goth Kids' band during the talent show in "Erection Day". In the episode "Mysterion Rises" he shows how hardcore he is by pulling out a switchblade and threatening to stab Mysterion.

In "Goth Kids 3: Dawn of the Posers", Firkle turned double agent and revealed he was in on the plot to turn people "emo" with plants. Though it was revealed that the plants were fake and he was shocked that he betrayed his friends for nothing. He was possibly rejoined in the group.

There is another Goth girl that can be seen with the group in short non-speaking cameos on two occasions. Once in "Goobacks" she is seen helping the other Goth kids pick up garbage during the "Work for a better future" song and again during the Season Nine intro sequence replacing Firkle. 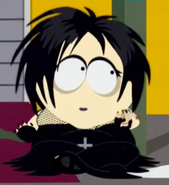 Retrieved from "https://hero.fandom.com/wiki/The_Goth_Kids_(South_Park)?oldid=2032224"
Community content is available under CC-BY-SA unless otherwise noted.