No information
The Great Gazoo is a character from The Flintstones animated series. He first appeared on the show on October 29, 1965. The Great Gazoo was voiced by Harvey Korman.

The Great Gazoo is a tiny, green, floating alien who was exiled to Earth from his home planet Zetox as punishment for having invented a doomsday machine, a weapon of immense destructive power. His invention was a button which if pressed would destroy the universe in an explosive "ZAM," though he insists he made it on a whim ("I wanted to be the first on my block to have one!") with no intent of using it. Gazoo was discovered by Fred and Barney when his flying saucer crashed; Gazoo recognizes Fred's and Barney's world as prehistoric Earth, implying Zetox banished him through time as well as space.

Gazoo refers to Fred and Barney as "dum-dums" and constantly causes problems for them. He can materialize and dematerialize objects, teleport, freeze time, travel through time, and perform other remarkable feats, but when he attempts to help out Fred and Barney, he usually ends up causing even more trouble. The only people who are able to see him are Fred, Barney, and the children, because they believe in him; animals also can see him. A running gag is that Fred argues with Gazoo while Wilma believes that he is talking to himself. When their daughter, Pebbles, says "Gazoo," Wilma thinks Pebbles is sneezing.

The story arc regarding Gazoo trying to return home is never resolved because of the cancellation of the original series, and the character does not appear, nor is he referred to, in the immediate series follow-up The Man Called Flintstone (1966) or any of the later spin-off TV series or animated movies, rendering him effectively dropped from continuity.

Gazoo's name actually derives from the 1909 hit song, "King of the Bungaloos," by Charles Straight and Gene Greene. In it the narrator explains, "I just received a cable 'spatch from my ancestral home. It tells me I'm the great Gazoo, successor to the throne."

Because Gazoo is introduced into the show midway through the final season and is considered by some to be an absurd character, he is often cited by fans and critics of the show as being an example of the show's having "jumped the shark."[2] In all, Gazoo appeared in 11 episodes.

Apart from the original TV series, he appears in a Fruity Pebbles cereal commercial as part of a promotion for a contest where consumers would have to try to find boxes of all-orange cereal pieces, and more recently has become the mascot for Marshmallow Mania Pebbles cereal. He is also a character in Flintstones vitamins, and is a central character in the video game The Flintstones: The Rescue of Dino & Hoppy. 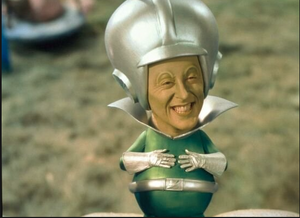 Fred summons The Great Grazoo to help Mystery Inc in the Scooby-Doo! Team Up comics.