How the Grinch Stole Christmas!

Put an end to Christmas in Whoville by stealing all of the Whos' presents, food, and decorations (formerly).

Terrorize Whoville and anyone who displeases him (succeeded; formerly).
Mess with the Cat in the Hat (formerly).

The Whos
Cindy Lou Who

The Grinch is the main protagonist of Dr. Seuss' How the Grinch Stole Christmas!.

In 1966, he was voiced by the late actor Boris Karloff. In 2000, he was portrayed by Jim Carrey as an adult while the late Josh Ryan Evans play as an 8-year-old Grinch.

In 2018, he was voiced by Benedict Cumberbatch.

The Grinch is depicted as a furry recluse living in seclusion on a cliff overlooking the cheerful, optimistic community of Whoville.

He scorns the Christmas season and the boisterous festivities customarily celebrated during the holiday; apparently irritated by the happiness of others and deriving pleasure from spoiling other people's merriment.

Aided by his long-suffering pet dog, Max, he disguises himself as Santa Claus and breaks into the Whos' homes to steal their holiday decorations and gifts.

Although his plan works, he is infuriated on Christmas morning to find the Whos singing cheerfully despite his actions. Convinced that the holiday must carry a meaning distinct from its decorations and gifts, the Grinch returns and distributes his stolen goods to the Whos, with whom he thereafter celebrates.

Nevertheless, the Grinch is still portrayed as a bitter and ill-tempered character in artwork or other media.

With the character's anti-holiday spirit followed by the transformation on Christmas morning, scholars have noted similarity to Ebenezer Scrooge from Charles Dickens' 1843 novella A Christmas Carol.

In both the animated TV special and the 2000 live-action film, he is shown to have superhuman strength when he stops an entire sleigh loaded with presents from going over a cliff and lifts it over his head, although he is also described as "[finding] the strength of ten Grinches plus two" during that moment of crisis.

Thus, his feat of strength may be akin to an adrenaline rush, as he does not appear to exhibit this ability under normal circumstances. 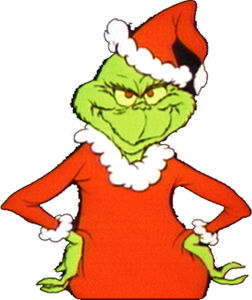 The Grinch, as seen in the animated TV special 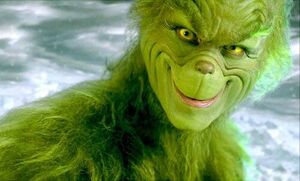 The Grinch, as seen in the live-action movie, played by Jim Carrey 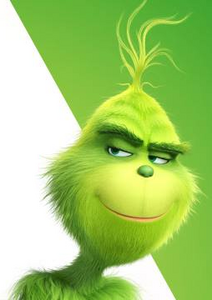