Honor his legacy as the Immortal Iron Fist.

Iron Fist (real name Daniel Thomas "Danny" Rand-K'ai), better known as The Immortal Iron Fist, is a fictional character, and a comic book superhero in the Marvel Comics Universe, and a practitioner of martial arts. Created by Roy Thomas and Gil Kane, he first appeared in Marvel Premiere #15 (May 1974). The character starred in his own solo series in the 1970s, and shared the title Power Man and Iron Fist for several years.

Danny is the son of Wendell and Heather Rand, who died during their journey to find the nexus of K'un-Lun, a dimension that Wendell was raised in before he returned to the states. Danny was raised by the denizens of K'un-Lun, and was trained in martial arts before gaining the title of Iron Fist after defeating Shou-Lao the Undying. Deciding to return to the states, Danny became a superhero and friend and partners to the vigilantes Luke Cage and Daredevil. He would become a member of the Heroes for Hire, the Defenders, the Secret Avengers, and the Midnight Sons. He is recognized for being a martial artist, and being capable of using superhuman energy to strike tremendous blows with the power of the "Iron Fist".

He was created by Roy Thomas, Gil Kane, and Bill Everett, and first appeared in Marvel Premiere # 15 in May of 1974.

Daniel trained within K-un-Lund for years and was eventually able to earn the title "The Immortal Iron Fist" from his mentors, the title came with an enhanced affinity to draw upon the life-force energy known as Ki which Daniel emanates from his fists as a potent weapon. As The Immortal Iron Fist, Daniel is bound to protect K-un-Lund at all costs, however since the city it-self is rarely in immdeiate danger and it's Monks are quite able to protect them selves Daniel spends his free time working as a Hero for Hire.

Daniel has been an active part of the Avengers and a fill-in for Daredevil but is most frequently seen as a Hero for Hire paired with his best friend Luke Cage aka the Power Man. Daniel and Luke sell their services to other heroes as back-up or to private citizens with just causes.

Daniel Thomas "Danny" Rand-K'ai is the son of Wendell Rand and Heather Duncan, and his father lived in K'un-Lun, another dimension realm who was adopted by its ruler, Lord Tuan. Though Danny was born to Heather, Wendell had a child with Shakirah, who was the love rival for Wendell's brother, Nu-An. Wendell managed to return to the United States, and his daughter, Miranda, would later learn that she had a brother named Danny.

When he was young, he went with his parents and their friend, Harold Meachum to search for the nexus to return to K'un-Lun. During the journey, Wendell was killed when Harold let him go off a broken bridge, and Heather died protecting her son from a pack of wolves. Danny was found by the denizens of K'un-Lun, and was apprenticed to Lei Kung by Nu-An, who had secretly plotted the deaths of his Rand's parents.

Danny was put through rigorous training, and around the age of sixteen, earned the title Crown of Fu-Hsi and defeated numerous fighters and a mechanical machine in K'un-Lun. When he was nineteen years old, Danny was given the chance to gain the power of the "Iron Fist", and was tasked with killing the Shou-Lao the Undying. During the battle, the serpent's scar imprinted itself on Rand's chest, and Danny managed to defeat Shou-Lao and gain the mystical power of the "Iron Fist" from getting the serpent's molten heart. With the power of the "Iron Fist", Danny could summon energy into his hands and strike tremendous blows to his opponents. When the nexus reopened, Danny declined to stay in K'un-Lun and returned to the United States to get revenge on Meachum for killing his father.

Danny found Harold when he returned to America, but took pity on him before Meachum was murdered by an unidentified ninja. Rand was accused of being the killer by Harold's daughter, Joy, and Danny went to clear his name by finding the killer. Around this time, he worked with a woman named Jade to the afterlife, where he reunited with his mother and learned that she was enslaved by Dhasha Khan. Wanting to free his mother from the sorcerer, Danny allowed the Bowman to kill him so he could become a spirit to fight Khan, and was restored by Jade. Afterward, Iron Fist befriended Professor Lee Wing and his daughter Colleen, and worked with Colleen's partner Misty Knight to rescue her from Master Khan. After battling Master Khan and Angar the Screamer, Danny learned the truth that his adoptive uncle was behind the death of his mother.

Becoming a crime-fighter, Danny made amends with Joy, as she and her brother Ward wanted to get revenge on him as they still believed he killed their father. Danny then claimed his inheritance at the Rand Corporation, and he became wealthy and allowed Joy to manage his business when he was stopping threats. Iron Fist befriended Luke Cage, a vigilante who's skin was invulnerable, and the two decided to create the Heroes for Hire. The two became the co-founders of the business, and would work as bodyguards and detectives through the firm for the public. When he returned to K'un-Lun, he was exposed to a disease that caused him to develop cancer, but he would cure himself while he was in stasis after being captured by the Super-Skrull. While in stasis, Danny used chi meditations to cure himself, and was freed by Doctor Strange, Namor the Sub-Mariner, and Misty.

When Onslaught started to slaughter heroes, Danny and Cage decided to expand the Heroes for Hire, expanding with Oracle Inc. with Namor. The duo worked with the classical hero Jim Hammond, an android that was original Human Torch during the twentieth century. The group would later disbanded when Namor saw a way to diffuse it with Oracle Inc., and Danny wanted to share the wisdom of the K'un-Lun to Earth. He decided to call K'un-Lun to Earth, but Junzo Muto led the Hand and took the power of the Iron Fist from Danny. Wanting to stop Muto, Danny worked with Wolverine and several heroes, and succeeded in preventing Junzo's plan from commencing. Despite defeating them, Danny didn't had his Iron Fist power, but re-gained them by Black Dragon who was resurrected by Nightshade. Iron Fist then worked with Black Panther to stop Black Dragon, who betrayed Nightshade and possessed the body of Everett Ross.

Danny then become an ally to Daredevil, and falsely took on the mantle to make the public believe that Matt Murdock wasn't the costumed vigilante. He then continued to pose as Daredevil when he sided with Captain America during the Civil War storyline, and even called Iron Man "Judas" for his supporting the Superhuman Registration Act. He was eventually captured and sentenced to the Negative Zone, but was freed to battle Iron Man and his team. After Captain America surrendered and was assassinated, Danny returned to the mantle of Iron Fist and joined the New Avengers alongside Cage.

Danny Rand defeated the dragon Shou-Lao in combat, thus branding himself with the dragon's mark on his chest. He then plunged his fists into the dragon's molten heart, absorbing its chi which he can wield for various purposes in his role as the immortal weapon, the Iron Fist. Each Iron Fist throughout history has utilized the chi of Shou-Lao in different ways. Danny Rand has learned new techniques and new depths to his abilities over time by learning from his predecessor, Orson Randall, as well as from reading the Book of the Iron Fist. 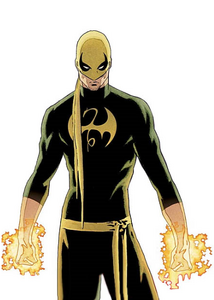 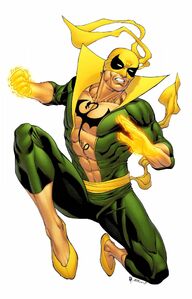 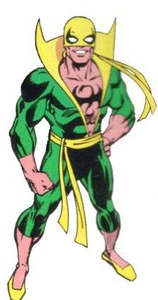 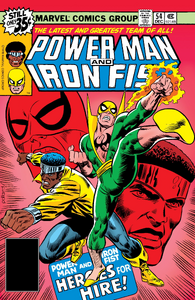 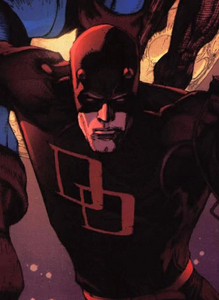 Danny Rand as Daredevil during the "Civil War" storyline. 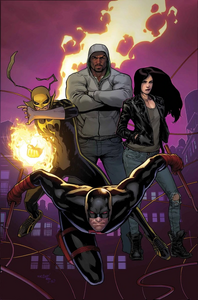 Iron Fist with the Manhattan Defenders. 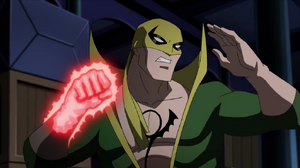 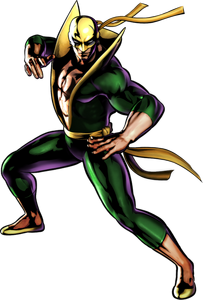 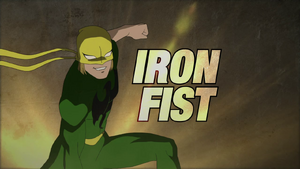 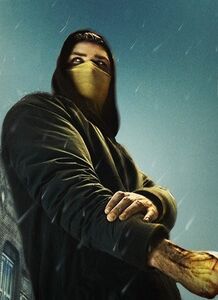 Finn Jones as Iron Fist in the Marvel Cinematic Universe. 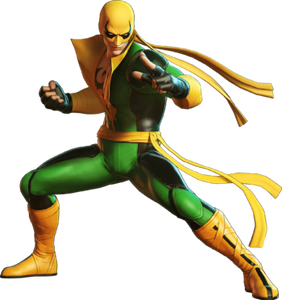 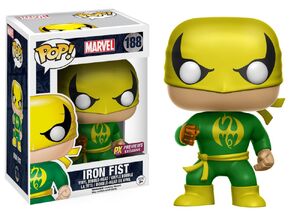