The Lair of The Lion Guard, Pride Rock, Pride Lands

Combat
The Leader/Fiercest: The Roar of The Elders
The Bravest: Bravery
The Strongest: Strength
The Fastest: Speed
The Keenest of Sight: Sight

They are a quintet who protect The Pride Lands and defend The Circle of Life. The group is traditionally led by the second-born child of the current King and Queen of the Pride Lands and have a power called The Roar of the Elders, which when used, causes the lions of the Pride Lands past to roar with them. However, the Roar can only be used for good. If it is used for evil, the user will permanently lose the Roar.

Each member has a marking on their left shoulder shaped like a lion's head known as The Mark of The Guard.

The group was first created by the good lions of the Pride Lands in order to stop a group of evil lions from taking over The Pride Lands. The leader and fiercest member of the newly created Lion Guard was called Askari, who went to the Tree of Life and discovered how to master a power called The Roar of the Elders (which when used, caused the lions of the Pride Lands past to roar with the user). Askari along with the other members of his guard (made up of the bravest, fastest, strongest and keenest of sight lions) defeated the evil lions. Askari's Lion Guard later formed a peace treaty between lions and elephants.

Since then every Lion Guard leader had the power to use the Roar.

A later Lion Guard (led by an unnamed lion) saved a young male cub who fell from a tree. Some years later, the unnamed lion's youngest nephew Askari (named after the original) became the new leader of The Lion Guard and commanded it during the earlier reign of his older brother Mufasa. However one day, Askari was bitten by a cobra which gave him a scar over this left eye and was mockingly given the nickname Scar by Mufasa. This mockery along with the effects of the venomous bite, made Scar turn against his brother and plot to overthrow him as King. When the members of his guard refused to help him overthrow Mufasa, Scar, in a fit of rage, used the Roar to destroy his guard. This action caused Scar to lose the ability to use the Roar as it was not meant to be used for evil.

The next Lion Guard was led by Kion, the son of Simba and Nala (the daughter of the cub saved by the Lion Guard led by Mufasa and Scar's uncle).

The current Lion Guard is led by Vitani (the sister of Kovu) after Kion's Lion Guard decided to become the protectors of the Tree of Life. This is the first time that The Lion Guard leader has been female and not the second-born child of the monarch.

Previous Lion Guards have had only lions in it, but Kion was the only lion in his Guard, as the other members are non-lions such as a honey badger (Bunga, the bravest), a cheetah (Fuli, the fastest & second-in-command), a hippopotamus (Beshte, the strongest), an egret (Ono, formerly the keenest of sight turned the smartest) and an eagle (Anga, the new keenest of sight). Previous Lion Guards prior to Kion's featured only male lions. Vitani's Lion Guard is made up of lionesses Shabaha (the bravest), Kasi (the fastest), Imara (the strongest) and Tazama (the keenest of sight). 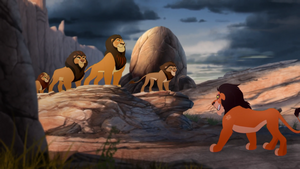 Scar and his Lion Guard 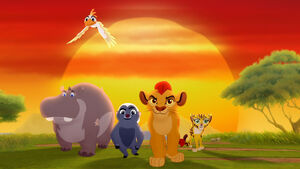 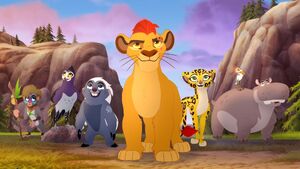 Kion's Lion Guard (along with new member Anga) as they appear in Season 3 of The Lion Guard along with Makini. 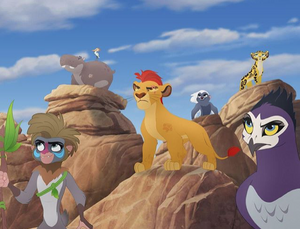 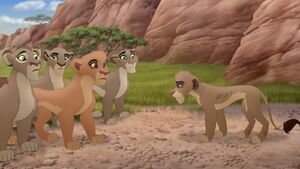 Vitani and her Lion Guard 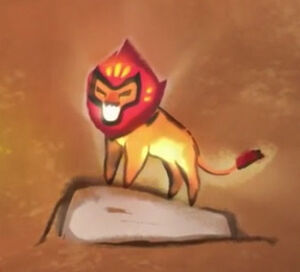 Painting of Askari, the leader and fiercest member of the first Lion Guard 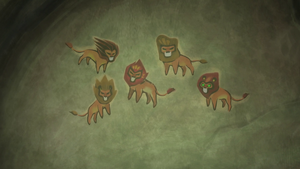 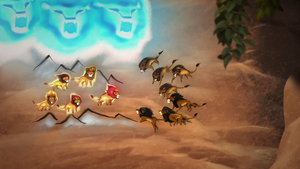 Painting of Askari's Lion Guard taking on a group of evil lions. 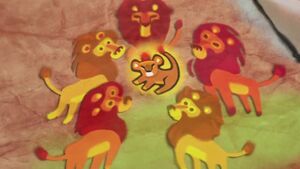 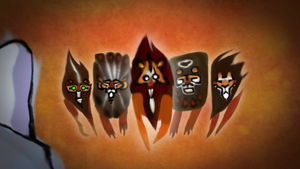 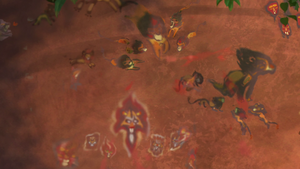 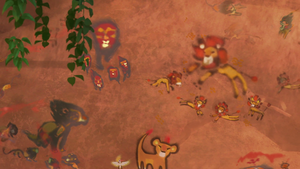 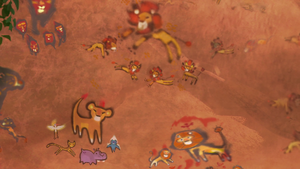 Paintings of Kion's Lion Guard and previous ones. 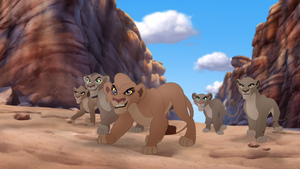 Vitani and her lioness guard