Being with the prince

The prince, her sisters

Mermaid
Tragic Heroine
The Little Mermaid is the nameless main protagonist of the 1837 fairy tale of the same name by Hans Christian Andersen. She was a youngmermaid who was willing to give up her life in the sea and her identity as a mermaid to gain a human soul.

The Little Mermaid was the youngest daughter of the Mer-King, her widowed father. She lived in the palace under the sea with the rest of her family and has a special singing ability. In the age of 15, a mermaid can go up to the surface. The Little Mermaid, being the youngest daughter, had to wait few years until the day when she would be allowed to go up to the surface.

Then, the now-mute Little Mermaid went up to the surface and drank the potion. As a result, she felt a sharp pain and she soon fainted. When she woke up, she found the prince bending forward above her and found out that her tail was transformed into human legs. The prince asked her who she is, but she could not answer him as she was mute. The prince, feeling pity for the Little Mermaid, took her to his palace anyways.

However, when the Little Mermaid entered the prince's room and found him lying with his new bride, she could not kill the prince she loved. So she decided to throw herself and the knife into the sea at dawn and become a sea foam. At dawn, the Little Mermaid threw herself and the knife into the sea and she was about to become a sea foam. Her body dissolves into foam, but instead of ceasing to exist, she felt the warm sun and discovered that she has turned into a luminous and ethereal earthbound spirit, a daughter of the air. As she ascends into the atmosphere, she is greeted by other daughters of the air who tell her she has become like them because she strove with all her heart to obtain an immortal soul. Because of her selflessness, she is given the chance to earn her own soul by doing good deeds to mankind for 300 years and will one day rise up into the Kingdom of God. 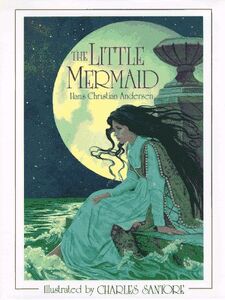 The Little Mermaid, as she appears in the novel of the same name 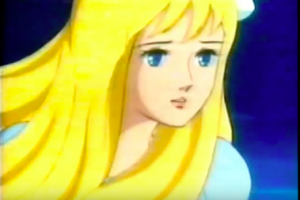 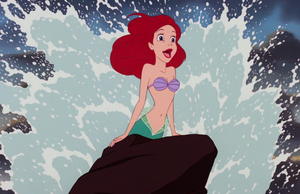 Retrieved from "https://hero.fandom.com/wiki/The_Little_Mermaid?oldid=1802791"
Community content is available under CC-BY-SA unless otherwise noted.