Guardian of the Truffula forest

Protect the truffula forest with his life (failed).

The Lorax is the titular main antagonist of the Dr. Seuss book and TV special of the same name, and the titular tritagonist of the 2012 Illumination film adaptation. He is the caretaker of the Truffula Tree Forest and intends to protect the forest.

He was voiced by the late Bob Holt in the TV special and by Danny DeVito (who also played Max Medici) in the film.

The Lorax makes his speech in the beginning of the film describing Thneedville as a city that is all plastic and fake, without any living tree.

After the Once-Ler chops down a Truffula tree to knit the first Thneed, the Lorax appears out of the stump of that tree. Almost immediately, he expresses his concern for the Once-Ler's actions. Then, he tells him he is crazy with greed. But, the Once-Ler takes no notice of him, and soon starts expanding his factory. After a week, the Lorax shows up again, informing him that thanks to his chopping, the Brown Barbaloots are starving and are leaving the area to find food. When the Once-Ler is fixing some pipes sometime later, he reappears to tell him that thanks to his factory smog, the Swomee-Swans can't sing, and are leaving to escape the smog. He also lectures the Once-Ler on Gluppity Glup and Schloppity Schlopp, which is being dumped into the pond where the Humming-Fish hummed, so they are leaving to find water that isn't so smeary. The Once-Ler finally loses his temper with him, and informs him he intends on still biggering his factory and production, right as the last Truffula Tree is chopped down. After the factory closes, the Lorax takes his leave of the Once-Ler by heisting himself by the seat of his pants through a hole in the smog, without leaving a trace. He leaves nothing behind, except for a small pile of rocks marked with the word Unless.

The Once-Ler learns the lesson of the word, "Unless someone like you cares a whole awful lot, nothings going to get better, it's not." He attempts to make amends by giving a Ted Wiggins of the tale the last Truffula seed, with the advice to "Plant a new Truffula, treat it with care, give it clean water, and feed it fresh air. Grow a forest, protect it from axes that hack. Then the Lorax and his friends may come back." 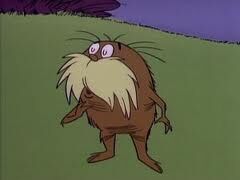 The Lorax from the classic 1972 TV special.

The 2012 Illumination film version of The Lorax 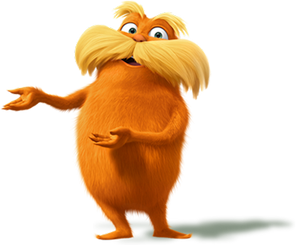 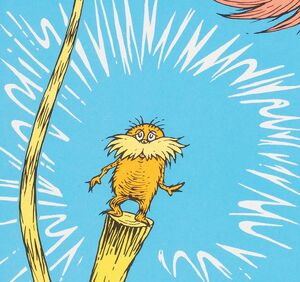 The Lorax as shown in the original book.