The Mandalorian is a reputed bounty hunter operating at the time of the New Republic some years after the fall of the Galactic Empire. He made a name for himself as a member of the Bounty Hunters' Guild, collecting bounties as he traveled across the galaxy's Outer Rim Territories, far from the authority of the New Republic, in his personal starship, the Razor Crest. During one of his missions on planet Arvala-7, he met a mysterious Force-sensitive infant of the same species as Yoda named Grogu who happened to be his target with whom he formed a close bond and sought to protect at all costs, putting him in conflict with other bounty hunters as well as with a former member of the empire who had originally hired him.

He is portrayed by Pedro Pascal, who also portrayed Oberyn Martell. Pascal also portrays Jack Daniels / Agent Whiskey in Kingsman: The Golden Circle, Maxwell Lord in Wonder Woman 1984, Marcus Moreno in We Can Be Heroes, and Joel Miller in HBO's The Last of Us tv series.

Din Djarin was a loner of questionable although polite character, as well as a bit sarcastic. His past and identity were wrapped in mystery, and he remained battle-worn and laconic as a formidable bounty hunter. Despite his callous and ruthless tendencies, remaining strung-up and mostly quiet while on the job, he could be somewhat talkative around people he was at least comfortable with, even showing that he could be caring.

Perhaps the most defining trait for The Mandalorian was his bond with the foundling, Grogu. He refused to kill the infant and instead destroyed IG-11, the assassin droid who had been hired only for the purpose to kill the Child rather than capture it. Initially, he went searching for a place where the small alien could grow up happily. Upon being reminded of a code stating that he had to be responsible for the child's welfare far more than just the child's protection, he eventually decided to either search for the child's kind to bring back to, or raise the child himself. Over time, his bond with Grogu grew stronger and he felt hesitant to part ways with him, even with the prospect of having a Jedi take him in and train him. When the time finally came to say goodbye, Djarin showed his vulnerable side by removing his helmet and showing his face to him for the first time, telling him to not be afraid and that they will reunite with each other one day. He was seen in tears as Luke Skywalker took him away, showing just how much he grew fond of the Child.

Being mostly a pragmatic person, he was willing to work with former rivals and enemies, even imperials, which he had a clear disdain for, if the job at hand dictated it, or that it helped with the completion of his objectives.

He was close with his tribe, and had a special interest in the foundlings of the tribe, as he had been one, and so ensured they received any of his excess beskar. He took the creed of his tribe to heart, following its traditions and ways to the letter even when there was no one to catch him breaking any, most notably his utter refusal of taking off his helmet in front of others regardless of the situation; he would have sooner died than to have other living beings take off his helmet for whatever reasons. In one case, that prompted IG-11 to assert that he was not a 'living thing' for being a droid, in order to take off his helmet just to heal Din's head injury. He had a notable dislike and distrust of droids, going so far as to make clear of his 'no droids' policy to the various people he ran into. However, his outlook seemed to have changed after IG-11 saved his life and his party again, coming to trust it as one of his own, and even visibly saddened when IG-11 chose to sacrifice himself for their safety.

The lone and laconic Din Djarin is better known as The Mandalorian, and for good reason. A mysterious and callous adversary strikes fear in their targets, and rightfully so, as people fear what they don't know, and all that is known about Din Djarin is that he is a cold and ruthless adversary and bounty hunter who's one of the best in the Guild. Greef Karga once stated that The Mandalorian was the best and most expensive mercenary in the parsec. As a mysterious lone gunfighter with questionable moral character and a strong-silent demeanor, he has much experience in killing.

The Mandalorian wears a set of Mandalorian armor made of the durable material Beskar, equipped with pauldrons and gauntlets, and donning a cape. More notably, the vambraces of his armor are in fact flamethrowers. He used many dangerous guns that he is very proficient at using, including an Amban sniper rifle and a blaster pistol. When surrounded by enemies and outnumbered, The Mandalorian uses lethal weapons called whistling birds, small guided explosive munitions that whistle, spin in the air, and hit the target near them and damage them with a small explosion. He most notably used this to simultaneously kill 4 stormtroopers. These are also attached to his vambraces. As well as flamethrowers and whistling birds, the vambraces have standard Mandalorian whipcord launchers. The Mandalorian is able to get creative with the whipcord launcher. While the first idea that comes to mind is using it to ensnare opponents, he can also use it to hang people, and cut someone in half traveling at a high enough speed. Of course, he can also use it to grapple onto something, and use it to scale the environment when not using his jetpack.

The veracity of the beskar armor has been confirmed to be durable enough to withstand blaster shots. In "Chapter 11: The Heiress", he tanks multiple shots to the chest from Stormtroopers. Paired with his deadly proficiency in using weapons, even a league of bounty hunters is an even match for him. When the Mandalorian was betrayed by Ranzar Malk's crew and locked in the cell, he escaped and delivered karma to them.

The Mandalorian's helmet is capable of tracking heat signatures and long range audio.

He also possesses in his large arsenal a flash charge, which is effectively a flashbang or flare used to blind targets with a blinding light. A notable accessory the Mandalorian possesses is his jetpack, which obviously allows him to fly. Less obviously, the jetpack can be remote controlled. The most notable accessories he has however, are his guns. The Mandalorian has shown meritorious skills with his guns, which include his personal blaster pistol and Amban sniper rifle. This gives him firepower at close range, mid range, and far range. The Amban sniper rifle can electrocute enemies with its tip, or completely disintegrate them. His helmet likely allows him to even snipe targets at night. The bandoliers strapped to his armor contain the ammo for these weapons. Hidden in his right boot is a vibro-blade. He used this weapon to get the finishing blow on the Mudhorn. Since then, he obtained a much better cold weapon-- a spear made of pure Beskar. It was gifted to him by Ahsoka Tano after their raid on the Calodan government in Chapter 13 resulted in Ahsoka defeating Morgan Elsbeth. After defeating Moff Gideon in combat in Chapter 16, he acquired the Darksaber, a legendary lightsaber deeply rooted in Mandalorian history. His new ownership of the saber essentially made Djarin the ruler of Mandalore.

The Mandalorian has proven to be a very skilled pilot, outmaneuvering New Republic pilots in his ship, the Razor Crest. He likely keeps many tools and weapons stashed on the ship. While on the ground, the Mandalorian is a capable fighter, but either due to the weight of his armor or lack of emphasis on physical combat, not the greatest. Also, at one point the Mandalorian used a blaster cannon turret based on the M61 Vulcan-- its real name has not been confirmed. However, the Razor Crest was destroyed by Moff Gideon along with most of the equipment inside the ship. 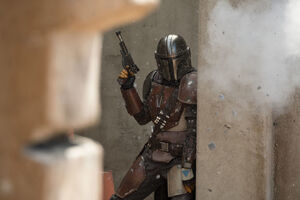 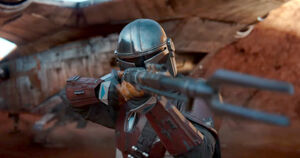 The Mandalorian burns a stormtrooper alive 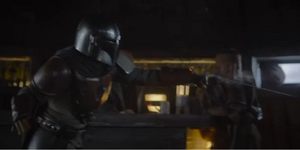 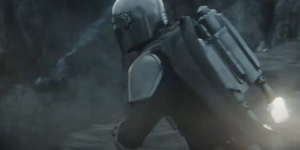 The Mandalorian using a jetpack in the Season 2 trailer

The Mandalorian using the jetpack to climp on a TIE fighter 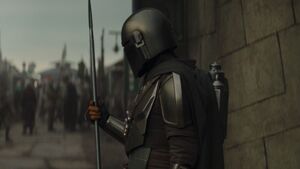 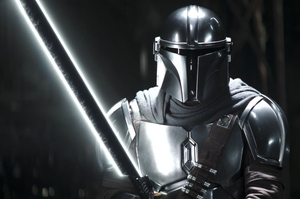 The Razor Crest was a gunship owned by Din Djarin, previously in the hands of the Galactic Empire, now destroyed. The interior of the ship had room for one pilot and at least 4 passengers, and had plenty of room for storage. On its outside, it had two visible engines, and two weapons that were laser cannons. The Razor Crest was a powerful starfighter, capable of entering hyperspace by traveling at light speed. In the cargo hold, he has a bathroom and a storage cabinet, in which a hammock is used to hold the Child comfortably. In Season 2 the Razor Crest was heavily damaged, repaired by Mon Calamari (they actually ruined it), further repaired by Pel Motto before being restored, and then destroyed by Moff Gideon's fleet in "Chapter 14: The Tragedy".

Following the destruction of the Razor Crest, Djarin reached out to Pel Motto to inquire about a replacement for his destroyed vessel. Motto was able to secure an old Naboo N-1 fighter that Naboo's royal forces had once used. At first Djarin was unimpressed, but agreed to help get the ship operational again. The astromech socket was removed as Motto thought Djarin would not want to use a droid on his ship.

Once the N-1 had been rebuilt, Djarin took it on a test flight through Beggar's Canyon before taking the ship up into orbit. He managed to run afoul of two New Republic X-wings on patrol over Tatooine by buzzing a commercial liner but was able to use a turbo booster to get away from them. Realizing who the N-1's pilot was, Captain Teva of the New Republic decided to let Djarin off with a warning and asked his partner Lt. Reed if he really wanted to go back to base and fill out paperwork all day when Reed suggested reporting Djarin to the New Republic. Soon afterwards, Djarin landed in the hanger, thoroughly impressed with his new possession.