Heroes Wiki
Register
Don't have an account?
Sign In
Advertisement
in: Powerpuff Girls Heroes, Cartoon Heroes, On & Off,
and 26 more

The Mayor of Townsville

The Mayor of Townsville, a.k.a. Mayor, is a major character of The Powerpuff Girls franchise. His main role in the show is calling the Powerpuff Girls if trouble wreaks havoc over the town, but this is not always the case as he sometimes has a bad habit of asking them to help him with some trivial problem, such as opening a normal jar of pickles.

He is voiced by Tom Kenny, who is the best known for voicing SpongeBob Squarepants, Ice King and Heffer Wolfe. In the Japanese dub from the series, he was voiced by Akihiko Ishizum.

The Mayor of Townsville is referred throughout only as "Mayor" (even campaigning with the slogan "vote for Mayor for Mayor"), although he is referred to as "Honey" by his wife in the episode "Boogie Frights."

He is short and old with a fringe of white hair around a bald scalp, a thick mustache and a scatterbrained-sounding voice. He wears a monocle and a small, black top hat that floats just above his head.

He also wears a violet blazer-coat, white turtleneck undershirt, a blue sash which has written 'Mayor' on the front, yellow vest, orange striped trousers, a red bow tie, with black and white boots.

In "Tough Love," and many other episodes, it is shown that he's very fond of pickles, and his little hat. He also seems to be fond of bananas.

He is almost completely stupid, and without the Powerpuff Girls to guide him, Townsville would have been destroyed long ago.

The Mayor is married to a woman who looks very much like him, although apparently their marriage is a rather lame one and he rarely mentions her. He appears to dislike his wife pretty much.

In the episode "Powerpuff Bluff," he is willing to trade his wife in exchange for a "priceless, very rare, one-of-a-kind" porcelain poodle.

He has more than one telephone, in fact, has many, several telephones. In Geshundfight, he had lots of telephones because he heard all his Congressmen telling him that they will have to absent for a supposed meeting in the Conference Hall because they were sick.

Also, in Down 'n' Dirty, he had lots of complaints that he must do something about an awful smell, later revealed to actually be Buttercup's filthy body, and he said "Do you think I'm blind?" to the people when they kept telling him to smell it.

It is not known how the telephone that he uses to call the Powerpuff Girls was invented, as it was not by A. Graham Bell. The phone has a red-handle, invisible pushing buttons, a calling light-bulb like nose, and some eyes, with a smile.

The phone could have a mind of its own because in one episode, it changed it's expression from happy to scared.

It was attached to his office desk after the Girls had defeated Mojo's giant scheme, which became the Powerpuff Girl occupation. Fuzzy Lumpkins had replaced it with a can-like string phone in the episode Impeach Fuzz.

His body was switched with Bubbles' body in Criss Cross Crisis, but his voice still remained.

In The Powerpuff Girls Movie, he had a minor role, and his first words most likely to be obnoxiously heard towards the main audience was "Oh boy," and did not actually know the Girls were creating mass destruction, because he had to get a pickle and then go back to his work.

The Mayor survived the subsequent coup by Mojo's minions, and apologized for accusing the Powerpuff Girls as criminals and putting Professor Utonium in jail after he did not let Professor explain enough to him.

According to the Mayor, he saw Mojo Jojo become a giant monster and fighting the Powerpuff Girls climbing a giant skyscraper and is convinced that they would be great heroes.

In Demashita! Powerpuff Girls Z, the Mayor of Townsville is now the Mayor of Tokyo City (New Townsville in the English dub). His design is distinctly different from his American counterpart, as he is of normal height and has no monocle or top hat.

While less extreme in comparison to the Mayor of Townsville, the Mayor of New Townsville is very childish and has a very short attention span. He seems to worry quite a lot when the girls are fighting, and wishes that they could cause a little less damage.

The Mayor, like many of the characters in the anime, loves sweets. Like in the episode "Something's a Ms" he has a crush on Miss Bellum as revealed in the final episode and relies on her a lot even admitting he can't do anything without her, unlike his counterpart.

The Mayor also has a younger brother, who is the Principal of the school that Momoko, Miyako, and Kaoru attend.

It was through him that Miss Bellum and the Mayor were able rearrange the classes, so that the girls would be in the same class. However, the Mayor and the Principal, don't always get along and even the most minor of things will set off an argument between them, which often leads to name calling.

He also deals with his brother when the girls aren't doing well in class due to them skipping class to save the city. 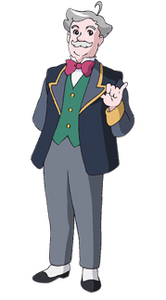 The Mayor in Powerpuff Girls Z 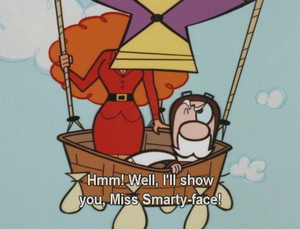 Miss Bellum and The Mayor at the Hot Air Balloon 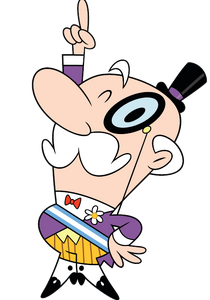 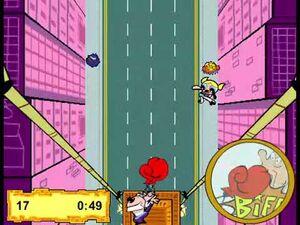