Get Olimar and Louie to save Hocotate Freight.

Enrich Hocotate Freight by collecting all treasures on PNF-404.
Free Louie from the Titan Dweevil. (all succeeded)

Leader
President Shacho, also known as The President, is the Hocotate Freight's president and one of the main protagonists in the 2004 video game Pikmin 2 and mentioned in it's sequel Pikmin 3. According to the official website for Pikmin 2, his favourite Pikmin are the purple ones. He is Olimar and Louie's boss.

After the events of Pikmin, the President greeted Olimar upon his return to Planet Hocotate before revealing that the Hocotate Freight delivery company was currently in heavy debt.

He informed Olimar that one day his co-worker Louie was delivering a large shipment of golden Pikpik Carrots when a "ravenous space bunny" suddenly appeared and gobble up every last vegetable. The President took an enormous loan to repay for the loss, but this left the company owing a substantial amount of Pikos that the President tried to pay off by selling the only asset Hocotate Freight could afford to give away: Olimar's ship, the S. S. Dolphin. Despite this however, the President told his employees that they still needed 10,000 Pikos to save the company from going under.

At that moment, Olimar drops a round metal object (a giant bottle cap) which is identified by a nearby company ship as valuable treasure worth 100 Pikos. The President was shocked by this as 100 Pikos was more than a years worth of salary and then orders both Olimar and Louie to retrieve more treasure from the round metal object's place of origin, the distant planet later known as PNF-404.

After the company debt is fully repaid, The President decides to join Olimar on a mission to rescue Louie, who was accidentally left stranded on PNF-404. They eventually find him at the bottom of Dream Den, but were forced to fight a Titan Dweevil in order to save the missing astronaut.

The President is mentioned in Olimar's Notes found scatter throughout the game. Apparently, Hocotate Freight has once again fallen into debt due to the President's constant spending. So Olimar and Louie were sent to collect more treasure on PNF-404. During Side Stories Mode on the Nintendo Switch version of the game, Pikmin 3 Deluxe, the President is furious at Olimar and Louie for abandoning their company ship on an alien planet after it was presumably damaged by a Quaggled Mireclops and told them not to return to Hocotate Freight until they have retrieved it.

The President appears in Super Smash Bros. Brawl as a collectable trophy.

Despite him being known for not putting his owrkers in the best working conditions, he generally seems to be on good tems with Louie and value him as an employee despite the latter's eccentric personality, to the point that when Louie was accidently left behind on PNF-404 after the 10,000 Pikos were collected and the debt was paid, he decided to go back there with Olimar to not only collect more treasure, but help find him. However, he can still be unreasonably demanding towards him and Olimar at times, most notably when he forced them to look for the company's ship on PNF-404 and told them he didn't want to see them again until they brought it back despite them having very good reason to leave it behind.

Generally speaking, he seems to be on pretty good terms with Olimar, and he values him just as much, if not more than Louie as an employee due to his competence and reliability. That said, his greed, the not-so-great working conditions he puts his employees in and hismorally dubious methods can exasperate Olimar, both for the problems he causes the company and the insensitive way he treats him, despite his generally good intentions. He can also still be unreasonably demanding towards him and Louie at times, most notably when he forced them to look for the company's ship on PNF-404 and told them he didn't want to see them again until they brought it back despite them having very good reason to leave it behind. 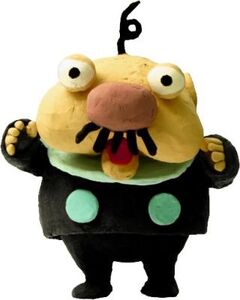