Good with guns and knives

Avenging his families death by killing the Saints (all succeeded).

The Punisher (Frank Castle jr) is an FBI agent, and former U.S. Army Delta Force operator turned vigilante, and is the titular main protagonist of the 2004 action film of the same name, and the independent fan film sequel: Punisher: Dirty Laundry.

He was portrayed by Thomas Jane, who also played Jonah Hex in DC Showcase: Jonah Hex.

Former Delta Force operative and FBI undercover agent Frank Castle had it all: a loving family, a great life and an upcoming desk job. On his final assignment, Castle plays his undercover role perfectly, but the operation spins out of control and a young man, Bobby Saint, is inadvertently killed. Unfortunately, Bobby is soon revealed to actually be one of the two sons of Howard Saint, a ruthless mob boss. Inflamed by the death of their son, Howard and Livia Saint prepare a wholesale mission of vengeance (they do not know that Bobby was not killed by Castle, but betrayed and gunned down by one of his own men).

Castle's worst nightmare is about to come true, as Howard Saint's lieutenants perform a massacre at the Castle family reunion; among the victims are Frank's wife, his son and his parents. Castle himself is shot multiple times by the killers, who then leave him for dead after rigging nearby fuel pumps and the dock to explode. Castle is blown off the dock by the shock wave, then is rescued and nursed back to health by a local witch doctor who was out to sea when the massacre took place.

Until this moment, he has spent his entire life adhering strictly to the law. However, even five months after his family's murder, Castle sees that the authorities have no intention of pursuing the men responsible, since Howard Saint has them in his pocket, thus making him and his entire gang above the law. Drawing upon all he has learned in 20 years, Castle sets in motion a diabolical plan to punish all of those responsible. In the process, Saint learns that Castle is alive, and sends Harry Heck and The Russian to kill him, however both are killed by Castle.

Howard Saint being shot and fatally wounded in the chest by Castle and killed in the explosion. The burning cars in the parking lot make a shape of the skull similar to the one in his T-shirt. Before Castle left he leaves a portion of Howard Saint's money for his neighbors. His revenge is taken, but now will continue his vigilante mission against others who deserve punishment, known only as The Punisher.

Frank wakes up in the back of his van, after dreaming about his son being killed. He collects some dirty clothes he wants to wash in a laundry, but he meets some street criminals who just arrived with two cars. One of them, the leader, takes a prostitute and starts beating her, then he takes her to a deserted alley and rapes her. Frank doesn't intervene and proceeds with his laundry. He doesn't react even when the thugs takes a passing boy and start beating him up. After a while, Castle comes out the laundry, and the gang leader tries to scare him with his gun, but he just walks to the shop on the other side of the road. In here, he briefly talks with the owner, a man on a wheelchair who got paralyzed after trying to defend a girl from the same gang; when the man starts complaining about how the whole world is going wrong, Frank buys a Jack Daniel's bottle and comes out of the shop, heading to the thugs, who are now threatening the boy with a knife.

Rapidly, Frank kills all the gang members using only his bottle and the knife one of them had. Then, he proceeds to take on the gang leader, breaking his right arm and both his legs. When the thug is helpless on the pavement, Frank starts pouring all the whiskey on him. When he's done, he lights a zippo, asks the thug if he knows the difference between justice and punishment, and walks away, leaving the zippo in front of him. Immediately after, the prostitute the criminal raped some minutes before shows up, takes the lighter and sets fire on him.

Just before leaving with his van and his clothes, Frank is stopped by the boy he saved, who tries to give him back a shirt he dropped. Castle tells him he can keep it if he wants, since it has a hole in it. While he goes away, the boy reveals the trademark Punisher shirt. 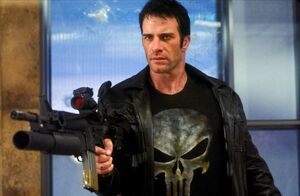 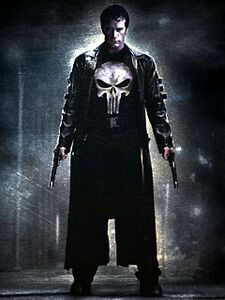 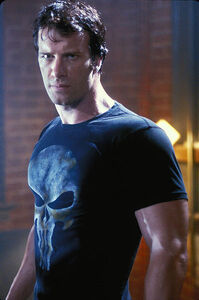 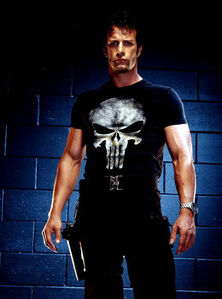 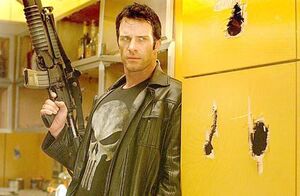 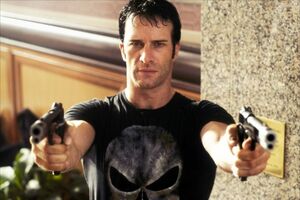 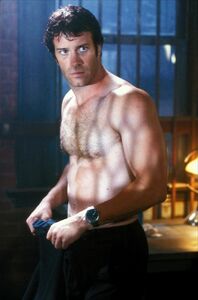 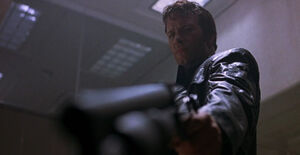 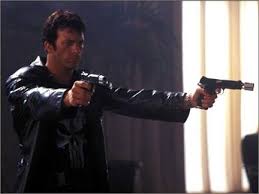 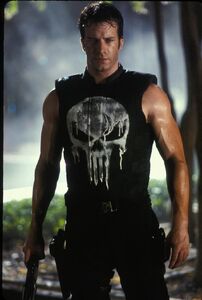 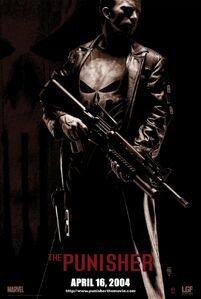