Live a quiet and peaceful life (failed).
Train Renee to be his successor (succeeded).

The Question (real name Charles Victor Szasz, also known as Victor "Vic" Sage when a newscaster) is a fictional character and a superhero in comic books published by DC Comics. The original was created by the late writer-artist Steve Ditko, and first appeared in Blue Beetle #1 (June 1967). Originally created for Charlton Comics, the character was acquired by DC Comics in the early 1980s and incorporated into the DC Universe. Following the events of the series 52, his protégé Renee Montoya has succeeded him as the Question.

He is an investigative journalist who would become the vigilante "Question" to fight against corrupt officials and politicians, but his backstory was changed to being a mystical entity in the DC Rebirth before going back to being a detective. The Question was known for his objectivism during his conception by Dikto, but he would later develop a zen-like philosophy after receiving training from Richard Dragon. He is also a member of the Justice League, Guild of Detection, Checkmate, and was a member of L.A.W., the Suicide Squad and Black Lantern Corps.

Vic Sage was a clever and extremely dedicated investigative journalist who lived in Hub City. He was investigating a doctor named Arby Twain before being approached by his old professor. The professor's name is Aristotle Rodor and he explained what he and Dr. Twain did. It was revealed that the two scientists created artificial skin which was called "Pseudoderm" which was supposed to work as a bandage. However due to an error, the artificial skin was deadly when applied to injury. Dr. Twain however did not care and still pushed for it being sold in third world countries which led to Prof. Rodor quitting and coming to Sage.

In order to catch Dr. Twain without ruining Sage's reputation, Prof. Rodor gave the journalist a mask made of Pseudoderm. WIth his identity protected, Sage went off to ruthlessly interrogate Dr. Twain to the point that he confessed his crimes, allowing him to be put in jail. Sage decided to keep the mask and continue in his investigative missions with some help from Prof. Rodor. The professor managed to create a gas which changed Sage's hair color and at some point, he kept the name "The Question". During his first few debuts in DC comics, he faces off against a villain known as "The Banshee" who has stolen a cape which grants flight.

In DC comics, The Question's story is changed in some aspects. During his childhood, he was orphaned and taken in by a strict orphanage before going to college. Some time after Sage became The Question, he was beaten by Lady Shiva before being beaten further by her thugs. The villainess decided to send The Question to a martial art master the moment he fully recovers in order to teach him combat and some philosophy. He returned to Hub City, ready to continue his job.

The Question specializes in investigating those in positions of power such as politicians and governors. He was particularly supportive of a kind-hearted politician named Myra Fermin who was married to the previous mayor. Myra however was shot by her husband, resulting in her being put in a coma which forced The Question into acting as a temporary means of justice. After Myra recovers, she and Sage rekindled their relationship.

Some time after that, The Question has a hallucination which told him to move out of Hub City for the sake of his mental health. He was later approached by his old martial art master who convinces him to do so, leaving Lady Shiva in his place for Hub City. The Question was tasked with taking care of Jackie, Myra's daughter before leaving to South America. Myra stayed behind in order to manage Hub City. In South America, Sage tries his best to put his past behind himself, only to be involved in a drug war where he was forced to kill for the first time. Jackie eventually fell ill and despite Sage bringing her back to Hub City for medical care, she could not be saved.

At some point after the events of the previous series, The Question decided to hire a successor. He chose Renee Montaya, a retired cop. During these comics, The Question suffered from lung cancer and has suppressed most of his philosophical motivations, focusing solely on training Renee. The two arrived to Gotham in order to investigate a criminal organization. Upon returning to his old martial art master however, Sage's health has already declined too much. With his dying breath, he gives Renee a choice to continue his legacy. Renee accepts and after grieving, she takes on the mantle of The Question.

The Question has appeared in "Justice League Unlimited" as a member. This iteration was particularly paranoid of various things and was often tasked with collecting information.

He also appeared in "Batman : The Brave and Bold" where he was sent to Apokolips, somehow managing to destroy the planet in the process. 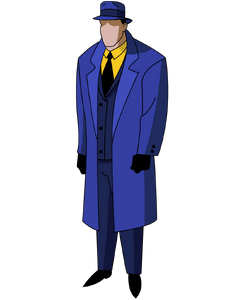 The Question in the DC Animated Universe. 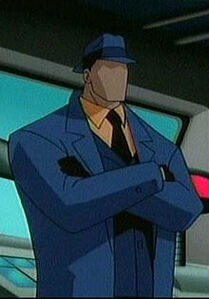 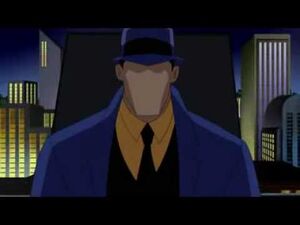