The Redeemer is a enemy to Spawn and is Heaven's version of the Hellspawn. There were three people who were given this form of the Anti-Spawn. The Redeemer (or Anti-Spawn) is Heaven's answer to the war against the Hellspawn and all the unholy forces of darkness and although working on the side of angels is not always a force that is on the side of humanity - also by his very nature, this champion of Heaven is an enemy of the current Spawn, who has dedicated himself to battling the forces of both Heaven and Hell in defense of the mortal world, which is often endangered by their apocalyptic power-struggles.There had Been Three Redeemers so far Jason Wynn, Phil Timper, and Eddie Frank. As of Spawn #300 The Redeemer had become the Reaper.

There have been three Redeemers in the Spawn series, the first one appeared in Spawn #16. This one had an alter ego of Jason Wynn, and a slightly different appearance from the other Redeemers. A Redeemer is essentially an Anti-spawn (Also his name, when he first appeared), made from Angelic fire, heavens version of necroplasm. The first Redeemer had a purple cape, a grayish suit, and was littered with many golden crosses. This Wynn redeemer felt great pain constantly, due to the angelic fire he was melded with. It could be quite possible that one of the reasons he felt such great pain was because he wasn't "Pure" enough. The redeemer was one of Spawn's most difficult enemies, in fact he was only defeated (The first time) by being distracted by alley bums, thusly giving Spawn an opportunity to defeat this Wynn redeemer. The Redeemer was called back to an angel station to be infused with even more angelic fire, but as listed earlier Wynn was not pure enough, and thusly was unable to continue his escapades as the Redeemer, he was then sent back to Earth with his mind wiped of all Spawn/Redeemer memories.The second Redeemer was a former criminal, who while in jail became highly religious. This new "Redeemed" man was named Phil Timper. Timper, released after two years for Grand Theft. Timper was last seen in a soup kitchen, giving food to homeless, before he is teleported to an angel station, where he is painfully infused with Angel Fire. It appears, however, that this Redeemer doesn't feel constant pain, unlike his predecessor. This New, and improved Redeemer was sent to Earth to track, and return a strange necroplasmic signal emanating from Spawn's homeless friend, Bobby. As the redeemer attempted to kidnap Bobby, a quick battle between Spawn, and the Redeemer ensued. Spawn was quickly defeated in his weakened state, and Bobby, along with the Redeemer, was teleported to an orbiting angel base. Soon after this battle with the Redeemer, Spawn's costume began to change to a more intimidating, armored form. Spawn then attacked an Angel base on Earth, that was in a supposed Neutral zone. Spawn then took an angel hostage, threatening to squeeze the life out of her, or blow her head off with necroplasmic energy. Spawn's suit wasn't powerful enough to cause anyone much harm, but his bluff had worked. This old angelic woman Spawn takes hostage, is hinted at later, of being God. Which later contradicts the later storyline.When the angels buy into Spawn's bluff, the Redeemer is teleported back into the station, with Spawn's friend, Bobby. A quick battle occurs, leaving the Redeemer without a hand. As angelic energy is spewing from The Redeemer's stub of a hand, Spawn, and Bobby escape from the building.

This second Redeemer appears to have nearly the exact appearance of the one before him.

There is one more Redeemer to appear in the Spawn series, however this one's appearance has drastically changed. This new Redeemer, is no longer gray, but bluish, he also is heavily armored, carries a sword, and most noticeably has two very large wings. This new Redeemer is the transformed soul of the recently injured Eddie Frank, who murdered his father due slightly to Spawn's actions earlier in the series. This Redeemer is quite a match for Spawn, until Mammon visits Eddie Franks body in the hospital, and tells him the truth behind Spawn, and his father. Eddie with his repressed memories now void, attempts to save Spawn from the hell he's recently been pulled into, requested via Coglistrio. While in hell the Redeemer is told to find a Box, that contains the last seed of Eden. Unfortunately the Redeemer is left in hell, which isn't exactly the best place for an angel to be stuck in, Until Nyx later frees him. Once free the Redeemer continues his attack on Spawn, however Spawn wins the battle by cutting the Rdeemers wings off, with his own sword. The Redeemer then transforms back into Eddie Frank, which contradicts his appearance in a hospital. The Third, Winged Redeemer.

He is also seen in most of the Spawn video games including Spawn: Armageddon as the main antagonist and the final boss of the game. And has become a fan favorite in the Spawn series.

He is also appears as a playable character in the 2000 Dreamcast videogame Spawn: In The Demon's Hand.

An Ancient Redeemer is seen in a spin-off of the Spawn series called Spawn: The Dark Ages.

He is also a character that appeared in The Grim Tales From Down Below. He is a soldier of Heaven who was sent to bring Minnie mandy's soul to Heaven.

The Redeemer serves as one of the main protagonists in the comic book series. 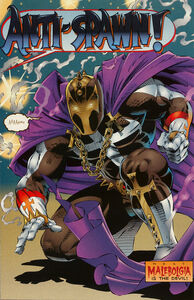 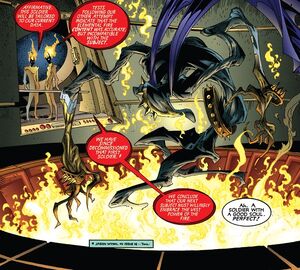 Elemental Fire is imbued into subjects to create a Redeemer. 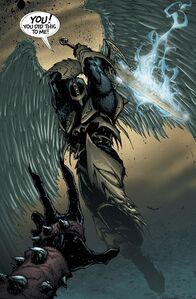 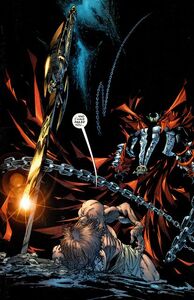 Spawn cuts off the Redeemer's wings revealing Eddie Frank inside. 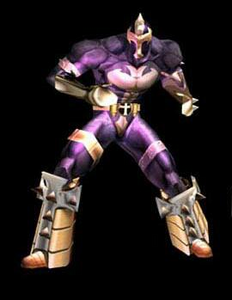 The Redeemer's appearance in Spawn: In The Demon's Hand. 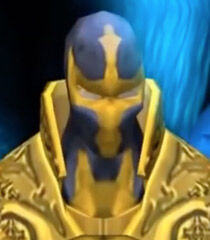 The Redeemer's appearance in Spawn Armageddon. 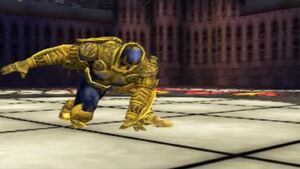 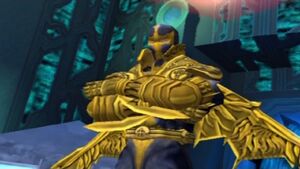 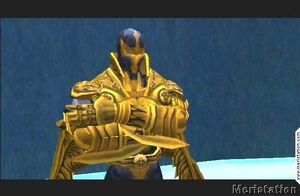 Redeemer at the final battle. 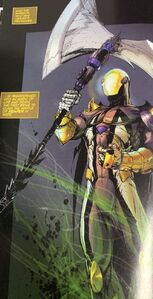 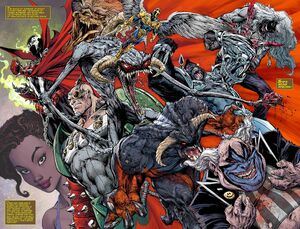 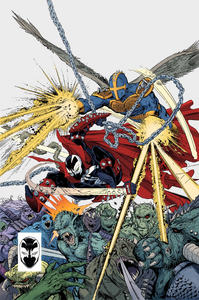 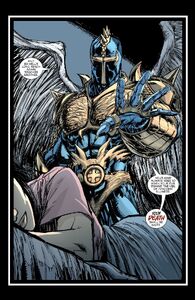 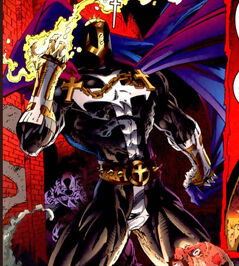 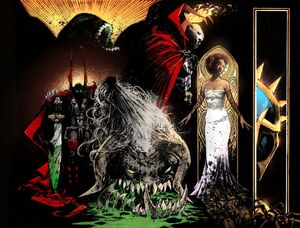 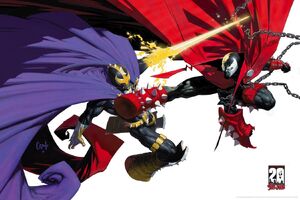 Add a photo to this gallery
Retrieved from "https://hero.fandom.com/wiki/The_Redeemer?oldid=1967290"
Community content is available under CC-BY-SA unless otherwise noted.