To play with Billy and The Snowman

Pet
The Snowdog is the tritagonist of the 2012 short film The Snowman and The Snowdog (which serves as a sequel to the 1982 film adaption of the 1978 book The Snowman).

The Snowdog is created by Billy from the leftover snow he had left from making The Snowman. He uses pieces of coal for his eyes, socks for his ears, gloves for his spots and a dried up orange (which had previously been used as the Snowman's nose) for his nose.

On the stroke of midnight, the Snowdog along with the Snowman, comes to life and befriends Billy. The Snowdog digs up a red ball (which had previously been the toy of Billy's old dog, which died sometime before) and plays fetch with Billy. When the Snowman throws the ball, it rolls into Billy's house. The trio retrieve it, but soon return outside as the Snowdog starts to melt from the heat of the fireplace.

Upon going outside, the Snowman goes into Billy's shed and finds a sledge. The trio taje the sledge and go to a nearby hill to ride it. Upon reaching the top of the hill, the Snowman sees other snowpeople flying into the sky and follows them, taking the Snowdog and Billy with him. The trio fly through London, but during the flight, the Snowman's nose falls off and lands in an airfield. They retrieve the nose and use a plane there to continue the journey.

The trio arrive at the North Pole and compete with a penguin and other snowpeople in a skiing race. The Snowman and the other snowpeople crash out of the race, but the Snowdog and Billy beat the penguin to the finish line. The duo then meet Father Christmas, who gives Billy a present.

After noticing the sun rising, the Snowdog, the Snowman and Billy fly back to Billy's house. Billy then bids goodbye to the Snowdog and Snowman and starts to go inside his house. The Snowdog starts to follow him, but Billy points out that he would melt if he went inside. After opening his present, Billy finds a collar which he places on the Snowdog, causeing him to trasform into an actual dog (thus granting Billy's wish for a new dog). Billy and the dog then bid goodbye to the Snowman before going inside to bed.

The following morning, Billy worries that the dog has returned to snow and melted as he is nowhere to be seen, but is relived when finds him waiting at the back door. The duo go outside to see the Snowman, only to find that he has melted, much to their sadness. 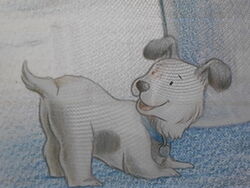 Retrieved from "https://hero.fandom.com/wiki/The_Snowdog?oldid=1682619"
Community content is available under CC-BY-SA unless otherwise noted.