To spend time with James (book and first film)

To spend time with Billy and the Snowdog (second film)

The Snowman is the title deuteragonist of the 1978 book, its 1982 television adaption of the same name, its stage adaption and it's 2012 sequel The Snowman and The Snowdog and a minor character in the 1991 television film Father Christmas.

He was made by a young boy named James one snowy Christmas Eve in Brighton and on the stroke of midnight, he magically came to life and James brought him into his house and showed him around it such as the living room where the Snowman went over to the fireplace but moved away from it as he was starting to melt from the heat. He along with James then went into the kitchen and he tried on pieces of fruit for noses before he and James went upstairs to James's bedroom and later his parents where the Snowman tried on some of the clothes.

The duo then went out into the back garden where they ride on James's father's motorbike and when they returned, the Snowman took James's hand and they flew into the sky and fly across other houses, Brighton Pier and a cruise ship. They then arrive at the North Pole where a party attended by other snowmen is happening and whilst there the duo meet Father Christmas who gives James a scarf as a present. Just as the sun is rising, the Snowman and James leave and arrive back home where they give each other a hug before James goes back into his home and into his bed.

In the morning, James goes back outside to see the Snowman only to find that he has melted.

Taking place roughly a year or so after the events of the previous film, The Snowman appears on a poster in the bedroom of two children that Father Christmas is leaving presents for.

He along with James is seen attending another snowman party. Father Christmas joins the two and says to James "Glad you could make it again. I mean the party, not your snowman".

The Snowman also alerts Father Christmas to presents still in his sleigh, which results in Father Christmas leaving the party to deliver them. It is revealed that the presents were for the British Royal Family.

The Snowman reappears in this film, which takes place many years after The Snowman.

He first appears in a photo with James which is found in a box (which also contains his hat, scarf, coal (for his eyes and buttons) and now dried up orange nose) under the floorboards of James' house by a young boy named Billy, who had recently moved there with his mother and their elderly dog (who dies shortly after).

Noticing the snow outside, Billy rebuilds the Snowman and adds the hat and scarf and coal to him and gives him a new nose. From the extra snow, Billy makes a Snowdog, using socks to make it's ears, gloves for it's spots and the Snowman' s old nose for it's nose.

On the stroke of midnight, the Snowman and the Snowdog come to life and befriend Billy. Upon entering Billy's house with the Snowdog, the Snowman notices the picture of him and James on Billy's fridge and smiles at it (perhaps meaning he still remembers his old friend) before exploring the inside of the fridge. When the Snowdog starts to melt from the heat of the house's fireplace, the trio got back outside.

The Snowman then goes into Billy's shed and sees the motorbike he and James drove on previously, before noticing a box of items, one of which is a snowglobe. He then finds a sledge, which he, Billy and the Snowdog take out to ride. The trio then notice several other Snowpeople flying into the sky. The Snowman follows them, taking Billy and the Snowdog with him. During the flight, the trio fly through London, passing the Shard, the Gerkin, the London Eye and Big Ben. At one point in the flight, the Snowman's nose falls off and lands near a plane, which the trio use to continue their journey.

They and the other Snowpeople arrive at the North Pole and compete with a penguin in a skiing race. The Snowman crashes out of the race, but watches on as Billy and the Snowdog beat the penguin to the finish line. After Billy gets a present from Father Christmas, the Snowman points out that sunrise is approaching and the trio fly back to Billy's house.

The Snowman and the Snowdog bid goodbye to Billy as he goes back inside. The Snowdog tries to follow him, but Billy points out that he will melt if he comes inside. However, upon unwrapping the present he got from Father Christmas, Billy finds a collar and places it on the Snowdog, causing it to become an actual dog (as Billy had written in his letter for Father Christmas that he wanted a new dog). Billy and his new dog then bid goodbye to the Snowman before going into the house. The following morning, Billy and his dog go outside to see the Snowman, only to find that he has melted, much to their sadness.

Between 2016-2018, The Snowman featured in Christmas adverts for clothing company Barbour. One advert featured The Snowman reuniting with Billy, who is now an adult with a wife and daughter. 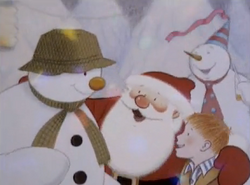 The Snowman with James and Father Christmas in Father Christmas
Add a photo to this gallery
Retrieved from "https://hero.fandom.com/wiki/The_Snowman?oldid=1684389"
Community content is available under CC-BY-SA unless otherwise noted.