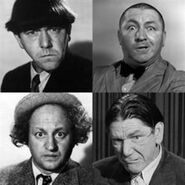 The Three Stooges in Sock-A-Bye Baby.

Shemp gets swallowed by the Ironing board.

Then Shemp gets spat out by the Ironing board.

Shemp gets so mad at the door.

The Stooges are scared of a walking skull head.

Why'd you use an ice for a pillow again for, stupid?!

Looks like you're going to jail forever for committing tax fraud.

Shemp gets scared when he sees Nikko the Goon monster.

My feet are stuck in cement!

The Stooges in Idle Roomers.

The Stooges with Lupe the Wolfman goes soaring into the sky.

Curly dreams about his tooth in pain.

Oh, So ya' twerps made a monkey outta me, huh? Why, now that I'm big, strong and hairy. Maybe I could TEAR YOU YA' JERKS LIMB FROM LIMB!!!!!

I'll find this thing OR ELSE!!

Moe's pants are shredded by a propeller.

Shemp screaming in pain after he sat on a hot horseshoe.

Moe spinning on a propeller.

The Stooges with Scooby and the Mysteries Inc. Gang.

I got a million of em. AM I MODIFIED OR WHAT?!

Curly making a funny face while his head is stuck in a block of ice.

Shemp screaming while he has a lightbulb in his ear.

Moe covered in feathers from a feather duster as he looks like an Native American Indian.

Shemp disguised as a Mummy.

Shemp is knocked out by Chopper Kane.

What are ya' taking a bath for? It ain't Saturday!

Curly sticking his tongue out after he splatters himself with a pie.

Shemp heeping after he was poisoned.

Hey, guys! How are we gonna get outta here without ruining the paint job?
Add a photo to this gallery
Retrieved from "https://hero.fandom.com/wiki/The_Three_Stooges/Gallery?oldid=2317880"
Community content is available under CC-BY-SA unless otherwise noted.