Help Rowf and Snitter survive. (succeeded, but died in the process)

The Tod is the deuteragonist of Richard Adams' 1977 book The Plague Dogs, and its 1982 animated film adaptation. He is a Geordie-accented fox who befriends the two protagonists, Rowf and Snitter, and becomes their guide to survive in the wild.

He was voiced by James Bolam.

The Tod is a crafty, wily, good-natured, sly, cunning and devious fox who loves to hunt livestock. Being a wild animal, he can come across as very selfish and manipulative. When he meets Rowf and Snitter, he agrees to help them survive in the wild in return for food. When the two dogs ask him his name, he just gives them the name of his species, because he didn't understand the concept of having a name. He takes advantage of the dogs' strength to get an easy meal and Rowf despises him as a result. He often made fun of the dogs and laughed when they failed, showing that he didn't truly care for them. He was straightforward in his insults and often left the dogs to fend for themselves. However, despite his greedy behavior, he is shown to protect them from the humans who were hunting them and even risked his life on occasion to save them, showing that he developed a strong relationship with them, even sacrificing himself to the hunters to give Rowf and Snitter time to escape.

As Rowf and Snitter kill sheep in order to survive in the wild, they eventually come across an abandoned mine, where they meet the Tod. Rowf warns him to stay and the Tod offers them to stick with him. Rowf despises him, believing him to be a cheater and thief, but the Tod makes a deal with them to help them survive in the wild in exchange for food. Snitter agrees, though Rowf is reluctant. They begin killing sheep, chickens and other livestock for days until a hunt goes wrong after Rowf kills a sheep at the wrong time in a conspicuous manner. The Tod berates him for killing a sheep in the farmer's trod and runs away. When the farmers set out to hunt down the dogs, he returns to help them and they flee the mine before the farmers could catch them.

While on the run, Snitter wakes up and comes across a Holocaust survivor, but accidentally kills him with his own rifle, forcing him to flee. Rowf and the Tod look for Snitter, but discover the hunters looking for them. The Tod convinces Rowf to leave, but he refuses and heads out to look for Snitter. He eventually finds Snitter and they head over to the residence of a pair of female shopkeepers, where they scavenge their dustbins. They drive Rowf away and lock Snitter in a shed as they phone the police. Rowf comes across the Tod and warns him that Snitter is in danger. They arrive at the shed and they tell him instructions to escape, but Snitter refuses as he hallucinates at the sight of his master. The whitecoats and the police arrive, but the Tod helps Snitter out of the shed before the police could catch him.

The trio look across the countryside and notice the Irish Sea. Snitter questions the Tod about the sea and he explains what it is to him. The Tod explains that if they're going to get there alive without getting killed, they must do what he says, otherwise there's no chance. Meanwhile, an unscrupulous reporter publishes a news article about the dogs carrying the bubonic plague and Rowf drives the Tod away for his greedy behavior after he eats a nest of chicken eggs for himself, though Snitter understands why he did it.

In the book, Snitter eventually finds the Tod being pursued in a fox hunt. The Tod orders him to go and give a positive message to Rowf, as he'd rather accept his death than go to the whitecoats. The foxhounds quickly grab him and he closes his eyes as they tear him to shreds, much to Snitter's horror.

In the film, the Tod returns and kills a hunter sent by the whitecoats to take down the two dogs as they scavenge his corpse. The trio continue walking across the Lake District to the sea, but the 3rd Battalion is involved to hunt them down. The Tod observes the army and they make a run. The Tod orders the two dogs to get to the Ravenglass train station, while he distracts the military dogs. However, he gets wounded in the process and Snitter howls. The Tod hears this and leads the dogs away, where he is mauled to death. The dogs make it to the sea, but the army surrounds them and they swim out to sea. 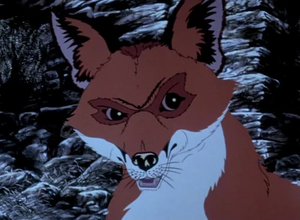 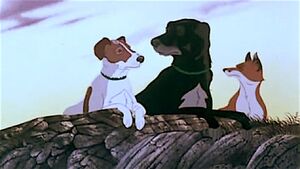 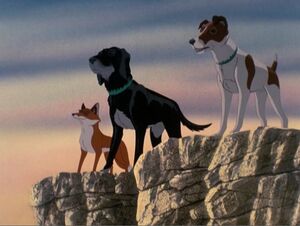 The Tod, Rowf and Snitter looking across the valley at the sea.