Swimming, making friends, being with his family

To find a family (succeeded)

The Ugly Duckling hatched in the Mother Duck and the Father Duck's nest after their four biological ducklings hatched. He was initally oblivious to his foster family's rejection by following the Mother Duck when she went to swim with her ducklings until she suddenly snapped at him to go away before turning her back to him along with her ducklings. Confused, the Ugly Duckling, who wonders why she doesn't like him, looks at the pond, and (following his initial fright) is shocked to see how different from the other ducklings he is; especially when he sees how happy they are without him around. Realizing he has no place with them, he sheds some tears and wanders away

He eventually comes across a nest of sparrow chicks in an overhead branch. Deciding that they would become his new family, the Ugly Duckling climbs into the nest but is violently chased off by the mother when he eats a worm intended for her own babies. While fleeing her attack, he retreats back into the pond where he encounters a wooden duck decoy. When it doesn't scold him or try to drive him off, he interprets its silence as acceptance and adopts it as his new mother. Unfortunately, while playing on and around his new "parent," the Ugly Duckling causes it to tip over and knock him on the head with its bill. Shocked by the sudden and unprovoked attack, the Ugly Duckling escapes to the safety of the bank where he watches the decoy turn its back on him just like the Mother Duck did.

Deciding he is too ugly to be loved by anyone, the Ugly Duckling gives up hope of ever finding a family and breaks down in tears. He takes another look at his reflection in the water to remind himself why he is all alone and turns away in disgust of himself. But as he sobs, the Ugly Duckling is approached by a group of cygnets who, to his surprise, not only look and sound like him, but actually seem happy to see him. Encouraged by their own honks, he stops crying and dives in to play with them until the cygnets' beautiful mother calls them to her side. Expecting her to reject him for his ugliness like all the rest, the Ugly Duckling decides to paddle away until the Mother Swan suddenly swims up and pulls him close, lovingly embracing him as one of her own whereupon he realizes to his joy who he really is and where he belongs.

No longer an Ugly Duckling, the Little Swan swims home along with the others when he's spotted by none other than the ducks. The Mother Duck invites him to return to them but the Little Swan realizes she only wants him now because of what he has the potential to become, and decides to remain with his true mother and siblings instead; turning his back on the ducks as he follows the swans into the distance. 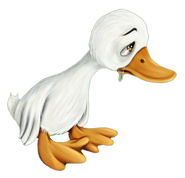 The Ugly Duckling with the Mother Duck and her ducklings 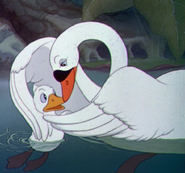 The Ugly Duckling with the Mother Swan

Retrieved from "https://hero.fandom.com/wiki/The_Ugly_Duckling_(1939)?oldid=1775715"
Community content is available under CC-BY-SA unless otherwise noted.