To live in peace with his friends

Loyal Anti-Hero
The Undertaker sometimes called Taker is one of the recurring characters featured in Camp WWE. He is portrayed as a child, but he has still his wrestling skills similiar to Kane.

He is also a intimidating and scary wrestler, but he is kind, gentle and very polite towards his friends. He is also very honest to his brother Kane.

He serves as the anti-heroic protagonist.

The Undertaker is very protective towards his friends including his brother Kane, Taker has his supernatural powers to control lightning by his psychic powers, but Taker keeps his soul alive in time to protect his friends and his loved ones. Taker can hypnotize people with mind controls for a certain time, Taker also have his gravest matches to scare its victims. Taker can lifts up his eyes in backwards on its head to scare his victims. He is a undead with his supernatural powers.

The Undertaker along with Kane are actually good friends in real life, his actual name was Mark William Calaway, his ring name is The Undertaker or simply Undertaker, then Taker by one of his friends. The Undertaker is also a friendly, gentle, polite, but very intimidating wrestler that scares his victims with his creepy eyes due to his lightning powers. 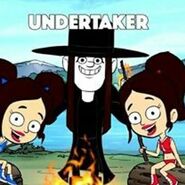 The Undertaker using his lightning powers
Add a photo to this gallery
Retrieved from "https://hero.fandom.com/wiki/The_Undertaker_(Camp_WWE)?oldid=1555596"
Community content is available under CC-BY-SA unless otherwise noted.