Heroes Wiki
Register
Don't have an account?
Sign In
Advertisement
in: Articles under construction, Animals, Male,
and 9 more

The Undertaker (Surf's Up 2: WaveMania)

Member of The Hang 5

The Undertaker sometimes called Taker is one of the main protagonists that appears in the upcoming sequel, Surf's Up 2: WaveMania.

He is one of The Hang 5 members that he has his penguin friends despite being scary and intimidating avian.

He is voiced by himself in the sequel.

He has blue eyes that he can roll his eyes up to intimidate his opponents, he has tattoos on his wings, he wears a hat on his head and he has long yellow hair.

He is very gentle that has friendly terms with Cody and their friends. 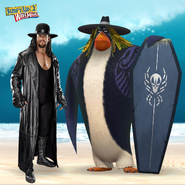 The Undertaker in Surf's Up 2: Wavemania 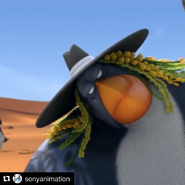