The Usos are an American professional wrestling tag team consisting of twin brothers Jimmy Uso and Jey Uso, who

Jimmy (real name Jonathan Solofa Fatu) and Jey (real name Joshua Samuel Fatu) are the sons of Solofa Fatu, better known as Rikishi, nephews of Yokozuna, The Tonga Kid, Umaga, and are part of the Anoa'i family. As part of the family they are also the cousins of fellow WWE superstars Roman Reigns and The Rock. 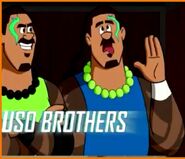 The Usos in The Jetsons & WWE: Robo-WrestleMania!
Add a photo to this gallery
Retrieved from "https://hero.fandom.com/wiki/The_Usos?oldid=1894946"
Community content is available under CC-BY-SA unless otherwise noted.