To protect Equestria from the forces of evil

The Wonderbolts are Equestria's elite fighting force of pegasi, essentially the Equestrian equivalent of the United States Air Force. They leave long trails of thunderclouds when flying, much like how Rainbow Dash leaves a rainbow streak. Their name is a portmanteau of the words "wonder" and "thunderbolt". Spitfire is the team's leader. Rainbow Dash becomes a member of the group in the season six episode Newbie Dash.

The Wonderbolts appear to be an amalgam of the United States Navy flight demonstration team, known as the Blue Angels, as well as their United States Air Force counterparts, the Thunderbirds. Their resemblance to the Blue Angels can be seen in their flight suits, which feature a shade of gold and aquamarine along with a 'winged bolt' logo, not unlike the paint scheme and 'flying shield' icon of the naval aerobatics team. To add to this, the background of their name is vaguely similar to that of the Thunderbirds.

According to Lauren Faust, the Wonderbolts' uniforms were designed by her husband Craig McCracken.

On October 22, 2013, Meghan McCarthy was asked "is the wonder bolts[sic] military? or is that just old pegaopolis[sic] traditions going on?" and responded "Watch #MLPseason4 for answers ;-)".

Many of the Wonderbolts' past uniforms shown in the episode Testing Testing 1, 2, 3 resemble those of the real-life United States Air Force and Royal Air Force, and General Firefly's uniform resembles that of an officer of the American Civil War.

The Wonderbolts are first mentioned by Rainbow Dash in Friendship is Magic, part 1 as her idolized flight acrobatics group. In the following episode, Nightmare Moon takes the form of the Shadowbolts (including "Nightingale" and two of "Descent") to lure Rainbow Dash into joining them and abandoning her friends during their quest to get the Elements of Harmony. While Dash appreciates the offer, she declines and stays loyal to her friends. Having failed to accomplish their intentions, the Shadowbolts fade into a purple mist.

The Wonderbolts attend the Best Young Flyer Competition in Cloudsdale as celebrity judges in the episode Sonic Rainboom. The winner of the competition would spend an entire day with the Wonderbolts. During the final performance, Rarity's magically-created wings burn up when she flies too close to the sun at the end of her act, causing her to plummet down toward the ground. Soarin, Spitfire, and Misty Fly take immediate action and dart for the plummeting Rarity to save her, but they are knocked unconscious by her flailing hooves. When all hope seems lost, Rainbow Dash manages to save them before they hit the ground. In the process, her extreme speed triggers a spectacular sonic rainboom that dazzles the stadium audience. When Rainbow Dash receives gratitude from Spitfire for saving each of their lives, she becomes so overwhelmed with excitement she can't voice a proper reply. Nonetheless, she gains the opportunity of spending the rest of the day with her heroes.

A Wonderbolts Derby takes place in Sweet and Elite. Five Wonderbolts take part in the race held over a cloud circuit in Canterlot. Two of the contestants resemble Spitfire and Soarin, and two are named Fleetfoot and Rapidfire, though only Fleetfoot is identified. The racers are shown in close-up three times; their composition changes in the middle, only to revert to the starting lineup by the end. Surprise and two other Wonderbolts attempt stop a grown Spike from rampaging through Ponyville in Secret of My Excess, but they are largely unsuccessful. They only manage to partly shear off the spikes on his head before being caught and trapped in a water tank. This scene pays homage to a climactic scene in the 1933 monster adventure film King Kong in which a squadron of fighter pilots perform an airborne assault against the massive gorilla as he takes his last stand on the Empire State building.

Spitfire is established as the Wonderbolts' captain in Hurricane Fluttershy. She oversees a tornado operation on behalf of Cloudsdale.

The Wonderbolt Soarin is a guest at the royal wedding in A Canterlot Wedding - Part 2 and dances with Rainbow Dash.

Wonderbolts Academy introduces the Academy: a training center for potential new members. Spitfire serves as a drill sergeant for the newest cadets. Also shown are guards and training staff, who assist Spitfire in handling the cadets. Rainbow Dash is accepted into Wonderbolt Academy along with several other Ponyville residents and the cocky Lightning Dust, though Dust is sent off after she puts other ponies in danger out of recklessness.

A Wonderbolts team comprised of Spitfire, Soarin, and Fleetfoot appear in Rainbow Falls, representing Cloudsdale at the tryouts for the upcoming Equestria Games. When Soarin injures his wing during practice, Spitfire and Fleetfoot offer Rainbow Dash to fill in for him, citing her upbringing in Cloudsdale as a qualification. Ultimately, Rainbow Dash remains with the Ponyville team and gets Soarin back on his old team. At the end of the episode, Soarin helps his team qualify for the Equestria Games.

In Testing Testing 1, 2, 3, Rainbow Dash studies for a history exam on the Wonderbolts to qualify as a member of the newly established Wonderbolts Reserves.

In Party Pooped, according to Pinkie Pie, the Wonderbolts save the out of control cherry cart from falling into a ravine in the desert, and they fly the cart to Manehattan. Her flashback shows three Wonderbolt Academy cadets saving the cart, and a photograph shows a proper Wonderbolt and one of the three cadets leaving the cart in Manehattan. Two other proper Wonderbolts appear at the welcoming party later in the episode, hosting their own booth. In Rarity Investigates!, Rarity and Rainbow Dash attend a show featuring the Wonderbolts. In an alternate timeline in The Cutie Re-Mark - Part 1, the Wonderbolts fight alongside Rainbow Dash in the war against King Sombra and his Crystal Pony warriors.

The early history and establishment of the Wonderbolts is explored in some detail in Testing Testing 1, 2, 3. Following Princess Luna's banishment to the moon, the E.U.P. (Earth, Unicorn, Pegasus) Guard was formed to protect Princess Celestia and keep the peace. At the celebration of the first celestial year of peace, an elite team of aerial performers was chosen to help commemorate the occasion. According to Twilight Sparkle, the performance was so charged with energy, magical lightning showered the crowd below. The ponies were so filled with amazement and wonder that General Firefly, the general of the aerial squadron at the time, named them the "Wonderbolts".

One of the Wonderbolts' signature flight patterns is called the Icaranian Sun Salutation, which is Princess Celestia's favorite. The Wonderbolts' first slogan, stated in Newbie Dash to have been coined by General Flash, is "Altius volantis—Soaring higher!" In the episode, Rainbow Dash says that "there were twenty ponies in the original E.U.P. Guard that became the Wonderbolts!"

The Wonderbolts are almost always seen in their uniforms which conceal their cutie marks. Their suits are azure blue with golden yellow lightning patterns and sport a uniform icon on their flanks over where the ponies' cutie marks are; the icon varies depending on the gender of the member. For males, the mark is a winged lightning bolt, while for females it is a long streak of lightning. An additional accessory are flight goggles which consists of a black frame with sky blue lenses and a golden yellow rubber headstrap. In Rainbow Dash's fantasy in The Ticket Master, when she imagines herself as a Wonderbolt, her own cutie mark appears on the suit in place of the emblem. When she fantasizes herself as a Wonderbolt again in The Best Night Ever, on the other hand, she sports the long bolt emblem usually found on any other female members' flanks. In reality, the Wonderbolts' uniforms are notably brighter than in Rainbow Dash's fantasies.

In A Canterlot Wedding - Part 2, Soarin is shown in a military shirt with collar badges, epaulettes, and black tie. His cutie mark is also shown and appears to be the male Wonderbolts flight suit symbol. In Wonderbolts Academy, Spitfire wears a dark blue uniform with a shirt and tie underneath, with epaulettes, two bars (signifying "captain" under US Air Force ranks), and medals. Unlike Soarin, her epaulette is a roundel and a single wing. Also unlike Soarin, her visible cutie mark differs from any flight suit logo.

Cadets at the Academy wear a uniform that leaves the legs and faces bare, with a larger, pale yellow lightning bolt on the front. Included with the uniform are flight goggles which consist of a golden yellow frame with clear blue lenses and a black rubber headstrap. The guards and training staff wear dark blue jackets with a lightning bolt epaulette, a cap with the Wonderbolts' insignia, and mirrored shades.

Prior to the streamlining of the Wonderbolts' uniforms by Flair d'Mare, the uniforms were somewhat bulkier, usually incorporating jackets and service or flight caps. Rarity describes the original Wonderbolts uniform as being "unattractive" and "itchy" and criticizes General Flash's use of bell-bottoms.

In the Treehouse Live! My Little Pony show, The Wonderbolts are described as Celestia's "exclusive aerial acrobatic team".

At the Grand Galloping Gala in The Best Night Ever, Rainbow Dash meets the Wonderbolts again when saving an apple pie from falling to the floor, after one of the Wonderbolts, Soarin, drops it. The orange-maned Wonderbolt, later named Spitfire, mentions their encounter at the competition where Dash saved them, and invites her to join them at the gala.

Spitfire appears again in Hurricane Fluttershy to monitor the tornado designed to bring water from Ponyville to Cloudsdale, and in Wonderbolts Academy, as the drill sergeant of the titular academy.

Two more Wonderbolts are named in Sweet and Elite: Rapidfire, a male pony, is pegged as the winner by Fancy Pants, while Rarity picks Fleetfoot, a female pony. The first pony to fly over the finish line is a white-maned mare, and the announcer declares Fleetfoot the winner "by a nose". One of the show's layout artists wrote that the white-maned pony is indeed Fleetfoot, and that Rapidfire isn't specified. Fleetfoot appears in the episodes Rainbow Falls, Equestria Games, Twilight's Kingdom - Part 1, Twilight's Kingdom - Part 2, Rarity Investigates! and Newbie Dash, and appears in the IDW comics' Friendship is Magic Issues #9-10 crashing into Big McIntosh and falling in love with him before being carted off with a concussion, Micro-Series Issue #10, and Friends Forever Issue #9. In the comics, Fleetfoot has green eyes and a winged horseshoe for a cutie mark. In the cartoon, she has fuchsia eyes and a slightly different horseshoe shaped cutie mark.

Partially translucent mini-figure toys of Spitfire, Soarin, and Misty Fly were leaked in early August 2012,[5] and their corresponding collector cards were leaked in late 2012; all three pairs of toys and cards were released in January 2013 as part of the seventh wave of mystery packs, which is themed around The Wonderbolts[6] and the Crystal Empire. Spitfire and Soarin's cards misidentify the two ponies as each other, though the wave's packaging identifies them correctly. Misty Fly's name comes both from her card and from the packaging of the wave. 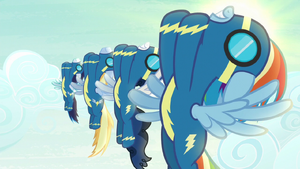 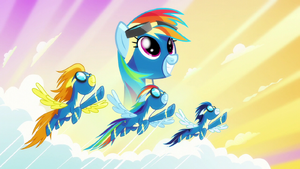 Retrieved from "https://hero.fandom.com/wiki/The_Wonderbolts?oldid=1892130"
Community content is available under CC-BY-SA unless otherwise noted.