Thea Dearden Queen, also known as Speedy, is a protagonist on CW's Arrow and is a supporting character in the Arrowverse.

She is the daughter of Malcolm Merlyn and Moira Queen, and is the half-sister to Oliver Queen, Tommy Merlyn and Saracon, and the adoptive sister and stepsister to Emiko Adachi. After being trained how to fight by Malcolm, and being saved from the Lazarus Pit, she became a vigilante and member of Team Arrow.

She is portrayed by Willa Holland.

Thea Dearden Queen was born on January 21, 1995 due to an affair between Moira Queen and Malcolm Merlyn, and was the half-sister to Tommy Merlyn, Saracon, and Oliver Queen. Malcolm was unaware that Thea was his daughter, but Robert was aware of Moira's adultery, but still loved Thea like she was his own. When she was four years old, Thea found a stray cat and brought it home, and attempted to keep it. Robert told Thea that the cat was actually a tiger, and they couldn't keep it, and she understood.

In her childhood, Thea loved Robert dearly, and idolized her older brother Oliver, and the two had a close bond, with Oliver nicknaming her "Speedy" due to her always chasing him. Every Christmas, Oliver and Thea would compete to see who could eat the holiday candy canes the fastest, and Oliver claims she would cheat to win every year. Thea also became close to Laurel Lance and Tommy Merlyn, and didn't know that she was related to Tommy until they were older.

As she grew older, Thea became created and loved to draw and color, and even drew on the walls of their home. When she was young, she fell off a horse and broke her arm, and also attended her first boy-girl dance that her father disapproved of due to her dress, and terrified her date. In 2007, Thea learned that Robert and Oliver were both presumably killed when the Queen's Gambit sunk, leaving her devastated.

Moira became emotionally distant to Thea, causing the child to feel alone, depressed, and disconnected to the world. By the time she was fifteen years old, Thea fell into a life of drugs and partying to fill in the void of losing her father and brother. Unbeknownst to Thea, Oliver survived the sinking of the Queen's Gambit, as Robert killed himself to make sure his son would wash ashore to safety.

Around 2010, Moira had became close to Walter Steele, and Thea was scolded by Tommy when he saw her drug dealer came to her after she visited Oliver and Robert's graves. Thea later sneaked into Tommy's 25th birthday party, and witnessed her drug dealer fall from a balcony and die, but it was actually her brother having killed him.

During her childhood, Thea loved her family dearly, holding her father greatly and idolizing her older brother Oliver. After their presumed deaths in 2007, Thea became devastated, and wasn't comforted by mother, who became emotionally distant due to suffering from grief. Thea became depressed, and turned to partying and drugs to fill in the void of losing two of the closest people she knew. Just like Oliver was before the island, she became arrogant, reckless and impulsive, but showed herself to be a loyal person, such as helping the criminal Roy Harper.

After working with Laurel and the Glades earthquake, Thea became responsible and dutiful, becoming the owner of a club and helping herself finically. After learning that Malcolm was her father, she labeled both Oliver and Moira liars for hiding the secret, and later left Starling City after witnessing her mother's death by Slade Wilson. After receiving training from Malcolm, Thea became a capable fighter and more responsible, wanting to stop threats and accepted Malcolm as her father. 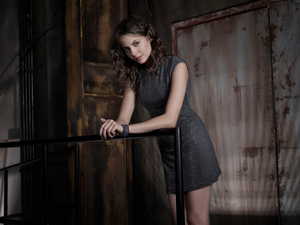 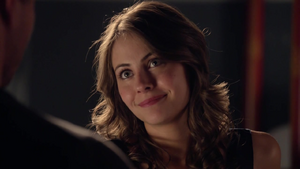 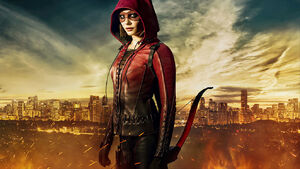 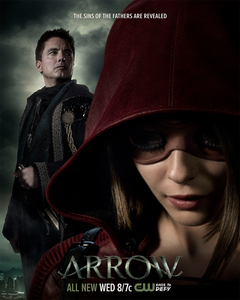 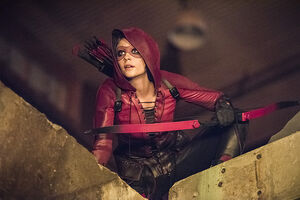 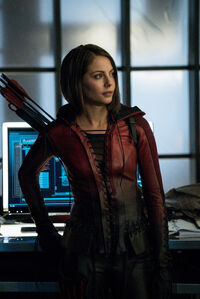 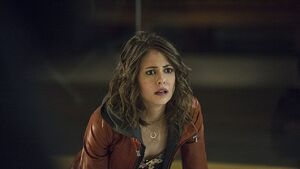 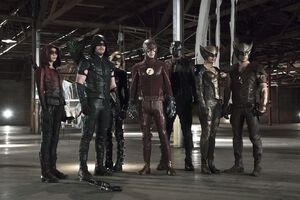 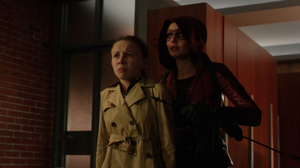 Thea threatens to kill a young Nora Darhk.
Add a photo to this gallery

Retrieved from "https://hero.fandom.com/wiki/Thea_Queen?oldid=1907913"
Community content is available under CC-BY-SA unless otherwise noted.