Tommy
Greenie
Shank
To be killed by Group B

Creator of the Maze

Glader
Member of the Right Arm

Restoring the peace of friends and relatives

To defeat Ava Paige, Janson, and WCKD and avenge his loved ones.

To find the cure to the ones infected by the Flare Virus (all succeeded).

The Chosen One
Betrayed Hero

Thomas is the titular main protagonist of the Maze Runner series.

Thomas is portrayed by Dylan O'Brien, who is known for portraying Stiles Stilinski in Teen Wolf, Mitch Rapp in American Assassin, and voicing Bumblebee in the 2018 titular film.

In the beginning of the movie, Thomas wakes up in a underground service elevator with no memory. Thomas sees a group of males around him. Gally opens the underground service elevator doors and throws him onto the ground, Thomas runs away from the group of males but falls on the ground. He gets put into the pen. Alby introduces himself to Thomas and shows him around the Glade and the stuff they do, asks Thomas what his name is, and tells him that he'll get it back by two days or so. Alby tells Thomas the three rules of the Glade. Thomas learns that the Maze is the only way out of the Glade. Alby calls out a boy named Chuck and tells him to show Thomas around the Glade, Thomas asks him why no one told him why he can't go into the Maze. Chuck tells Thomas that they can't go in there. While Chuck is still talking about the off limits of the Maze. Thomas sees Minho and Ben running out of the Maze and starts to walk towards the Maze but was stopped by Gally.

The film begins with Thomas being taken in by Ava Paige and troops from the organization WCKD, alongside other abandoned children, after being dropped off by his mother for his own safety. Years later, shortly after being rescued from the Maze, Thomas and the remaining Gladers – Teresa, Newt, Minho, Frypan, Winston, Jack, and Tim are taken to a facility run by Janson. He explains that the facility is a safe haven, protecting them from WCKD, the Flare virus and the Cranks, and provides them clothes, food, and sanitation, where other survivors of multiple Mazes are also present. Thomas becomes curious about their activities and manages to find out what is really happening behind the closed doors. With help from Aris Jones, the first maze survivor to end up in the facility, it is revealed that WCKD's leader, Ava, is still alive and that Mr. Janson is working for WCKD, as they discuss about the experiment on the Immunes and that Janson has yet to find the Right Arm, a resistance group located at the mountains. The group, including Aris, but without Tim escapes the facility, as Janson orders his WCKD troops to track them down, where they find themselves in the deserted outside world – the Scorch. The group arrive at an abandoned marketplace, where they first encounter the Cranks, humans zombified by the Flare virus. In the process, Winston gets infected by one of them, and Jack is killed by another. When morning comes, they find the remains of the city in ruins and that WCKD is still searching for them. Winston's infection gets worse, forcing the rest of the group to leave him alone to die by shooting himself, preventing his transformation. The group continues to venture the desert until one night, while sleeping, Thomas wakes to discover a civilization off in the distance. As a thunderstorm emerges, they run to an abandoned facility to take shelter. Minho gets struck by the lightning on the way but survives. They manage to enter the place, only to find out that the facility was filled with chained Cranks. The group meets Brenda and Jorge, who lead a dangerous band of survivors and have used the Cranks as their own guard dogs. When the two find that the group had come from WCKD and is looking for the Right Arm, the two agree to take them to the Right Arm, abandoning their group of survivors. Moments later, WCKD, led by Janson, storms the place, only for the facility to be destroyed by Jorge's explosives, however, Thomas and Brenda are left behind as the rest have escaped with Jorge. Thomas and Brenda manage to escape the Cranks, only for Brenda to get infected by a Crank in the process. Thomas experiences a flashback of when he and Teresa were working for WCKD, in which Thomas tries to warn Teresa of WCKD's plans, only for the two to be separated by WCKD's troops. As Thomas and Brenda reunite with the rest of the group, Jorge interrogates Marcus, a survivor who secretly works for WCKD, into revealing the whereabouts of The Right Arm. The group eventually arrive at The Right Arm's relief camps, where other innocent survivors are present, and are greeted by Vince, who leads the Right Arm and is in charge of deciding whether they can stay or not. As Brenda's infection gets worse, Vince threatens to shoot Brenda, only to be stopped by Mary Cooper, a former WCKD scientist who reveals that Thomas was their informant. As Mary halts Brenda's infection using an enzyme cure, Mary explains that the enzyme can only be harvested from an Immune's body, not manufactured, and that arguments over the methods of manufacturing the cure with Ava lead Mary's departure from WCKD. That evening, Teresa calls WCKD of her location, believing that WCKD's motivations are good, leading to an ambush by WCKD. Ava and Janson arrive and confront the Right Arm before WCKD troops captures survivors for experimentation, including Minho, while Janson shoots Mary dead. After Thomas and the Right Arm fend the WCKD troops off, Ava, Janson, and Teresa retreat with their captured survivors. With only a fraction of survivors left at the site, Thomas plans an infiltration into WCKD and is determined to take them down to save his friends and save civilization, Thomas threatens to kill Ava Paige and Janson as his friends and the Right Arm agree to help and prepare to fight back.

Thomas, Newt, and Frypan are the last of the "Gladers" immune to the Flare virus that has infected the world's population. Against the orders of the Right Arm resistance led by the newly sworn Vince, the three leave their camp base to rescue their immune friend Minho, who is being tested by the organization WCKD for a Flare cure, heading for the "Last City" where WCKD's headquarters is located. The group make their way through a tunnel, only to be attacked by Cranks, humans zombified by the Flare. However, they are saved by Jorge and newcomer Brenda, who journey with them to the Last City. The group make it to the edge of the wall of the Last City, which surrounds and protects the city from Cranks. Outside the wall, the group walks among Flare-infected people who are rallying in protest to be let into the city. However, WCKD's troop patrol opens fire at the protesters, who retreat. In the commotion, Thomas, Newt, Frypan, Brenda, and Jorge are captured by a group of masked men and taken to a hideout by them, where one of the masked men is revealed to be Gally, who has survived being impaled in the chest with a spear by Minho. Thomas punches Gally in the face for killing Chuck. Gally takes them to see Lawrence, a rebellion leader for the infected, who grants Thomas, Newt, and Gally permission to enter the Last City through a secret entrance, while Frypan, Brenda, and Jorge stay behind. Spotting Teresa, Gally tells Thomas that she can get them in, and Thomas gets Teresa to follow him into an alley where Gally captures her. The group take her to an abandoned church where she agrees to help them, as long as they need to use her fingerprint to get inside WCKD. Teresa also removes the Gladers' trackers that WCKD put in them before they entered the Maze. Thomas, Newt, and Gally escort Teresa inside WCKD and toward the location of the Immunes. They are caught and chased by a vengeful Janson, who leads WCKD's troops, intent on killing Thomas. Teresa lets them escape to find Minho, before running off to do a blood test on Thomas' blood she got from removing his tracker, after it is revealed to her that Brenda was cured by Thomas' blood after she was previously infected. Outside the headquarters, Gally finds Thomas, who has given Janson the middle finger, Newt, who had apparently been infected, and Minho, who is shocked to see that Gally is alive. Thomas sends Minho and Gally ahead before Newt gives him a necklace with a silver cylinder on the end before passing out. Teresa transmits her voice throughout the city, telling Thomas that his blood can save Newt and all that he needs to do is to return to WCKD. However, Newt regains consciousness, almost as a Crank, and attacks Thomas, begging for him to kill him. With no other option, Thomas mercifully stabs and kills Newt. Thomas makes his way to WCKD and confronts Ava, who stresses that WCKD's intentions are only for the good of the world. However, she is shot in the back by Janson, who is turning into a Crank. Janson knocks out Thomas and drags him to a medical room where Teresa is ready to extract his blood. However, he reveals that he and WCKD are only truly interested in curing those whom they please, which results in Teresa turning on him. After a fight, Janson is killed, allowing Thomas and Teresa kiss and escape to the rooftop where a helicopter piloted by Brenda and Jorge is. Thomas makes it aboard, but to his horror, Teresa falls to her death as the WCKD building collapses from explosions brought on by Lawrence's army. Thomas, Minho, Gally, Frypan, Brenda, and Jorge reunite with Vince and the rest of the Immunes and the Right Arm, escaping to a safe haven that was revealed by Ava. There, Thomas discovers that the necklace Newt gave to him had a note concealed in it from him to Thomas. Still traumatized by Teresa's death, he reads the note, in which Newt tells him to look after himself and everyone, before thanking Thomas for being his friend.

In The Maze Runner, Chuck tells Thomas that he was around five foot nine and also describes him (probably jokingly) as being as "ugly as fried liver on a stick". He tells Thomas that he looks like sixteen years old. Thomas is shocked, because he feels older than that. He is, however, younger than Newt, who is repeatedly referred to as "the older boy". In The Kill Order, Thomas is described as having sandy brown hair. In the films, Thomas is portrayed by actor Dylan O'Brien, who is known for his role as Stiles Stilinski in the TV series Teen Wolf.

Thomas has always been an inquisitive person, before and after being sent to the Maze. He has a habit of becoming frustrated when answers are kept from him, something he experiences on a regular basis. In The Maze Runner, Thomas starts off as timid and somewhat aloof, but steadily grows more bold and sociable throughout the series. He does not easily give up on anyone and would rather rush back and help them than leave his friends behind. 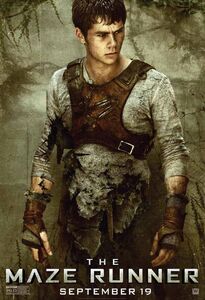 Thomas in The Maze Runner. 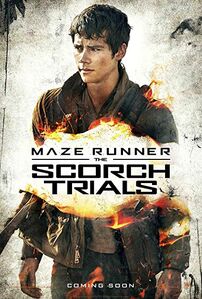 Thomas in The Scorch Trials. 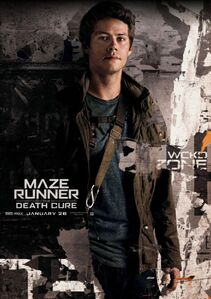 Thomas in The Death Cure. 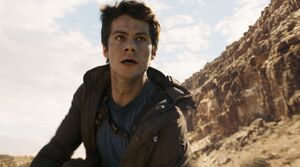 Retrieved from "https://hero.fandom.com/wiki/Thomas_(Maze_Runner)?oldid=1868278"
Community content is available under CC-BY-SA unless otherwise noted.