To be a real man (succeeded)

Insecure hero
Thomas is a supporting character in the 1995 film, Pocahontas.

He is voiced by Christian Bale.

Thomas serves as John Smith's best friend, fellow soldier, accomplice, and sidekick in the film. Thomas appears to be a fairly young man, as he is shown saying good-bye to his parents and younger sister before boarding the ship. He also appears to be very inexperienced in life. For most of the film, he is fairly incompetent, being a poor sailor, soldier, and shooter. But, by the end of the film, he is able to take leadership among the settlers and have Ratcliffe arrested, after Ratcliffe showed his true colors when he inadvertently shot John.

At the beginning of the film, Thomas is one of the settlers going to the New World as part of the Virginia Company. We first see him say goodbye to his family as he boards the ship. He meets Ben and Lon, and later is amazed to learn that the legendary John Smith is going to be the captain. Thomas remarks that he has heard some amazing stories about the man.

During the voyage, a storm strikes. Thomas is attempted to help secure the ship's cannons, but falls overboard in the process. Thankfully, he is rescued in a daring move by Smith. Thomas later confides to John his plan to make his fortune in the New World, as well as his willingness to shoot any of the "savages" that get in the way of his goal.

At the New World, Thomas is assigned by Governor Ratcliffe to help dig for gold. During the process, the settlers spot a small group of Indians. Assuming they are there to attack, Ratcliffe orders a defense. Thomas grabs a gun, but accidentally trips over a log, resulting in him nearly shooting an enraged Ratcliffe. After the skirmish, Ratcliffe finds Thomas lying at the bottom of the log, and orders him to learn to shoot properly, saying that he will not be considered a man if he does not. Later, Thomas is seen working with Smith, Ben, and Lon on a fence for the Jamestown settlement. He hopes the fence will keep anyone and anything out (though Meeko gets in), but assumes that John is feeling bad about missing the skirmish with the Indians and consoles him about it. Later, when Smith seems to be missing from the settlement, he goes out to look for him and nearly shoots at a returning Smith in brief fear. When a sorry Thomas lowers his gun and remarks that he could have killed John, John notes that his bad aim, in which he shoots with one eye open, makes that doubtful. John advises Thomas to keep both eyes open when he shoots. Brief tension arises between John and Thomas when John claims to have made friends with an Indian woman, Pocahontas, and suggests that they find a diplomatic solution instead of fighting the Indians. He and all the other settlers are also shocked when John told Ratcliffe that there are no golds, and were left stunned by their argument.

That same night, Thomas spots John sneaking out of camp. Thomas is ordered by Ratcliffe to follow John, and to shoot any Indians he comes upon that may approach him when Ratcliffe hands him a musket. Ratcliffe leaves Thomas with a warning to not disappoint him again, citing his earlier failures as a sailor and soldier. Thomas follows John, and, to his shock, finds him kissing Pocahontas in Grandmother Willow's glade. He watches as John is suddenly attacked by another Native American, Pocahontas's fiancé Kocoum who was been sent by Nakoma. Believing his friend to be in mortal danger, Thomas intervenes and shoots Kocoum, killing him. An enraged Pocahontas charges at him, but John stops her, saying that he was only trying to save him. As other warriors who heard the gunshot arrive, John orders Thomas to leave, choosing to take the blame in the hopes that Thomas's life will be saved so he can alert the other settlers.

At camp, Thomas informs the settlers of John's capture, and begins rallying the settlers to attempt a rescue mission. Ratcliffe takes advantage of the situation, and incites the settlers to kill all the savages and save Smith. Secretly, however, the greedy governor wants the gold he incorrectly believes the Indians to be hiding. Though most of the settlers are quite happy to comply, Thomas is shown looking somewhat discouraged, having seen John and Pocahontas kissing, a sign that a diplomatic solution may very well be possible.

At the battle, Thomas watches as John's execution is narrowly prevented by Pocahontas. Ratcliffe orders the settlers to fire, but Thomas refuses, citing that John has been let go and that the Indians have no intention of fighting them. Ratcliffe, still hungry for gold, takes matters into his own hands and attempts to shoot Powhatan, but hits John who pushes Powhatan out of the way, leading the settlers to believe that he had done it intentionally. Now realizing John was right all along and they should never have listened to Ratcliffe in the first place, Thomas takes control, and taking Ratcliffe's gun from him, he orders the governor arrested, chained and gagged, and runs to John's aid.

Later, Thomas oversees the preparations to return both John and Ratcliffe back to England. When Pocahontas arrives, he personally tells her that John must return to England for medical treatment, or he will die, to which Pocahontas responds by gently putting a hand on his shoulder, indicating that she has forgiven him for killing Kocoum, knowing he had tried to save John's life. After Pocahontas talks with John and they say their goodbyes, Thomas sees John off with Lon, choosing to stay at Jamestown with Lon to carry out and continue the settlement there. 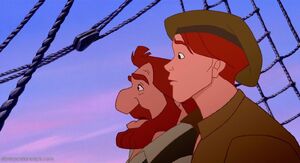 Retrieved from "https://hero.fandom.com/wiki/Thomas_(Pocahontas)?oldid=2267978"
Community content is available under CC-BY-SA unless otherwise noted.