Leader of a Team Military Commandos

Stop Curien's plan to spread the zombies on to the world and save Sophie. (succeeded)

Stop the outbreak that was cause by Goldman. (ongoing)

Thomas Rogan is a major character in The House of the Dead video game series. He is an AMS agent who was called to the Curien Mansion in 1998 by a distress call from his fiancée, Sophie.

He was voiced by David Nowlin.

Agent Rogan has proved his dedication countless times under trying conditions. Despite his reputation for being a hot head, he displays keen judgement and decision-making under fire. Rogan recently became engaged to DBR employee Ms. Sophie Richards, and has met Dr. Roy Curien several times in the past.

The same year as Lisa's birth, a second infestation in Venice, Italy was organized by Curien's financier, Caleb Goldman. Rogan's level of involvement with the case is unknown

In the good ending, Rogan also appears at the entrance of Goldman's headquarters. He would assures agents James Taylor and Gary Stewart that partners Amy Crystal and Harry Harris are safe. Rogan has ends by saying "On we go, to our next battle."

The hero of the Curien mansion incident of 1998, Rogan is also Lisa's father. Rogan's career after the incident continued to be marked with his courage and excellent, judgement, and he, too, pursued the causes of the world collapse. But now he has lost many comrades in the battle with unknown creatures, and contact with Rogan himself has been lost. 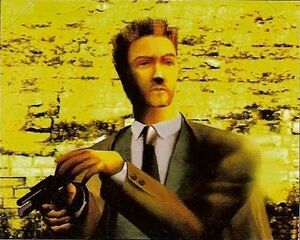 Retrieved from "https://hero.fandom.com/wiki/Thomas_Rogan?oldid=1912844"
Community content is available under CC-BY-SA unless otherwise noted.