Make his son give up the Batman mantle. (Failed)

Tragic Vigilante
Thomas Wayne of the Flashpoint timeline is an alternate version Batman who hunts down criminals to protect the citizens of Gotham City. However, unlike his son, he is willing to kill the villains he faces and wields firearms. Thomas Wayne is the deuteragonist of the movie Justice League: The Flashpoint Paradox, and is voiced by Kevin McKidd.

Joe Chill kills Bruce Wayne rather than his parents. Thomas Wayne wishes revenge so takes up the mantle of Batman, but unlike his son he is more ruthless in his actions as he is happy to kill any criminal that gets in his way. Thomas tracked down Chill and was going to poison him, but decided to beat him to death with his bare hands. His wife Martha Wayne is so traumatized by the event that she lost her sanity and cut her face into a garish grin, becoming the Joker.

During his years operating as Batman, Thomas cornered a thief known as Catwoman during a bank heist. However, he decided against killing her upon learning she had no family and because she reminded him of his son. Instead, Batman and Catwoman became a crime fighting duo, which caused Thomas to abandoned his lethal methods due to the happiness he felt working with her. Unfortunately this did not last as Batman relapsed back into his more violent ways when Catwoman was shot by the Joker and confined to a wheelchair.

Joker later kidnaps the twin children of Judge Dent. When Thomas tracks down one of her partners in crime, Yo-Yo, he interrogates her to find his wife's location, but she refuses to cooperate and he throws her off the building. However, at that moment, Cyborg arrives to catch her and Batman jokes "she slipped". Cyborg asks Thomas to join him in stopping the war between the Amazons and the Atlanteans that has devastated Europe, but he refuses.

Later that night, the powerless Barry Allen is looking for Batman, and enters the Batcave, but Thomas attacks the unknown intruder. He is taken back when Barry kept calling him Bruce and says he knows he is Batman. Thomas is shocked but wished to learn more about his son and his life in the alternate timeline. Barry convinces Thomas to help rewrite the timeline and the first step was getting Barry's powers back. Thomas creates a device that will recreate the accident that created the Flash. The first attempt was a failure, leaving Barry badly burnt, but after one more, the Flash was back.

Batman is called by Chief Gordon, who tries to convince him that he does not have to fight villains by himself, however Batman refused. Later, Batman is shocked that the Joker had footage of his friend James Gordon being killed. She tricks Chief Gordon into shooting Dent's daughter by taping her mouth shut and disguising her as the Joker. Before Batman confronts her, she slashes Gordon's throat. After Gordon's murder Batman turns-up to face his ex-wife. Batman tells her he has discovered a way rewrite history so Bruce was never killed. He told her about Barry Allen and how he helped him restore his powers. Martha with this knowledge is shocked to learn the hardships her son will go through, she run to her death off a cliff near Wayne Manor.

Thomas works with the Barry to recruit a team to alter the Reverse-Flash changes to the timeline. Batman contacts Cyborg and attempt to find Project Superman the government branch responsible for raising an alien Kal-El who is supposedly the most powerful being on the planet. When they find him all they see is a pale skinny man but when he is exposed to sunlight his powers activate and he flies away.

The group of heroes escape the facility with the help of Element Woman, but Barry's memories begin to change and Thomas is forced to inject him with a drug which slows down his brain processes.The heroes head to Fawcett City to find the team known as S.H.A.Z.A.M. a group of Teenagers who can combine their powers to become Captain Thunder.

Using the powers of Billy Batson they are able to slow down the effects of the combination of the Speed Force and the altered timeline itself on Barry's brain. The team decide to stop the war between Wonder Woman and Aquaman, because there is no guarantee that they would win against Professor Zoom. Thomas reluctantly agrees and the heroes head for New Themyscira in the Batplane, they also recruit Enchantress for the mission. Wonder Woman and Emperor Aquaman are locked in battle when the team arrive.

Batman stabs Professor Zoom in the back with a sword and while Professor Zoom gloats that Barry had created the timeline not Zoom. The Flash did this when he attempted to go back in time save his mother, but Batman is fatally wounded by the Enchantress, who was truly an Amazonian spy. Before the Flash can run to the past in an attempt to stop his younger self from altering the timeline, Thomas, realizing what Flash was planning to do after despite learning his inadvertent role, thanks him for all he has done and gives the Barry a letter addressed to his son, and accepts his fate.

After Barry apparently restores the timeline to an approximation of its prior self, he visits Bruce Wayne and gives him a letter from his father, and told him he could not of done it without his help. Bruce is deeply touched that his father has sacrificed his existence itself for him.

Despite The Flash's success in fixing the timestream, the Flashpoint timeline continued to exist, held in place by a mysterious force. The Flash returns to this timeline along with Thomas' son Bruce Wayne while investigating the existence of a button found embedded within the walls of the Batcave. Thomas immediately attacks them upon their arrival as he thought them to be a trick.

But Flash convinces him that they traveled to his world using the Cosmic Treadmill and need his help to repair it. After fixing the Treadmill, the Flashpoint timeline suddenly begins to vanish around them. Bruce is held back by The Flash as he begs his father to come with them to their world. However Thomas refuses and instead tells Bruce to give up the Batman mantle so he can pursue a happier life.

The timeline seemingly disappears completely afterwards, although it is later revealed that Thomas was brought to mainstream timeline by a vengeful Reverse Flash during DC Rebirth and eventually began working with Bane to end Bruce Wayne's crusade as Batman. However, despite his efforts, Thomas was unable to make Bruce relinquish the Batman mantle and was sent to Arkham Asylum for his crimes. 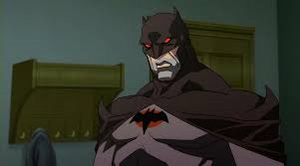 Thomas Wayne in the film version.