The adventures of Tintin

Fighting crime, Helps Tintin and Captain Haddock in them adventures

Stopping Criminals everywhere in the world.

Thompson and Thomson are major characters in the comic book series, The Adventures of Tintin.

In the 2011 movie, they were voiced by Nick Frost and Simon Pegg.

In Japanese dub from the movie they were voiced by Jin Urayama and Toru Okawa.

Of the 19 books following the Cigars of the Pharaoh, not including the unfinished Tintin and Alph-Art and the cartooning of Tintin and the Lake of Sharks, they appear in 17. The only two books they do not appear in are Tintin in Tibet and Flight 714. Although their appearances may vary in importance depending on the album, they always add humor to the story and sometimes are involved in subplots, eventually achieving success by sheer luck or with Tintin's intervention.

Members of Scotland Yard and Interpol, Thompson and Thomson lead more or less discrete and efficient investigations. They are hardly brilliant. They test the limits of discretion, dressing up in folkloric costumes in order to "blend in," which inevitably only leads to them sticking out more. They also pile up an incredible number of falls, slips and accidents. The epitome of stupidity, they followed their own footprints in the desert. Their total disorganization is also reflected in their language. They are experts in pleonasms and have to their credit sayings such as "I would say even more," "our lips are sealed," and "it is my opinion and I share it." Their motto, as mentioned, is "Mum's the word," which is immediately corrected to be "Dumb's the word." Also, Thomson always states "to be precise," and then either restates the statement his twin said or says the sentence mixed-up, such as instead of "He's given us the slip. Got away, with the handcuffs too. What a cheek," he says "To be precise, he's given us away. Slipped us the handcuffs, too. What a sneak." Their introduction is also humorous; Thompson identifies himself as "Thompson, with a p, as in psychology...", philosophy, or any other "p" word in which the beginning "p" is either silent or coupled with an "h" in order to change pronunciation to an "f" sound, Thomson's intro is a similar sounding, "Thomson, without a P, as in Venezuela" or any other amusing sounding name not starting with a "p". 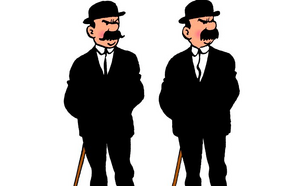