Defeat Loki and save the world

Thor is an Asgardian god of thunder and a powerful warrior in Asgard. His rival is his adoptive brother Loki. He is one of the first five heroes who founded the Avengers after Graviton's defeat.

Thor is the Norse god of Thunder. He has grown tired of the endless wars of Asgard, and believes that by acting as a hero on Earth, he can make more of a difference. This creates a conflict, in that his fellow gods desire for him to return to Asgard so that he may help defend it whilst their father, Odin, sleeps to replenish his powers.

Thor’s unique physiology of half-Asgardian and Half Elder God grants him the typical powers of an Asgardian God but he is much stronger than the typical members of his race. According to his father, Odin, Thor is not at full potential yet but when he is, Thor will be even more powerful than he is. Thor has been stated to be the most powerful being on Earth and one of the most powerful heroes in the Marvel Universe. He's often stated to be the heavy hitter on the Avengers team alongside his rival the Hulk. Likewise, Thor is quite capable at hand to hand combat, holding his own against the entire Masters of Evil until he was separated from Mjolnir. He also can shoot lightning, control the weather, and create portals to other realms. 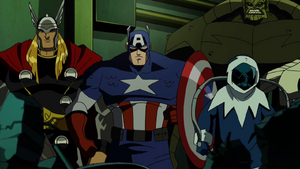