Turning from his baby form into a elderly dragon,


Ability to turn the monsters into elderly monsters,
Fire power.

He is an effect monster in the anime, he is a fusion monster in real-life deck. He is also an elderly dragon that was transformed from Baby Dragon with the effect of Time Wizard.

Thousand Dragon makes his first appearence in Yu-Gi-Oh! Season 1 Duel Monsters Episode 6 where he was transformed from his baby self into a old dragon with the effect of Time Wizard.

Thousand Dragon has the ability to turn the monsters into elderly monsters with the help from Time Wizard's effect. He has the same attack and defense like Red-Eyes B. Dragon. He was famous where he ages Mai's Harpie Lady Sisters to decrease their ATK to 1300. In the other episode, he turned Dark Magician into Dark Sage with Time Wizard's effect. 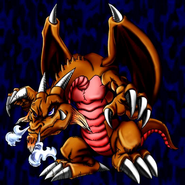 Thousand Dragon as he appears in the cartoon

One of Thousand Dragon's close-up face