Thrall (birthname Go'el) is a central protagonist in the Warcraft franchise. He is the son of Durotan, former Warchief of the restored shamanistic Horde, founder of the nation of Durotar in Kalimdor and one of the second wave of shaman.

His parents killed by Gul'dan's assassins shortly after his birth in the beginning of the First War, he was found and raised by Aedelas Blackmoore who gave Thrall his name. Raised as a slave and gladiator, he later joined Orgrim Doomhammer in freeing the orcs imprisoned after the Second War, being named Warchief after Doomhammer's death. After leading the Horde away from the Alliance-claimed Eastern Kingdoms, he rescued and made allies of the Darkspear trolls and Bloodhoof tauren. Thrall led the new Horde against their former demonic masters in the Battle of Mount Hyjal. He subsequently led diplomatic efforts at peace between the Horde and Alliance after the end of the Third War.

After the fall of the Lich King and the increasing elemental unrest heralding the Cataclysm, Thrall stepped down as leader of the Horde, appointed Garrosh Hellscream as Warchief, and joined with the shamanistic Earthen Ring to combat the rampaging elements, eventually aiding the Aspects in Deathwing's downfall.

Despite Thrall’s open acceptance of visitors into his society, the orcs have not yet relinquished all of their old hatreds and preconceptions about other races. Still, they honor his leadership and will treat visitors to Durotar fairly, albeit somewhat roughly. He takes individuals at face value and treats them with respect until their actions prove that they should be dealt with otherwise. Even when crimes are committed, the harshest punishment that Thrall will mete out is exile — banishment into the almost lifeless wastelands of the Barrens, where the elements judge who lives and who dies. However, if someone under his leadership causes dishonorable and unnecessary bloodshed, or worse, consorts with demons, Thrall's policy is clear: a death sentence carried out with the help of the Doomhammer.

To friends, Thrall is warm and generous, freely swapping stories and information. Hospitality is extended to everyone, but Thrall expects all visitors to contribute in some way to Orgrimmar’s survival. Visiting hunters often bring meat or fur in exchange for refuge from the elements, and human traders from Theramore Isle periodically bring casks of salt ale and seed for crops. While in Orgrimmar, visitors are under Thrall’s protection and he will not tolerate any threats or violence against them.

Thrall is a natural-born leader. He is rarely alone, and in battle often spends much of his time directing his troops. In solo combat his tactics are subtle. He mixes a judicious amount of melee with powerful spellcasting to great effect. 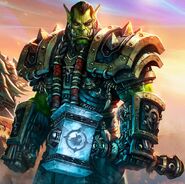 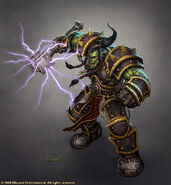 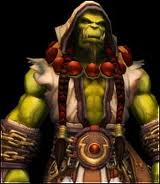 The World Shaman
Add a photo to this gallery

Retrieved from "https://hero.fandom.com/wiki/Thrall?oldid=1865721"
Community content is available under CC-BY-SA unless otherwise noted.