King of the Woodland Realm

King of the Elves of the Wood

Elf Monarch
Thranduil is one of the major protagonists in J.R.R. Tolkien's Middle-earth legendarium, appearing in The Hobbit. He is the father of Legolas, who was a member of the Fellowship of the Ring

Thranduil was born the only son of Oropher. He lived in Greenwood the Great. In the year 3434 of the Second Age, Thranduil became king of his kingdom after his father, Oropher was killed in battle.

In the original book, Thranduil remains unnamed, and is only referred as the Elven King.

He captures Thorin and Company and imprisons them within his dungeons, but they are later saved by Bilbo Baggins. A few nights later, Thranduil amasses an army and joins forces with Bard and both believe they have a claim on the treasure due to Smaug destroying Lake-town. Bilbo later gives Thranduil and Bard the Arkenstone

He fought and survived the Battle of the Five Armies and was given the emeralds of Lord Girion. He gave the title of "Elf-friend" to Bilbo after the hobbit gave Thranduil a necklace of silver and pearls.

Thranduil appears in Rankin and Bass' The Hobbit. However, he was given no name and only is referred to as the Elven king. He was voiced by the late German filmmaker Otto Preminger.

Thranduil plays a larger role as a major protagonist in Peter Jackson's The Hobbit trilogy and is portrayed by Lee Pace.

The Hobbit: An Unexpected Journey

Thranduil appears in the beginning of the film, where he visits Thrór and tries to touch the white gems that once belonged to his wife. However, Thror refused to let Thranduil have the Gems of Lasgalen back.

Thranduil later appeared again after Smaug had invaded the Lonely Mountain, where Thorin yells for them to help his people. However, Thranduil refuses to risk the lives of his kin and leads his army away from Erebor, causing Thorin to develop a hatred of Elves.

Thranduil appears on his throne after the capture of Thorin and Company. Thranduil offers to release the Dwarves from captivity and help them in their quest to reclaim the Lonely Mountain if Thorin will give Thranduil a share of the treasure. Thorin refuses, recounting the time when Thranduil refused to help his people during the siege of Smaug in the Lonely Mountain. As Thorin continues his narrative, Thranduil looks horrified and angry. He demands that Thorin should not talk to him about dragon fire, for he has suffered from it himself, having "faced the great serpents of the North." At this point—by temporarily either creating or removing an illusion—he briefly shows himself with severe burns on the left side of his face, including a missing cheek and an apparently blind left eye, and asserts that it was Thrór's greed that incurred the dragon's wrath. He then orders his guards to take Thorin away. Additionally, Thranduil is more antagonistic toward the Dwarves in the films, locking them in dungeon cells as soon as they arrive, whereas in the book, he was more generous, giving the Dwarves (aside from Thorin, whom he had previously captured and imprisoned) free run of his stronghold until they proved insulting and disagreeable toward him.

Later, Thranduil confronts Tauriel, telling her that as a captain of the guard, she must drive the Giant Spiders out of Mirkwood. She explains that new spiders would enter the kingdom after the previous ones were wiped out, and suggests sorties to destroy the spider's source outside the kingdom's boundaries near Dol Guldur, but Thranduil quickly dismissed this idea due to his isolationist doctrine. When she brings up that other lands would also be susceptible to spiders, Thranduil says that he doesn't care about other lands. He mentions then that Legolas, his son, has grown fond of her, but that she should not give him hope, because she is a common Silvan elf and Legolas is the son of a king. Thranduil is once again seen when Legolas and Tauriel return with an Orc hostage, Narzug. He is interrogated, but refuses to answer, mocking Tauriel about the impending death of a dwarf. Thranduil dismisses Tauriel after she threatens to kill the Orc, commenting that he doesn't care about the death of one dwarf. However, when Narzug begins to mock Thranduil about a coming great war, saying his master serves The One, the Elf-king swiftly decapitates the captive with a stroke of his sword, clearly fearful of what the Orc had revealed. When Legolas asks why he did that when the Orc could have told them more, Thranduil replies, "There was no more he could tell me." Reminded of his promise to free the Orc, Thranduil replies, "I did free him. I freed his wretched head from his miserable shoulders." He then orders for all the gates to the kingdom to be closed, now knowing that the dangers of war were upon them, stating "No one enters this kingdom, and no one leaves it."

Thranduil first arrives in Dale giving supplies to the lakemen after they lose their town to Smaug's attack. He informs Bard that he came to reclaim a jewel necklace in Thorin's possession. Bard is aghast at the prospect of fighting for jewels, but Thranduil doubts that a Dwarf can be reasoned with. He nevertheless agrees to give Bard a chance to convince Thorin to give in. Bard fails and Thranduil orders his army to march. Elsewhere, it is revealed to Tauriel by Legolas that his mother- Thranduil's wife -was taken prisoner to Gundabad, where she died, and that Thranduil never speaks of her. When Gandalf arrives, he urges Thranduil to forget about it and informs him about the Necromancer's plan to revive Angmar and that Thorin was never intended to reach Erebor, for Azog the Defiler had been sent to kill him and his company before they were anywhere near the mountain. When Bilbo gives them the Arkenstone in the hopes they can use it as leverage to convince him to give him the shares of the treasure that are either theirs or he promised them, a war nearly breaks out when Thorin remains defiant and Dain and his forces subsequently arrive to provide backup. However, the arrival of Azog and his massive legion of Orcs and Dain leading his army to deal with them calls it off. Thranduil refuses to help Dain initially, but after Gandalf tells him that its madness not to fight the Orcs, he relents and sends his swordsmen into the fray while his archers rain down death.

However, Azog realizes that the armies cannot fight on two fronts and sends the rest of his army to Dale to cut them off. This forces Thranduil to retreat with Bard, Gandalf, Bilbo and a large portion of his army to the city, all the while killing a few Orcs. Upon entering the city, he is dismounted and surrounded, but easily kills his assailants and continually participates in the battle, but is aghast at how much Elven blood has spilled in defense of a Dwarven land, and rather than either warn Thorin or help Dain, attempts to take advantage of the respite to pull out. However, Tauriel stands defiantly in his way and declares that he will not turn his back on the other races this time. When she not only refuses to move, but criticizes him further for not having any love in his life or in himself, he swiftly slices her bow apart and criticizes her in turn for being in love with Kili since he doesn't believe her "love" for him is real. At that point, Legolas steps between them and informs him he will have to kill him too if he wishes to slay her, before the two head off to help Thorin and those accompanying him to confront Azog on their own. Later on, after departing or staying to aid the Dwarves, Thranduil finds Tauriel weeping over Kili's body and she asks why love can hurt so much. Moved by the sight, along with the memory of his wife's death at Angmar's hands, he tells her "Because it was real" and agrees with her plan to bury Kili, and after he accepts Legolas's decision to be on his own, advises him to meet up with the ranger Strider (Aragorn) and informs Legolas that his mother loved him more than anything else in this world. He is not seen again afterwards, but it is safe to assume that after the funerals and burials, he departed for Mirkwood. 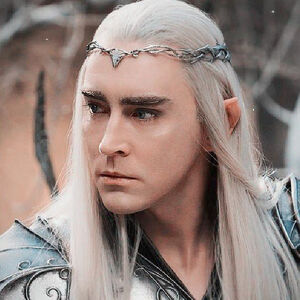 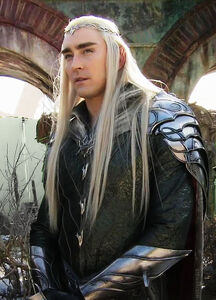 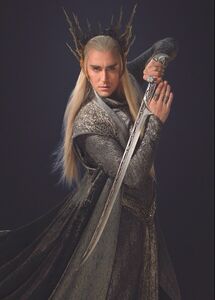