Big Brother (by his sisters)

Mr. and Mrs. Hare's son, Brother of his sisters, Bambi and Flower's friend

Playing with Bambi and Flower.

Help his best friend Bambi in any way he can (succeeded).

He was voiced as a child by Peter Behn and the late Tim Davis in the first film and Brendon Baerg in the second film whilst as a young adult, he was voiced by the late Sam Edwards.

Thumper first appears in the film along with his mother and sisters and several other animals going to visit the newly born prince and his mother. When the prince attempts to take his first steps, Thumper remarks that he's kinda wobbly, only for his mother to make him repeat what his father had told that morning which was "If you can't say something nice, don't say nothing at all." As the animals start to leave, Thumper asks the prince's mother what she's going to call him. to which she replies that she thinks she'll call him Bambi.

A few days later, Thumper meets Bambi and his mother again where he takes it upon himself to teach Bambi various tricks and help him talk which he succeeded with Bambi saying words such as "bird", "butterfly" and "flower". When Bambi accidentally used the word flower on a skunk, Thumper tried to correct him, but the skunk said that he didn't mind. During the winter, Thumper tries to teach Bambi how to skate on a frozen pond, but Bambi kept slipping.

Years later, Thumper (now a young adult) meets with Bambi and Flower again where they are warned about getting "twitterpated" by Friend Owl and that they would eventually fall in love, though the trio believe this won't happen to them. However shortly after, Thumper meets and falls in love with a female rabbit and eventually has daughters with her, who join him when he and the other animals go to visit Faline after she gives birth to her and Bambi's children, Geno and Gurri.

Set in between the events of Bambi's mother's death and Bambi's young adulthood, Thumper appears when hiding from his sisters but they find him and say that their mother said for Thumper to take them to see a groundhog (who could tell if spring was on the way if he had no shadow) to which Bambi (and later Flower and Faline) joins them. To their joy, the groundhog has no shadow, meaning spring is coming, but the groundhog then runs back into his burrow after being frightened by a older fawn named Ronno.

Bambi finds it hard to connect with his father, The Great Prince of the Forest, so Thumper gives him lessons on how to impress his father. After an encounter with a porcupine, Thumper along with Bambi and Flower encounter Faline and Ronno again where Ronno starts to tease Bambi for being friends with Thumper and Flower to which Thumper in an effort to get Bambi to stand up to Ronno, pushes Bambi forward, causing him to knock Ronno into mud. Ronno then chases Thumper and Bambi through the forest until, the duo escape him with Bambi leaping over a bank. Thumper along with Flower and Faline later appear when Bambi bids farewell to them when he prepares to leave with his new adoptive mother Mena. Thumper, Flower and Friend Owl arrive and see the Great Prince crying over a supposedly dead Bambi's body after he battles Man's dogs, but luckily, Bambi wakes up and nuzzles his father causing Thumper to cry on Flower's shoulder.

Months later, Thumper retells the incident to the other animals before a now teenage Bambi arrives. Thumper was unhappy about the fact that Bambi won't have anytime with his friends anymore due to being with his father most of the time. But after Faline remarks how wonderful that is for Bambi, Thumper agrees and accepts it. 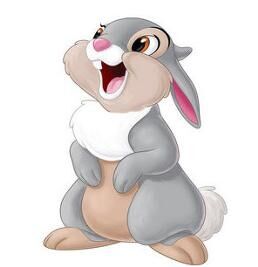 Thumper and his sisters 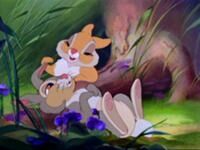