The Thunder God Tribe or the Rajinshuu are a group of Fairy Tail Mages led by Freed Justine, who exists as "bodyguards" for Laxus as well as his friends. They are major antagonists in the Fighting Fesival Arc alongside Laxus. However after Laxus' excommunication and eventual reinstatement the group eventually became whole and were accepted by their former enemies

The Group was formed by Laxus, to serve as his bodyguards and also serve him. The group was led by Freed Justine who he considered himself the "self-proclaimed captain" of the group. Originally the group members were distant mages in Fairy Tail, but after Laxus's excommunication they became more open to their guild members and at times fight alongside them.

Laxus Dreyar - The leader of Thunder God Tribe. All members of the tribe answers to him.

Freed Justine - He is the Captain of the Thunder God Tribe and a close friend of Laxus Dreyer. His magic is called Dark Écriture, magic that enables him to write runes.

Evergreen - A member and also the only member of the Thunder God Tribe is also a close friend of Laxus Dreyer. She wields two magics, Fairy Magic and Stone Eyes.

Bickslow - A member of the Thunder God Tribe and another close friend of Laxus. His magic is Human Possession, a magic that allows him to seal human souls and manipulate them as he sees fit. 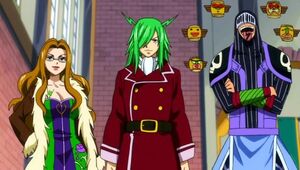 Minus Laxus
Add a photo to this gallery

Retrieved from "https://hero.fandom.com/wiki/Thunder_God_Tribe?oldid=1619250"
Community content is available under CC-BY-SA unless otherwise noted.