Protect mutantkind and bring honor to the Apache people

Thunderbird is a Marvel Comics superhero, associated with the X-Men.

John Proudstar was born on an Apache reservation in Camp Verde, Arizona. Throughout his life, John regarded himself as a loner and an outcast, and wished to prove himself as a warrior in the tradition of his ancestors. Dissatisfied with the complacent lives of his people on the reservation, John lied about his age and enlisted in the United States Marines. Despite advancing to the rank of corporal and earning several medals, John still wasn't satisfied after his tour of duty ended.

His mutant powers manifested themselves for the first time when he was 20 years old, when he wrestled a bison to save a little girl, and won. He was approached by Professor Charles Xavier, creator of the mutant superhero team the X-Men, and was offered membership in the Professor's new team of X-Men. John accepted, and joined the team.

He would die in action on his second mission, while attempting to stop the villainous Count Nefaria from escaping capture from the X-Men in a jet. John pummeled the plane until it exploded, killing him.

John would briefly return from death on two occasions. The first was when Selene Gallo used the transmode virus to resurrect Thunderbird and other fallen mutants. John was laid back to rest by his younger brother and X-Force. The second was during the Chaos War, when the gates of the Underworld opened, allowing John and other dead X-Men to return from the grave. Led by John, they fought the Carrion Crow, a minion of the Chaos King, and after invoking the powers of his namesake; Thunderbird, God of the Apache, John was able to defeat the Carrion Crow, repair the lay lines of Earth, and return to his grave.

The X-Men would later recruit James Proudstar, (AKA Warpath) John Proudstar's little brother who has the same powers as John had.

Superhuman Stamina: Thunderbird's muscles produced less fatigue toxins than the muscles of ordinary humans. He could exert himself at peak capacity for several hours before fatigue began to impair him.

Superhuman Durability: Due to the increased density of his skin and muscle tissues, Thunderbird's body was somewhat more resistant to physical injury than an ordinary human. Although far from invulnerable, he was capable of withstanding impact forces and blunt trauma that would have severely crippled or killed an ordinary human with only mild to moderate discomfort.

Superhuman Respiration: Thunderbird's lungs were oversized, and his respiratory system was developed in such a way as to allow him maximum wind and endurance with a minimum of oxygen intake. These features made Thunderbird a natural outdoor fighter and athlete. 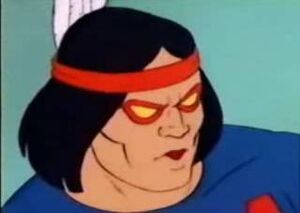 Thunderbird in Spider-Man and His Amazing Friends

Thunderbird in the X-Men animated series 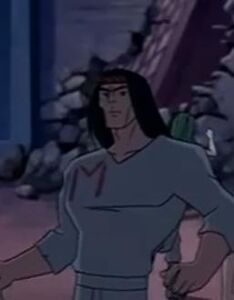 Thunderbird in Wolverine and the X-Men