Skilled at summoning the Warp Star

Help Kirby to save the world from NME. (succeeded)

Tiffany "Tiff" Ebrum (known in Japan as Fumu and as such in an Anime which her fans, the Otakings, make in the episode Geek Anime! Fumu-tan of the Stars!) is the deteuragonist in Kirby: Right Back at Ya!, known for her intelligence. Her name is just given as Tiff in the anime itself, so the name given here is an extrapolation. She is Sir Ebrum and Lady Like's daughter, and Tuff's older sister. She is shown to be smart like Kirby is in the games.

Tiff is another character exclusive to the anime series. She lives in King Dedede's castle along with her mother Lady Like, her father Sir Ebrum, and her brother Tuff. She is pretty much the main character in the series, after Kirby of course. When the little hero first arrived, Tiff was very annoyed. She had pictured the Star Warrior as big, brave, and handsome. But quickly enough, she realizes that Kirby is a hero after all. She is actually the only one who can summon Kirby's Warp Star, apparently because she cares so much for him.

Tiff looks a little bit like her mother and father. She has yellow skin and hair, orange shoes, and green eyes. She wears a pink and green shirt, that covers her whole body. She styles her hair in a braid type ponytail, kept back with a purple band.

As for Tiff's personality, well, it does vary. Occasionally she can be snooty and stuck up, like many little girls are. Tiff is one of the few who are always suspicious of King Dedede's evil and greedy ways. She tries to persuade the others to see what he's doing but they rarely do. Once Tiff warms up to Kirby, she treats him a bit like a very little brother. She loves and takes care of him, even if Kirby really is strong enough to do it himself. 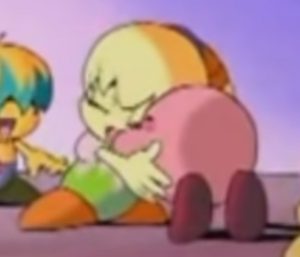 Add a photo to this gallery
Retrieved from "https://hero.fandom.com/wiki/Tiff?oldid=1731800"
Community content is available under CC-BY-SA unless otherwise noted.