Tiger (Over the Hedge)

To protect the house (Formerly)

To protect his new family

Tiger is a Persian cat who is the pet cat of former owner Gladys Sharp and the supporting character in Over the Hedge. He helped the animals to defeat their enemies and currently lives with Stella and the other wild animals in the woods.

He is voiced by Omid Djalili in the film, who also voiced Yusuf Amir, and by Michael Gough in the video game.

Tiger is a sturdy, fluffy, big, obese Persian lilac point cat with a flat, round face, small ears, a dark brown nose, white teeth, short legs, small paws and bright blue eyes. He can't smell due to his very flat face. He used to wear a blue-gray collar until he decided to live in the woods.

Tiger has been shown to be pretty selfish, skeptical to strangers, and also quite protectful over his territory. He's also shown as being self-centered (initially), dramatic, passionate, caring, flirtatious, proud, flamboyant, loud and "regal", in that he constantly talks about his beauty, and how he has inherited his beauty from generations of Persian cats. He really loves Stella. He seems to be quite intelligent and appears to have a pretty large vocabulary as he knows words such as 'luminous' which he uses to describe Stella's eyes. Once he was very rude and judgmental towards the animals. After reuniting with Stella in the woods, Tiger becomes more laidback, carefree, and friendly.

In the film, he orders Stella (who was disguised as a cat) to leave "with her filth", thus upsetting her and making her stand up to him. In turn, Tiger is amazed that someone stood up to him for the first time and thus, began to fall in love with Stella. 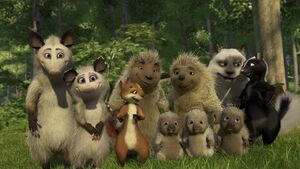